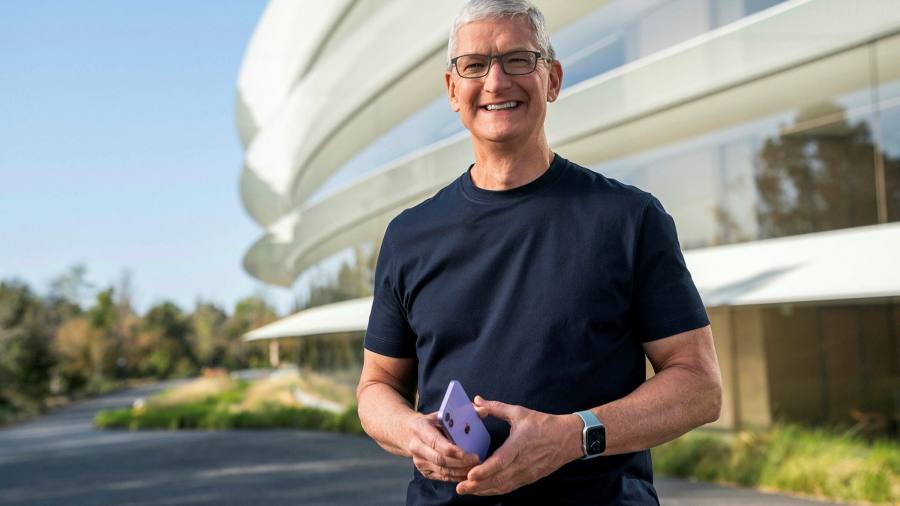 Sign up to myFT Daily Digest to be the first to know about Technology sector news.

Apple’s big launch event of the year is the iPhone 13’s next Tuesday, yet all the talk ahead of that this week has been about smart glasses and cars.

In an FT opinion piece, tech analyst Benedict Evans says Apple has mastered with metronomic precision bringing out every year a new handset that sells half a million units a day and provides 40 per cent gross margins.

But glasses and cars are two very big projects that may be its next big thing, he says, or maybe not. On glasses, ”there are basic, unsolved optics problems, and we don’t know if Apple has the answer, or when it might. Apple Glasses might launch next week, or next summer, or never”.

“Cars are a puzzle as well. Apple might design a better Tesla-type vehicle (and build one, with its $207bn of cash), but what problem would that solve?”

Lex is sceptical about Facebook’s glasses launched with Ray-Ban on Thursday. It sees uptake as being limited for specs that allow the wearer to take photos that do not typically include selfies, and buyers may also be deterred by privacy issues. But this does seem a first step on the road to the augmented and virtual reality “metaverse” that Mark Zuckerberg predicts.

Apple has been enjoying growth for its Watch, with its increasing health monitoring capabilities, and it seems significant that, according to Bloomberg, the Watch chief Kevin Lynch will now oversee its Titan self-driving car project after Doug Field left for Ford this week.

The move suggests that Apple is not set to abandon the car but has yet to figure out where to go with a secretive project it began around 2014. Still, no rush: the iPhone 13 will give Titan’s team plenty of breathing space.

1. US judge orders App Store to open up
Apple’s iron grip on its App Store has been loosened by a US federal judge, who ordered it on Friday to stop interfering with apps that wished to take payments outside of the store. Epic Games has also taken its battle with Apple to South Korea, where the company has sought to have its hit game Fortnite restored to the App Store under a world-first law in the country that loosens app payment restrictions. Brooke Masters says Apple remains dug in for a long war.

2. UK proposes GDPR changes
The UK government has put itself on a collision course with data privacy campaigners and the EU with a suggestion that the right to have a human review of some decisions made by computer algorithms could be removed. The idea is part of broad-based plans for a big overhaul of the UK data regime after Brexit.

3. The establishment and the cult of crypto
Stablecoins and decentralised finance will challenge banks’ business models and monetary authorities must act more quickly to develop official digital assets, said veteran policymaker Benoît Coeuré of the Bank for International Settlements in a speech on Friday. FT Magazine this weekend looks inside the cult of crypto.

5. Hedge funds muscle into Valley
Hedge funds are elbowing their way into Silicon Valley at an unprecedented rate with a record-smashing $153bn worth of investments in private companies in the first six months of 2021.

Gaming journalists expecting Sony to unveil a dull update to the PlayStation 5’s operating system last night got a pleasant surprise as its showcase produced major content announcements set to boost the console’s popularity. It included a first look at a new God of War game, a Spider-Man sequel and news of a remake of the classic 2003 Star Wars role-playing game Knights of the Old Republic. There was a March release date given for Gran Turismo 7 and the unfortunate slippage of Grand Theft Auto V from November to March. Axios has more.