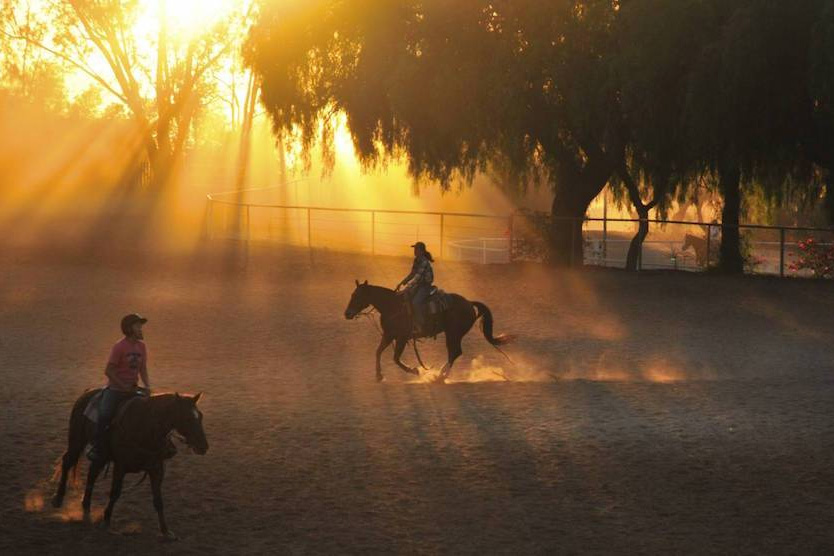 Since its founding in 1889, The Thacher School in California has required every student to care for and learn to ride a horse.

“Students are confronted with real work and real responsibility,” according to the high school’s description of its Horse Program, which builds “tenacity, self-confidence, humility, patience and so much more … as students face the challenge of a new riding technique or a stubborn horse and take full responsibility for the animal’s care.”

The roots of the venerated program — which includes 130 horses and 10 heads of cattle — are planted in Gymkhana Field, a vast horse-riding arena that has spawned more than a century of memories among generations of students and alumni.

“Gymkhana Field provides a place for over 100 horses and riders to bond,” said Elle O’Hill, a second-year horseback rider. “It has seen records broken and victory laps, and over 100 years of hoofs pounding on the dirt.”

When Lucy and I — both students at Thacher — discovered that the Bureau of Land Management (BLM), the U.S. agency that administers federal lands, owns the below-surface rights to Gymkhana Field, our first question was, what could happen in the future?

Would we return to campus, 50 years later, and find fracking pumps excavating the land, guzzling the field dry?

The short answer: no. Not in the near future, at least.

But our investigation has exposed a conflict between our economy’s need for oil, on the one hand, and the environmental risks of fracking, on the other. That antagonism has spurned a contentious and convoluted legal process that underscores why it’s important to vote so you can influence how land dear to you is developed.

Our school has never owned the rights to any oil below campus.

Despite owning the right to use the surface of the land as part of its 427-acre campus, Thacher has never owned the below-surface mineral rights to Gymkhana Field.

We learned that this dual ownership — where the property rights to the surface and to the underground are split between two parties — makes Thacher a “split estate.”

During the 19th century, as settlers spread across the American continent into the West, the federal government purchased or seized land, mostly from Native Americans, that eventually became new states such as California.

In the mid- to late 19th century, the federal government surveyed the land to see if it held natural resources. According to Ed Bennett, Director of Facilities at Thacher, authorities discovered that gas, oil and thorium, a radioactive metallic element, existed under Gymkhana Field.

The government has kept ownership of the resources below the surface, along with 47 million other acres of subsurface mineral estate in California.

Lawsuits focus on the environmental impact of fracking.

In 2014, the BLM announced that they would open up a swath of land, including Gymkhana Field, for possible oil drilling and fracking. The land included 1.2 million acres of subsurface estate in Santa Barbara, San Luis Obispo and Kern counties.

The decision triggered a legal battle between environmental groups and the BLM that lasted half a decade and which highlights the importance of voting in state and national elections.

The first lawsuit came in 2015. Two environmental organizations, the Los Padres Forest Watch and the Sierra Club, won the suit, saying the BLM had not adequately analyzed the environmental risks of fracking, a process of drilling down into the earth before a high-pressure water mixture is directed at the rock to release the gas inside.

A judge ordered the BLM to prepare a supplemental Environmental Impact Statement (EIS).

We interviewed Rebecca August, Director of Advocacy at Los Padres Forest Watch, who explained the challenges of fighting the BLM. Former U.S. President Donald Trump’s administration, for example, imposed limits on the length of comments and expedited the study.

The BLM received some 16,000 written comments on the draft EIS, of which 6,000–7,000 passed through Forest Watch. But August said the BLM categorized thousands of comments as a single statement.

“Scientists and students and recreators and authors and educators and people from all across the Central Coast commented with different concerns about the study,” August said. “The BLM said that they were not original, so they counted them as one.”

The comments are available to the public in the BLM’s supplemental Environmental Impact Statement.

Our school said fracking would cause irreversible damage.

Thacher told the BLM that it opposed any drilling on campus.

“Our school would be materially and adversely affected by any mineral extraction or other industrial activity on or near our campus,” Thacher said in a comment submitted to the BLM. “We believe such activity would irreversibly damage the School, its heritage and its history.”

Nearby Cate School also wrote to the BLM to oppose fracking.

“Having endured the Thomas Fire and the Central Coast mudslides in the last nine months, the eco-system is as fragile as it could be,” Cate Headmaster Ben Williams wrote in 2019. “But even more important, this is a corner of the world that seeks to care for our natural resources, not exploit them.”