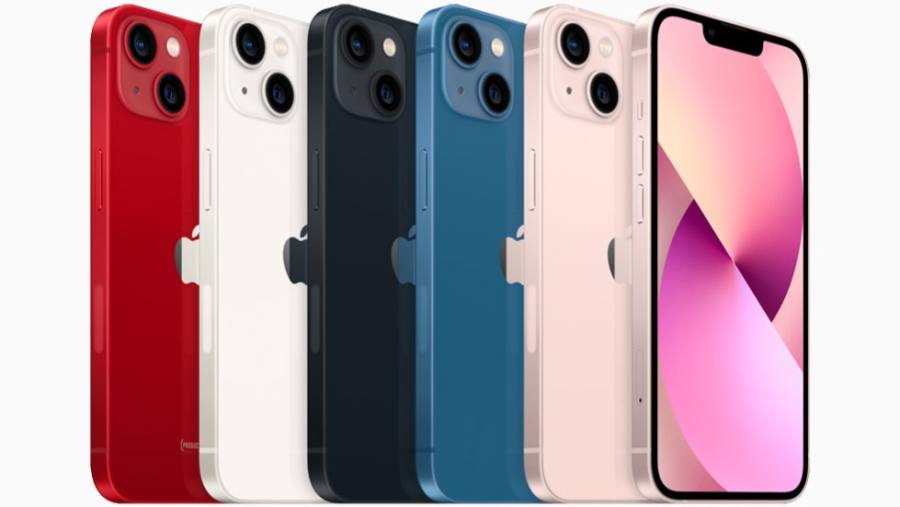 Apple’s grip on its App Store’s developers may have been loosened by last week’s legal ruling, but its assured hold on hardware in the shape of the iPhone seems as unshakeable as ever.

The unveiling of the latest model at its Silicon Valley headquarters today was unspectacular to say the least, but the Trendforce research firm still expects the iPhone 13 to account for nearly 40 per cent of 230m units produced this year, a 15.6 per cent rise on 2020’s total numbers. Wedbush analysts say older models are ripe for replacement, with around 250m of Apple’s near 1bn iPhones having not been upgraded for over three years.

For the record, the 13 comes in five new colours, has a 28 per cent brighter display and uses a next-generation A15 chip. There is a dual-camera system, with the main Wide camera having a bigger sensor for brighter results and better low-light and night mode performance. The second camera is a 12Mp Ultra Wide unit. Video features a new Cinematic Mode that allows professional focus transitions. There are more 5G bands, battery life on the 13 mini is an extra 90 minutes and the bigger 13 will last 2.5 hours longer. The mini starts at $699 and the regular 13 from $799, with 128GB starting capacity and a new 512GB storage option. The Pro and Pro Max have a brighter Super Retina XDR display and three cameras, with the addition of a telephoto lens. They start at $999 and $1099 for the Pro and Pro Max and there is a 1TB storage option. The phones will be available on September 24.

A new Watch series and two upgraded iPads were also announced, details below in Tech Tools.

1. Apple fixes Pegasus vulnerability
Ahead of the release of its iOS 15 operating system, Apple has had to patch up its old one, in order to address a new vulnerability that has allowed hackers to deploy Israeli company NSO Group’s spyware tool through iMessage. Researchers discovered the flaw when they analysed the infected iPhone of a Saudi activist. Meanwhile, South Korea’s antitrust regulator has fined Google Won207bn ($177m) for abusing its market dominance in mobile operating systems.

2. Chinese police exploit anti-fraud app
Chinese police are using a new anti-fraud app installed on more than 200m mobile phones to identify and question people who have viewed overseas financial news sites. A dozen individuals also told the FT they were uncomfortable giving the app 29 permissions, including live monitoring of call logs, text messages and conversations. The FT View on payment app Alipay having to turn over its loans data to a new entity is that this will offer the state yet another means of monitoring Chinese citizens

3. ‘Alexa, start surgery’
Amazon, long assumed to be a sleeping giant in healthcare, is finally awakening, with plans to produce tools and platforms to underpin an industry on the cusp of dramatic modernisation. But can the ecommerce company navigate the competition, which includes fellow tech giants Google and Microsoft, and a political landscape fearful of its power? asks The Big Read.

4. Carmakers taking bigger chip hit
Estimates of the likely hit to car production from semiconductor shortages have shot up in recent days by nearly 1m, to 9.5m vehicles. Belated efforts to revive Japan’s chip sector are doomed by too little investment, too few engineers and far too little government expertise, according to one industry veteran.

5. The return of Parler
George Farmer, a 31-year-old former hedge fund partner and the Oxford university-educated son of a British baron, has been plotting a route back for the “free speech” social network that attracted millions of Donald Trump’s supporters in the run-up to last year’s US election. Hannah Murphy interviewed him about his plans for the controversial app.

As well as the iPhone 13, Apple unveiled a new Watch and two updated iPads at its online event today. There were no new health sensors announced, but the Watch Series 7 offers 20 per cent more screen area than the Series 6. There are thinner borders so the overall size on the wrist is still similar and the smartwatch is designed with softer, more rounded corners. The display is brighter indoors and shows 50 per cent more text on screen. The watch has been made more durable and there is 33 per cent faster charging. The Series 7 is available in five new colours. but not until later in the autumn, starting at $399.

There were new iPads with updates for the mini and the most popular and affordable iPad. The mini has a thinner design and new colours and a better and larger 8.3in edge-to-edge display. The processor and graphics processor are 40 per cent and 80 per cent faster respectively. The 12Mp rear camera has a flash added and there is video recording up to 4K. The front camera has a 12Mp Ultra Wide lens, allowing Center Stage video calls where the camera can track and centre the subject. Speakers are improved and the mini will be available next week from $499.

The regular 10.2in iPad has a next-generation A13 Bionic processor, making it 20 per cent faster. Front and rear cameras are improved, allowing the Center Stage feature. It starts with double the storage, at 64GB, from $329.