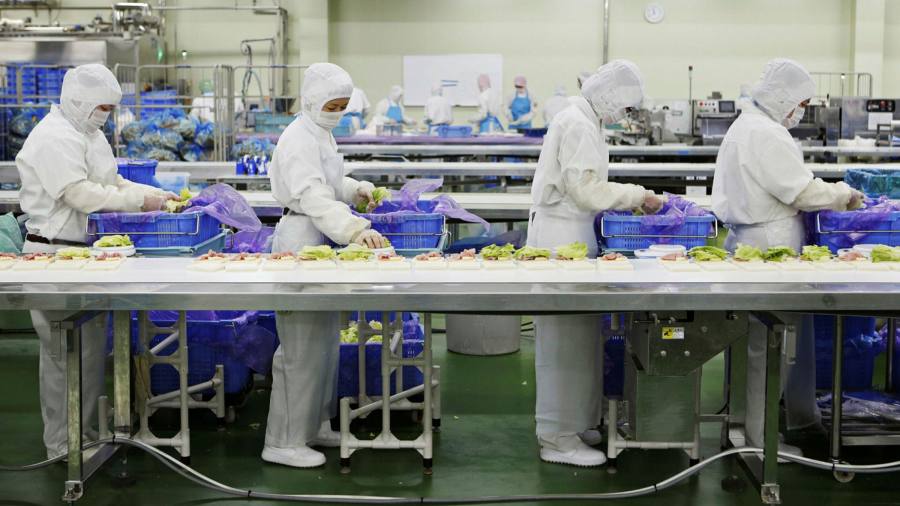 Sign up to myFT Daily Digest to be the first to know about Keyence Corp news.

Spotting which bottle has its lid screwed on properly is just the sort of tedious work that robots excel at. In Japan, a shrinking labour force has spurred investment in such manufacturing aides. Sensor maker Keyence is reaping the benefits.

Japan is home to the world’s fastest ageing population. Coupled with declining birth rates, the country is in the midst of a labour shortage made worse by the pandemic. Unemployment stood at 2.8 per cent in July. Labour shortages are especially pronounced in manufacturing.

The result is sharp growth in demand for Keyence’s specialist sensors and machines. One of its most popular products is a laser sensor able to detect tiny height and angle differences on products moving along inspection lines. This allows factories to operate with a smaller number of workers.

Fat operating margins of 53 per cent in the year to June reflect just how much companies are willing to pay for a solution to employee shortages. The company sends sales engineers to visit client factories regularly, setting up customised solutions. By contracting out its manufacturing and focusing resources on product planning, it is able to keep costs low.

Shares of Keyence are up 70 per cent in the past year, adding to gains over the past two decades. There is room for more. Keyence is one of the three stocks that Nikkei will add to the benchmark Nikkei 225 index on October 1. As passive funds rebalance their portfolios, there should be an increase in Keyence share purchases over the next few weeks.

Longer term, Keyence will need to prove it can find more countries as keen to buy its products as Japan, which accounts for about half of revenues. The stock trades at 66 times forward earnings — double that of local peers Omron and Fanuc. It is looking to expand overseas but ABB, Rockwell and Honeywell are formidable rivals. As it moves into new markets, Keyence’s premium valuation may become more difficult to retain.

If you are a subscriber and would like to receive alerts when Lex articles are published, just click the button ‘Add to myFT’, which appears at the top of this page above the headline