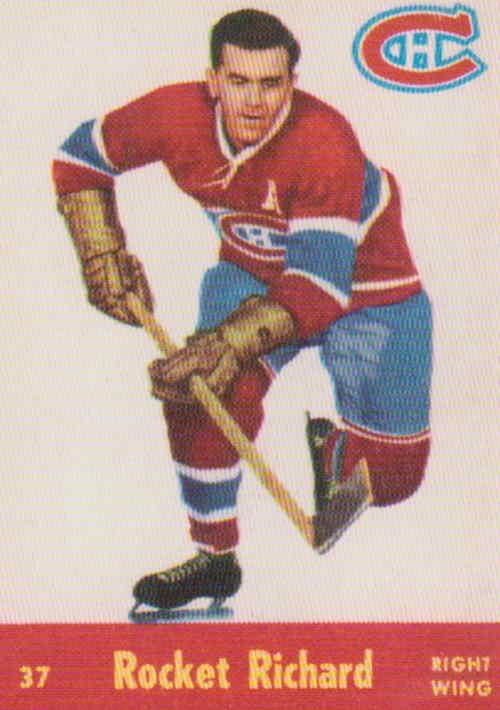 Rocket Richard, Montreal Canadiens superstar sniper was a goal-scoring nightmare for goalies especially for one NHL goaltender in particular.

In a recent interview Richard was asked if he was consciously trying to intimidate the goaltenders. He replied that he wasn’t. Instead, he was really trying to remember how he had scored his last goal because he didn’t to want to do the same thing twice in a row.

Maurice “Rocket” Richard was born in Montreal on August 4, 1921. As a child he learned to skate on a rink that his father, Onesime, built each winter behind their house. Before long, he was playing minor hockey and his prowess as goal scorer attracted the attention of many teams. In fact, some seasons, Richard played for as many as four or five teams at the same time!

He studied to become a machinist at the Montreal Technical School, but his real love was hockey. In 1939 he played for the Paquette junior team, scoring an amazing 133 goals, while the rest of the team combined for a meager total of 11 goals in the entire season! These scoring exploits led the Montreal Canadiens to sign him to play for their club in the Quebec Senior League. In his first game he scored two goals before the end of the second period. In the third, he broke his wrist and missed the rest of the season. The next season he fractured his wrist and missed most of the season.

Despite these injuries, Richard joined the Canadiens for the 1942-43 season. It was at his first training camp with the Canadiens that he was first given the nickname, “the Rocket”, by teammate, Ray Getliffe. He said that Richard’s scoring prowess was similar to that of a rocket, a weapon which was very much in the news during those World War 2 days.

In his first 16 games he notched 5 goals and 6 assists, but the injury-bug struck again. This time he fractured his ankle and missed the rest of the season. During the 1943-44 campaign Maurice was put on a line with Elmer Lach and Toe Blake. This marked the birth of one of the most feared lines in the history of the NHL, the “Punch Line”.

Led by the “Punch Line” and Richard’s 32 goals, Montreal surprised everyone in the NHL by finishing in first place. In the play-offs, Richard proved that he could score clutch goals. In nine games he scored 12 goals and the Canadiens won the Stanley Cup.

1944-45, Richard’s second full NHL campaign, proved to be an unforgettable moment in NHL history. He became the first player to score 50 goals in 50 games. Perhaps one game stands out above the rest that remarkable season. On December 28, 1944, Maurice asked the coach if he could miss the morning skate in order to move into a new home. It had been decided that he would not play that night against Detroit, but after he finished moving, Maurice told the coach that he wanted to play. The coach agreed and Richard scored 5 goals, assisted on 3 more, leading the Canadiens to a 9-1 thrashing of the Red Wings.

Maurice Richard’s scoring prowess and his ability to score “clutch” goals are well-documented. Throughout his career, he was always at, or near, the top of the NHL’s goal-scoring race. His competitive nature and fierce will to win made him a controversial player. His fans adored him and he became virtually an icon in his home province of Quebec. At the same time his rivals, and their fans, perhaps out of fear of his goal-scoring feats and fierce will to win, loathed him. But in the end all hockey fans admit that he was perhaps the greatest goal scorer in the history of the game!

Perhaps there is one moment in time which best illustrates Rocket Richard’s personality on the ice. On April 8, 1952, the Canadiens were playing the seventh game of the Stanley Cup semi-finals against the Boston Bruins. The score was tied at 1-1, when mid-way through the second period Richard was knocked unconscious by a vicious blow from a Bruin player. He lay motionless on the ice, with blood spurting from his head. Many in the arena thought he was dead. He was taken to the dressing room, where a doctor stitched his wound. Team officials tried to convince him that he was finished for the night and that he should take off his equipment. The indomitable Rocket Richard refused. He returned to the bench for the start of the third period. He was nauseated, his vision was blurred and he could hardly stand, let alone skate. The score remained 1-1 , when, late in the game Richard mustered himself up, and went onto the ice for a face-off. When the puck dropped the Rocket grabbed it and headed for the opposition net.

He beat the defense and probably using the last of his strength fired the winning goal past Sugar Jim Henry. The Rocket’s competitive spirit had carried the Canadiens into the Stanley Cup Finals!

Maurice “Rocket” Richard retired at the end of the 1960 season. His retirement years have been busy. Maurice is an avid fisherman and hunter. When he is not pursuing these activities the Rocket works as a goodwill ambassador for Molson’s. He is a popular attraction at sports memorabilia shows, as fans young, and old, line up for hours just to say they’ve met the greatest Montreal Canadien of all time! In 1998-99 the NHL inaugurated a new trophy to be presented to the top goal scorer during the regular season. Fittingly, this new award is called the Maurice Richard Trophy.

I have interviewed many athletes over the years, but finally meeting Rocket Richard is something that I will never forget. When I told him that I was from Owen Sound, he asked me if I had known Harry Lumley. When I said that I had, he responded, “I always liked Lumley, I scored more goals on him than any other goalie!” As he made that statement about an old foe, I noticed his eyes grow larger and more piercing. Some habits never go away!

Syl Apps: A Maple Leafs Icon whose smooth skating HHoF talents make him one of the greatest All-Time hockey players in the history of the NHL. Ironically, before he became a Maple Leaf one NHL general manager decided not to sign him to a contract solely because Apps had aspirations of becoming a minister!

Jean Beliveau, an outstanding hockey player, baseball player, a nice guy who in Quebec City was known as the “Ice Cream Man”.

Alex Faulkner: NHL Pioneer only played one game as a Toronto Maple Leaf, but to hockey fans in Newfoundland it was an important hockey game!

Forbes Kennedy suited up for 13 regular season games and one playoff game as a Toronto Maple Leaf. But a lot can happen in 14 hockey games!

Ted “Teeder” Kennedy a Leafs Legend was almost a member of the Montreal Canadiens but a homesick 16 year-old changed that by leaving Canadiens training camp for home.

Hockey history: Florida details the one-year life of the Tropical Hockey League that entertained fans in the south Florida region in the late 1930s.

Larry Jeffrey started his career as a Red Wing, won a Stanley Cup with Toronto, had a short stint as a Ranger and then retired to the beach in Goderich, Ontario!

Rocket Richard, Montreal Canadiens superstar sniper was a goal-scoring nightmare for goalies especially for one NHL goaltender in particular.

Paul Henderson: A Canadian Hockey Hero, “I scored six really good goals and the garbage goal is the one that everyone remembers.”

W.O.A.A. – Western Ontario Athletic Association was the idea of one man that grew to successfully promote sports in western Ontario.

Hockey history is full of surprises, amazing stories and athletes who never cease to surprise. It is more than just stories about the NHL, it is tales from the minor leagues, the bush leagues, and much more. And, it is not just a Canadian story.