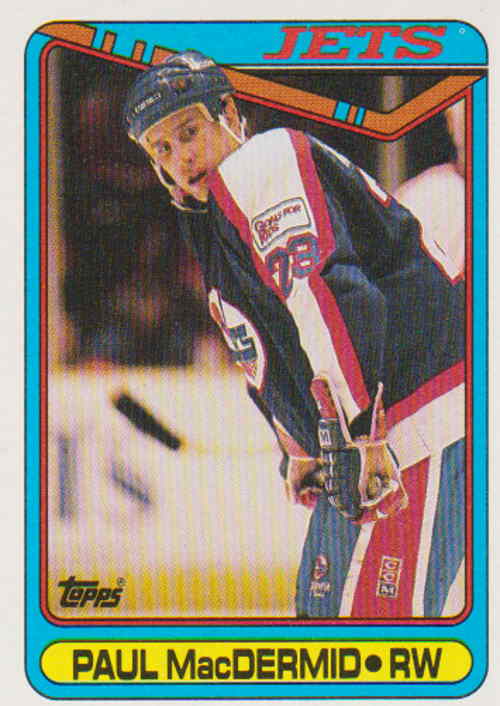 In 1968, a momentous occasion occurred in the Chesley minor hockey league.

A five-year-old lad skated onto the ice for the first time to play organized hockey. Little did anyone in attendance realize that they were witnessing the beginning of a career which would take this youngster to the arenas of the National Hockey League.

After his first Major Jr. A season, he was named the Spitfires most improved player. In the NHL draft that same spring, he was selected by the Hartford Whalers in the third round (61st overall).

Being selected by a National Hockey League team did not inspire complacency in MacDermid. He played another season with the Spitfires. During that season, he worked hard to further improve his hockey skills. At the end of the season, for the second year in a row, he was selected as Windsor’s most improved player.

Paul’s hard work in the 1981-82 season did not go unnoticed by the Whalers’ management. He was called up to play the last three games of the season there. During this brief stint, Paul scored his first NHL goal. This goal was special in many ways. Not only was it his first professional goal, but it was assisted by future Hall of Famer Dave Keon. This assist by the former Maple Leaf captain, who retired at the end of the season, was his last NHL point.

MacDermid started the 1982-83 season with the Windsor Spitfires, but was recalled to Hartford in December. After seven games, he injured his knee and returned to Windsor. Despite missing two months of the season, Paul was named to the OHL second all-star team.

The next season and a half were spent playing for Hartford’s American Hockey League franchise in Binghamton, New York. In February 1985, he was called up to the Hartford Whalers. For the next four-and-a- half seasons, he played for the Whalers. During this time, Paul experienced another memorable moment in his career. In the first game of the first playoff round of the 1985-86 campaign, he scored an overtime goal to defeat the hometown Quebec Nordiques.

During the 1987-88 season, Paul scored 20 goals and was the recipient of the “True Grit’ and “Unsung Hero” awards. During the 1989-90 season, he was traded to the Winnipeg Jets for Randy Cunneyworth. During the 1991-92 season, the boy from Chesley found himself playing in the capital city of the United States. He had been traded to the Washington Capitals for defenseman Mike Lalor.

A little more than a season later, Paul was on the move again. This time he found himself in the uniform of the Quebec Nordiques. He played there until he retired at the end of the 1994-95 season.

During his career, Paul MacDermid scored 116 goals and 142 assists, while amassing 1,303 penalty minutes. He was a solid two-way hockey player, whose determination and talent paid off in a career that spanned 12 years and 690 games in the National Hockey League.

Today, Paul is a member of an ownership group running the OHL Owen Sound Attack. Paul, and other community-minded citizens stepped to purchase the Owen Sound junior hockey franchise in 2000, when the previous owners decided to sell, and there was a very real chance that the team would be moving to Cornwall Ontario.