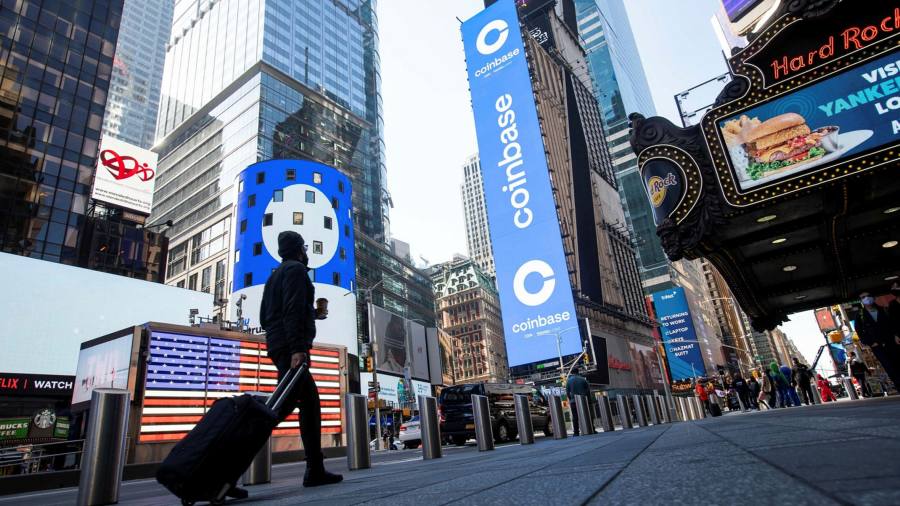 Coinbase is trying to bust through barriers again. After becoming the first major cryptocurrency exchange to secure a public listing, the US company is seeking to raise $1.5bn in long-dated debt in another watershed moment for the fledgling sector.

Prudence might dictate a softly, softly approach while passing around the hat to institutional investors. Instead Brian Armstrong, Coinbase’s chief executive, last week deliberately picked a fight with the US Securities and Exchange Commission.

Complaining about what he called “some really sketchy behaviour” by the watchdog, Armstrong let fly a 21-tweet broadside revealing that the SEC has threatened to sue Coinbase if it goes ahead with plans that let customers earn interest by allowing their digital assets to be loaned out.

The SEC contends the new product is a security, which would mean it needs to be registered with the watchdog and follow certain procedures. Coinbase disagrees: “How can lending be a security?” Armstrong tweeted. “Who are they protecting here and where is the harm?”

Coinbase is not the first big crypto group to push back against oversight: Binance had a public spat with BaFin over stock tokens that the German regulator contended were securities, and UK regulators say its British arm has failed to respond to basic queries about the wider group’s products and structures.

Indeed, Armstrong’s jaded view of watchdogs is widely shared among technology groups seeking to disrupt financial services. “All of these regulators want to protect their current system, which is mostly constituted of banks and large financial institutions,” says Alex Mashinsky, chief executive of Celsius Network, which offers crypto lending.

This insouciance toward rules has served the tech industry and its backers very well: Apple, Google and the like built fantastically profitable businesses that way. But regulators and society at large are growing less tolerant of the “move fast and break things” approach, as Facebook used to put it. The hubris is particularly galling in sectors where poor product design can have deadly consequences. Tesla is discovering this when it comes to self-driving cars as the regulatory probes mount up. And Amazon should keep it in mind as it presses into healthcare.

Her lawyers counter that “she genuinely deeply believed it would be successful” and “failure is not a crime.” Tell that to the patients who received misleading results from Theranos’s faulty technology. Jurors considering wire fraud charges will be hearing testimony from them soon.

Financial services has long been a bit of a halfway house, with certain activities tightly regulated, such as deposit-taking and issuing securities, and more freedom in other areas. Not surprisingly, the Coinbase fight is about policing the boundary between them. Armstrong argues that it is unfair for the SEC to threaten a lawsuit before it issues guidance on digital asset lending programmes. “Regulation by litigation should be the last resort for the SEC, not the first,” he complained.

‘“As if”, thousands of bankers might reply. The SEC and other watchdogs have being using enforcement cases to set industry standards for decades. Subjects as wide-ranging as equity analyst conflicts, Libor manipulation and deceptive dark pools were all tackled through litigation as a first resort.

“The ‘message case’ approach is quite handy — the SEC can act quickly and avoid having to really figure out what the precise contours of regulation should be,” explains Henry Hu, a University of Texas professor and a former SEC division head.

This whack-a-mole approach inflicts quite a bit of pain on the target, but having to wait for regulators to spell out the rules would be far worse. The SEC policy process is brutally slow: it still hasn’t finished writing some of the rules Congress asked for after the 2008 financial crisis. And crypto bros should know this: American regulators are still dithering over whether to allow crypto-based exchange traded funds, even though more than two dozen applications are pending and assets in non-US funds had tripled in the six months to June to $9bn.

Coinbase and the like are mistaken if they think they can bulldoze the protective barriers that slow innovation. Confrontation will only strengthen the resistance.