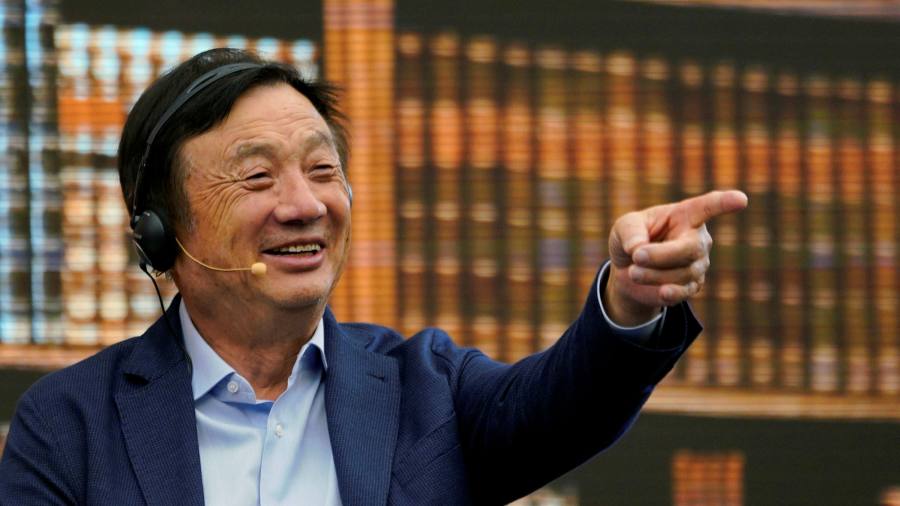 Sign up to myFT Daily Digest to be the first to know about Technology news.

Hello, Kenji here in Hong Kong. This week we are loaded with exclusive stories. The Big Story is Huawei founder and chief executive Ren Zhengfei’s words on his ambition to lead the next generation 6G telecom technology. In Mercedes’ top 10 list, the Nikkei Asia Taipei team has another scoop on Foxconn’s EV joint venture with its Chinese partner Byton hitting a snag. The FT uncovered a new app being used by the Chinese police to identify those viewing overseas financial news sites. While China seems to dominate the Asian tech scene, I’m wondering whether Japan could make up some ground in the global chip rivalry (Smart data). See you next week!

China’s Huawei aims to dominate patents for 6G telecoms. The tech giant, which already holds the largest number of patents for 5G telecoms, is redoubling its efforts in spite of US sanctions aimed at hobbling its business, according to this exclusive in Nikkei Asia.

Huawei founder and chief executive Ren Zhengfei told an internal gathering that the company will continue developing its 5G and artificial intelligence businesses while also working to secure its lead in next-generation technology.

Key developments: “Our research into 6G is preparation against a rainy day, and we aim to seize the ground of 6G patents,” Ren said. “We must not wait until 6G becomes viable, as waiting would impose constraints on us due to a lack of patents.”

5G telecoms, being rolled out around the world, offer faster, low-latency data transfer and have implications for everything from self-driving cars to livestreaming. 6G, though still in its infancy, promises more futuristic applications, including in the fields of space research and earth sciences.

Ren’s rallying cry throws down the gauntlet to the US and Japan, which are both pouring money into 6G development, including for its use in satellite technologies — one of America’s strong suits. Both Japan and the US lag behind China in terms of 5G development and deployment.

Upshot: Huawei reported its largest-ever decline in revenue in the first half of this year, mainly due to the impact that US sanctions had on its smartphone business. The 6G plan shows an aspect of how the company aims to survive. It is also pouring money into semiconductor development, with investments in more than 20 chip-related companies.

Just about a month ago, China Telecom’s listing in Shanghai was greeted with great fanfare in the country. Even though going public in its home market followed a forced delisting from New York, any negative connotations like “retreat” or “being shoved out” were avoided in the official narrative. It was depicted as a “return” that allowed local investors to share in the profits of growth.

Hence, the stock performance had to be positive too. But it turned out to be another painful lesson for Beijing on how market prices are not controllable. After a 35 per cent rise to Rmb6.11 (95 cents) on debut in August, the price of the Shanghai-listed shares began to collapse from the following trading day.

All the gains made on day one were washed away and the share price is now back to the original initial public offering price of Rmb4.53. Whereas on debut China Telecom became the ninth-largest listed company by market capitalisation in Shanghai, by the next day it had fallen out of the top 10. During the same period, the benchmark Shanghai Composite index rose by 7 per cent.

It is hard to know what goes on behind the bamboo curtain. But the obvious window dressing of China Telecom on debut would have sucked in some investors at levels even as high as Rmb6.52. They will now have suffered losses. So while the operation to engineer a splash debut for China Telecom may have saved some faces at the top, it ended up by reinforcing the sense of distrust that lingers over state-backed listings. This could also affect upcoming Shanghai IPOs like that of China Mobile, which was also forced to delist in the US.

Japan’s chip industry is being hollowed out. According to market research company IC Insights, Japan had the most chip plant closures of any country or region between 2009 and 2019, followed closely by the US. Japan’s global share of the market has slid to 10 per cent.

Now a flurry of activity overseas threatens what is left of Japan’s share. Government policy in South Korea and China is aimed at expanding domestic chipmaking, and the US and Europe — alarmed by this year’s chip shortage and possible geopolitical risks over Taiwan — are trying to revive their own industries. Read more about Japan’s chip sector finding itself at a crossroads here.

Lenovo boss Yang Yuanqing made his name selling personal computers. But now, he says, it is time to pivot. And he is getting ready a $8.7bn war chest to help put his new vision into action.

Yang, a protégé of Lenovo founder Liu Chuanzhi, has always been ambitious. He benefited from Liu’s acquisition of US industry pioneer IBM’s PC business in 2004 and then went on to build the Chinese company from the third-largest maker in the world to the industry leader.

Now, though, it is time for something new. Yang wants Lenovo to become an “everything as a service” company and he plans to invest heavily to bring this goal to fruition. A significant part of the plan will be using artificial intelligence — partly through a platform called Lenovo Brain — to get the most out of manufacturing machinery, healthcare services and educational applications.

“We are committed to doubling investment over the next three years to fuel our ‘Smarter Technology for All’ vision,” Yang said.