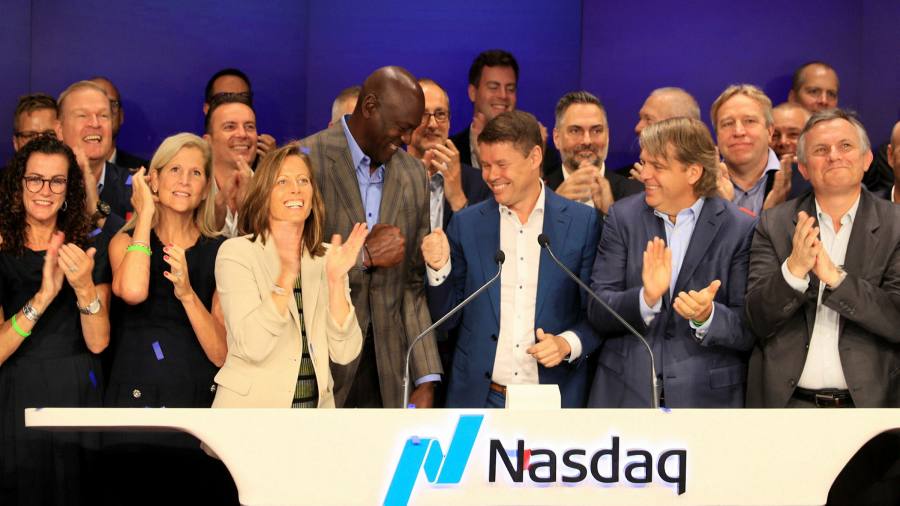 Sign up to myFT Daily Digest to be the first to know about Gambling industry news.

The legalisation of US sports betting is driving new demand for statistics on players, games, teams and performance. A pair of sports data companies have installed themselves as the gatekeepers to this information trove.

Sportradar Group and Genius Sports license data from hundreds of professional sports competitions including the National Football League, Major League Baseball, the English Premier League and the PGA Tour. They package and sell it to betting platforms and media companies, which in turn use it to offer wagers or create graphics and scoreboards on broadcasts.

Both companies have tried to capitalise on the growing financial stakes tied to sports data. While versions of each have been around since the turn of the century, business has accelerated since the US Supreme Court struck down a federal ban on sports wagering in 2018.

Swiss-based Sportradar listed on the Nasdaq stock market on Tuesday with a market capitalisation of $28bn. London-based Genius went public through a reverse-listing with a special purpose acquisition company in April, and is now valued at $3.8bn.

Americans placed more than $27bn in sports bets in the first seven months of this year, according to the American Gaming Association, generating tax revenues to US states of more than $2bn. In July the tax revenues were six times higher than in July 2019.

Data has become an increasingly valuable commodity in all types of financial risk taking, from sports betting to stock trading. Financial exchange groups now view the data generated through buying and selling as an important source of revenue.

Both Sportradar and Genius have negotiated new deals to license statistics from top leagues. While they dominate the sports data industry, they have little bargaining power with their suppliers, analysts said. Genius wrested exclusive data rights for the NFL, the most popular US sport, from Sportradar in April, paying a reported $120m a year.

In an interview this week, Sportradar founder and chief executive Carsten Koerl said his group would not get into bidding wars over data.

“If a deal makes commercially no sense for us or is commercially on a level that we think we cannot do it, we can’t close every deal”, he said.

A spokesman for Genius said its role as a gatekeeper of league data helped to preserve the integrity of legal sports betting.

“Our official data strategy ensures that sports control the capture and distribution of their proprietary data to deliver the most engaging and competitive products available for sports fans across the betting and media. With official data, everyone wins,” he said.

Sportradar has used data licensed from leagues to invent its own products, such as “integrity services” to ensure matches are not fixed or tampered with, according to a description of the service in a regulatory filing.

“The data is one piece of it,” Koerl said. “We are making value-add services on top of the data, which is very important for us. We are creating probabilities, we are creating trading services, management services, platforms [and] advertising products.”

Jed Kelly, senior equities analyst for Oppenheimer, said part of what investors saw in Genius and Sportradar was their ability to feed real-time data to betting platforms and media companies while games were under way. “Where you make your money is live betting,” he said.

So far, the sector has drawn interest from some of the top names in sport. Sportradar’s minority investors include Dallas Mavericks owner Mark Cuban and basketball legend Michael Jordan, who was on hand on Tuesday to ring the Nasdaq opening bell with Koerl.

Scoreboard is the Financial Times’ new must-read weekly briefing on the business of sport, where you’ll find the best analysis of financial issues affecting clubs, franchises, owners, investors and media groups across the global industry. Sign up here.

Koerl takes pains to convey an air of neutrality within the hyper-passionate world of sports fandom. Shuttling between investor meetings in Manhattan this week, he said he found himself discussing the topic of the greatest basketball player of all time with his taxi driver.

The Germany-born entrepreneur mentioned his affiliation with Jordan, while the driver insisted that Los Angeles Lakers star LeBron James was better, calling him a more complete player.

Koerl said he preferred to entrust qualitative sports judgments to his associates. “I think the [NBA] commissioner knows it even better and if a commissioner is saying he’s the best player in a sport, I would follow his opinion,” he said.

Wall Street’s initial judgment of his company was less than enthusiastic: on Tuesday Sportradar’s shares fell 7 per cent.