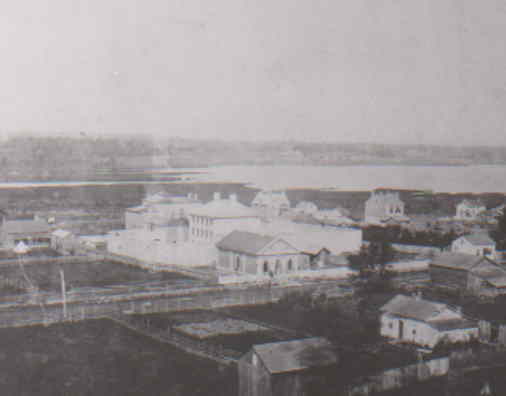 Grey County’s Creation in 1852, laid the framework for organizing a county in the last wilderness in the southern region of what would become in the future the province of Ontario.

On April 15, 1852, a historic meeting was held in the home of James Coleman in the Town of Sydenham (Owen Sound). On that occasion the Provisional Council of Grey County held its inaugural meeting.

The formation of the new county brought together municipalities which had formerly been part of neighbouring counties. St. Vincent, Euphrasia, Artemesia and Proton had been attached to Simcoe County. While the townships to west had been joined with Wellington County in Waterloo District.

While the meeting of the Provisional Council in the spring of 1852 marked Grey County’s creation, it was not totally independent. The new County of Grey would remain a part Wellington County until it had erected its own Court House and County Jail.

Those in attendance at this first meeting were Messrs. Lunn, Jackson, McNabb, Carney, Grey, Allen, Smith, Robertson, Beachell, Jones and Pringle. Mr. John George Grange chaired the session until a Provisional Warden could be elected. The honour of holding the title of first Warden of the new County of Grey went to James Beachell. James Gale was elected as the Provisional Clerk and Thomas Gordon was selected to the position of Provisional Treasurer. John Mills was appointed to the position of messenger and doorkeeper.

This first Council was charged with the responsibility of laying the groundwork for the new County. The Standing Rules of the Council of the County of Waterloo were adopted as the rules for the Provisional Council. The next item of business was to find a permanent location for the Court and Jail. Three citizens of the town of Sydenham, Donald McDonald, John Frost, and John Mills offered land for the erection of a Courthouse and Jail.

When the meeting adjourned, a committee of Councillors, set out to inspect the land sites. Several prominent citizens from Sydenham, John Frost, A.M. Stephens, F. Lepan, W.C. Boyd and R. Patterson, accompanied the committee on this tour. When the council met the next morning, the committee reported that the sites were not acceptable.

The Committee conducted a further study to find land for the Courthouse and Jail and at the August 23, 1852 Council meeting it was proposed that the County buildings be constructed on what is now Victoria Park, but was then known as the Pleasure Grounds.

The Pleasure Grounds were owned by the Crown and it was felt that they served a more important use to community as a place for recreation. Consequently, the Council was forced to renew its search. The Government offered the County free land on Princess and Cathcart Street, but the Committee felt that this property did not suit its needs.

On November 1, 1852 a contract was signed with Messrs. Dowling and Dougal to erect the building for the sum of 3,030 pounds cash, or 3,735 pounds if debentures were issued. Mr. Bruce of Guelph, whose design had been accepted was hired to act as the construction supervisor. The Provisional Council had taken the first step to enable Grey County to become an independent political entity.

The information used in this article came from many sources, including A History of the County of Grey and various issues of the Owen Sound Sun Times.

12-year-old Walks to Owen Sound in 1851 from the journal of a teenage boy’s experience travelling with his brother in the untamed Upper Canadian wilderness.

1st Grey County Building in 1852 was only built after many hurdles were overcame.

Dr. Anna Henry  from Markdale, was a medical trailblazer for women doctors in Canada, who helped lay the groundwork for the establishment for Women’s College Hospital.

Egremont Township endured the usual growing pains of a pioneer community, but its early history records times when it was embroiled in a few contentious issues.

Euphrasia Township in the early years when spelling the name was a problem for those who called it home and those that wanted settle this new Grey County township.

Georgian Bay’s 1st pioneer settler arrived on the western shoreline long before any other settler reached the area.

Grey County Heritage: A Valuable Resource which is rich and varied, as an important resource for future use for business, political, and many other purposes.

Grey County’s Creation in 1852, laid the framework for organizing a county in the last wilderness in the southern region of what would become in the future the province of Ontario.

An Unlikely Hero From Grey County (Part 1) found his way from the farming community of Flesherton to missionary work in the Ottawa Valley, and beyond.

An Unlikely Hero Vs. The KKK (Part 2) Our hero from Grey County took his missionary zeal south of the border and ultimately crossed paths with the infamous KKK!

Barn Raising: A Pioneer Economic and Social Necessity as it provided settlers with an opportunity not only to build a barn, but also build a community.

“Barring Out”: A Pioneer School Tradition was a custom which the settlers brought to the new world from England, or Scotland.

Ceylon Ontario: How it Got its Name: It is always interesting how a community got its name, but I doubt any place received its name from a more unique source!

Chatsworth Ontario: First Settlers took advantage of fulfilling the needs of pioneer travellers and built a thriving community in the Upper Canadian wilderness.

Clearing Trees a Daunting Task for Settlers as they worked to fulfill their obligations for their land grant.

Dornoch: or is it Smithville? Originally it was Smithville, then it became Dornoch. But, surprise it is still, in reality Smithville!

First Pioneer in Durham: Archibald Hunter established his family, and a hotel, in what would become the centre of the town of Durham.

Durham Ontario Influenced by the Saugeen River. This river provided a means to create new industries, but especially in the spring it can also pose a menace to the community.

Grey County Bylaws to the 1890s reveal a lot about the financing of local government, especially education in the early days of the region.

John Muir, the legendary naturalist, who promoted the idea of protected nature spaces, spent time in Ontario and I went to help find evidence of his stay in the Owen Sound area.

A Heroic Woman From Grey County who made great changes as a doctor in China in the 1890s and early 1900s.

Jesse James: In Grey County? An interesting question. Did the notorious gangster hide out in Proton Township? We will never know. But it is fun to speculate!

Kilsyth’s Train Engine was one for the history books. It brought an evening of joy followed by disappointing news soon after.

The Knight’s of Meaford have long history in that Grey County community. Their business forged by early settlers employed many locals and supported the economy.

Leith: Tom Thomson’s Birthplace is part of the rich heritage of this community located on the east shore of the Georgian Bay north of Owen Sound.

The Leith Golf Course has provided many families with great memories. The history of this golf course starts, and ends, with the generosity of one family.

Agnes Macphail was a political trailblazer in a part of Ontario that one could hardly expect such radical action for the era in a rural region.

Markdale Ontario: The Beginning: originally known as Glenelg East, but the coming of the railway and the name of owner of the land for the station led to a change of identity.

Meaford’s history is one of hardy and entrepreneurial pioneers carving their lives out of the wilderness of what would become Grey County.

Meaford vs Purdytown. Conflict over the name of a new community was not unusual in early Grey County but electing a school trustee was the “hot button” issue in this rivalry.

Pioneer Clergyman: John Neelands was the first to minister to the first settlers’ spiritual needs riding on horseback through the wilds of early Grey County.

Pioneer Doctor: Dr. James Smith, a local boy who became a doctor and served his community for his entire life was a testament to Grey County community spirit.

Pioneer Healthcare in Grey and Bruce counties was not administered by doctors, nurses, or pharmacists, no it was the responsibility of the women of the community.

Pioneer Homes in Grey County in the 1840s offered only basic amenities. Homes were basic because clearing the land to earn a living to survive were of paramount importance for those embarking on a new life.

Pioneer Ingenuity created many labour saving devices and methods and quite often helped to create a sense of community.

Pioneer Christmas: A Family Tradition as told to me by may grandparents who experienced Christmas as children in the 1880s and 1890s.

Pioneer Settlement Plans for Grey County began almost two decades before the rest of Grey County was available for settlement.

A pioneer road surveyor’s impact on the local history of Grey and Bruce counties could have been dramatic, if it had not been changed by another surveyor.

Pioneer Teachers in Grey and Bruce Counties had a long and arduous task, not to mentions strict and confining job requirements for very little salary.

Plowing Match in Grey County in 1933 the first International Plowing Match held in Grey and Bruce counties and it’s success led to more such events in Grey.

Settling Osprey Township: Parts of Osprey were considered too rugged to settle, but today they are prime real estate because of the great view!

Swamp College: Proton Township: this colourfully named institution of education in Grey County has provided many stories to the heritage of the region.

The Impact of Snow is not what is Used to be! As snow removal equipment has improved the impact of snow on our lives has reduced significantly from previous eras.

Unique Characters: Nathaniel Herriman lived in Grey County and owned an inn to provide food and and accommodation to early travellers. Each day he performed a unique practice.

Unique Maps: Quilts Guided the Underground Railroad to enable runaway slaves to escape to Canada and freedom from the shackles that enslaved them.

The Women’s Institute is a group of rural women that has made a difference to the quality of both urban and rural life in Grey County and across the country.