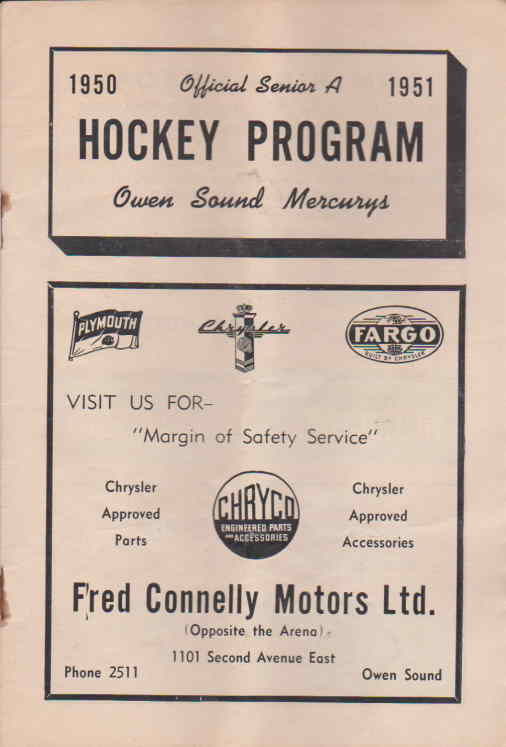 The 1950s began with Canada involved in yet another war. Society was undergoing dramatic changes. But one constant remained, this area was still a hockey hotbed and in the first hockey season of that decade another national hockey title came home to the Grey and Bruce region.

The Mercurys entered the playoffs hopeful of a long post-season run. Stouffville offered little opposition for the Owen Sounders in the first round, bowing out after five games. In the second round, the Peterborough Petes were the victims in four games to goalie Bob Gilson, and the rest of the Mercurys.

Gilson provided the all-star goaltending necessary for a hockey team to win a championship. But he was not alone in guarding the Owen Sound end of the ice. The Mercurys defense consisted of four veteran defensemen, who made any opposing player “pay the price” if they ventured into the Mercs’ end of the rink. Harry Kazarian, Art Hayward, Bun White and Bill Allum were as good as any defense core in the country.

On the forward line there was a good mixture of veterans and youngsters.

The Mercurys defeated the Sarnia Sailors to capture the Ontario title. Next the Mercurys travelled to Sault Ste. Marie. The Greyhounds won both games on their home ice and were so confident of victory that they didn’t bother to bring a change of clothes when they travelled to Owen Sound for what they figured would only be one game.

But, the results would be different when the teams came to Owen Sound. In this hockey hotbed of Senior hockey fans, Bobby Gilson and the rest of the Mercurys were not about to disappoint their fans by accommodating the wishes of the over- confident Greyhounds. Led by the veteran netminder, a determined defense, and the well-balanced forward lines of the Mercurys, the Owen Sound team roared back, to win all three home games and capture the series.

In the Eastern Canadian finals, the Mercury faced the Dolbeau Castors of the Lac St. Jean area of Quebec. They captured that title by a margin of 3 games to 1.

The Canadian finals were between Owen Sound and Fort Frances Canadians. After a hard fought six games, the two teams were tied at three games each.

Late in the game Fort Francis staged a terrific attempt to comeback, but Gilson was equal to the task stopping all but one shot.

On May 9, 1951 the Owen Sound Mercurys claimed their first Allan Cup. The powerhouse hockey club remained at, or near the top of the senior hockey league for several more years.

A version of “Owen Sound: A Hockey Hotbed in 1950-51,” originally appeared in my Local History column in the November 12, 1999 edition of the Owen Sound Sun Times.