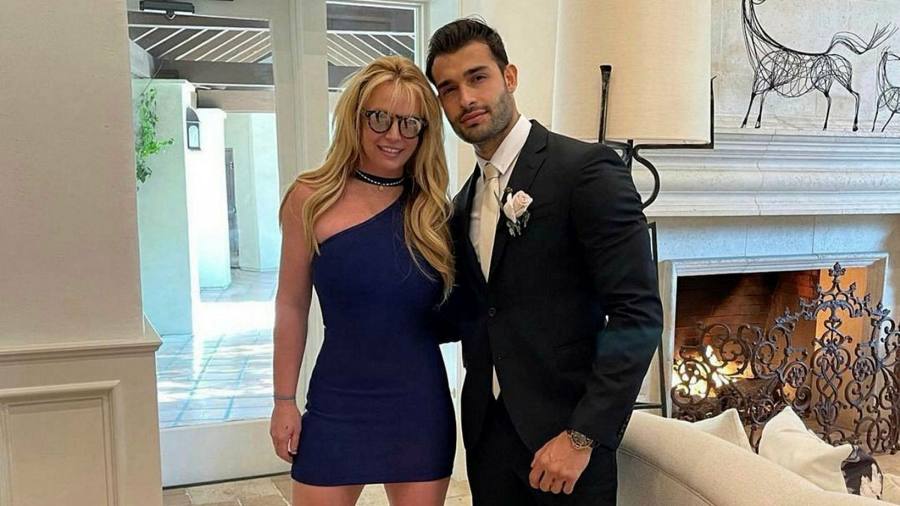 Oouuuff Britney. Within days of news that her father Jamie had filed papers in a Los Angeles court to end the 13-year conservatorship that has seen him and a group of lawyers overseeing her life and finances, Britney Spears was announcing her engagement to Sam Asghari, an actor and personal trainer she first met in 2016. The couple have subsequently been described as hunting for a lawyer who can oversee their pre-nup, and Spears has deactivated her Instagram account in order “to take a break”.

For many years Britney-watchers have regarded her Instagram as a portal through which they believe the singer communicates secret messages about her condition: recently, that portal has offered a glut of frenzied dancing videos, Hallmark-card homilies and bathroom selfies that find her semi-nude. As a part-time Britney conspiracist myself when it comes to the conservatorship, something about the whole thing doesn’t feel quite right.

After 13 years, Spears is slowly shaking off a near enslavement to legal guardians who have controlled the entirety of her estimated $60m fortune, her social and professional engagements and, it transpired when she appeared in court this summer, her reproductive health. It seems extraordinary that instead of gulping the rush of oxygen that should come with her potential freedoms, Spears has marked the moment by rushing to a lawyer with another bit of paper that may bind her to another man instead. Having endured two messy, legally fraught marriages already, wouldn’t it make sense for Spears to enjoy a few more dates instead?

Am I the only person who found it depressing to see Billie Eilish dressed in homage to Marilyn Monroe?

As a modern allegory for the perils of female celebrity, Britney is this generation’s poster child. Like Marilyn Monroe or Elizabeth Taylor, Spears’ very public journey from sweet naïf to bedevilled pop star spans a whole era in modern show business in which her experiences have been repackaged as a cautionary tale. Emerging in the strange twilight before the smartphone or social media, but when stories were already going viral online, Spears was one of the casualties of the paparazzi frenzy for star content at a time when the media could run unchecked. There were no opportunities to redress the narrative on social media, and there were no smartphones with which to capture the daily horrors young vulnerable females faced. Looking back at footage from when Spears’ career was stratospheric, it’s shocking to see the persecution she faced in her daily life: social media might be dangerous and addictive, but when used to highlight inhumane treatment, it has at least held some behaviours to account.

Britney has become the embodiment of a toxic industry that sexually commodifies and exploits young women, but we like to think we’ve moved on since she emerged. Look at the reckoning in Hollywood following the disgrace of Harvey Weinstein. Hear the echo of the social justice campaigners that still reverberates around #metoo. The new documentary Look Away, about sexual exploitation in the music industry throughout the Seventies and Eighties, describes a world in which paedophilia is eulogised in classic rock songs and where sexual licentiousness is so ingrained within the culture that no one thinks to raise an eyebrow when Steve Tyler sleeps with a 16-year-old, and then makes her his “legal ward”. That wouldn’t happen nowadays, we tell ourselves. And then I watch footage from the Met Gala, one of the world’s most public celebrity get-togethers, and wonder whether things have really changed much after all.

Yes, the language has shifted. But even for all body positivity and exhortations of personal freedoms, the conversation still revolves around a woman’s body and her sexual currency. Witness Jennifer Lopez, for example, the 52-year-old “qween” with the pneumatic body who has captivated the internet this summer with her rekindled romance with Ben Affleck, the actor she first dated nearly 20 years ago. “Watch them kissing through their masks!” And am I the only person who found it a bit depressing to see the wonderful Billie Eilish, for so long the anti-heroine of pop princess-ery and overt sexualisation emerging from the chrysalis of surly teenage-hood to host the Met Gala dressed in homage to Marilyn Monroe, platinum haired and swathed in fairy tulles. Some women used their bodies as walking billboards — most notably Alexandria Ocasio-Cortez, who subverted the public gaze by wearing a body-fitting gown with “Tax the Rich” scrawled across her ass. Most others wore next to nothing. Whatever the prevailing politics and agendas, the men still wore suits and sneakers, and the women got their tatas out.

“Peg the patriarchy”, read a bodice worn by model Cara Delevingne. But the more interesting statement came from Kim Kardashian. The reality star and lingerie entrepreneur appeared at the Met Gala wrapped from head to toe in black. Was it a comment on women’s freedoms as they are currently being curtailed, from Texas to Afghanistan? Was it a rejection of the inner self? Kardashian has built a career on the possession of impossible vital statistics, and a body image partly designed by her husband Kanye West, from whom she has now filed for divorce. Was this look her own expression of some kind of emancipation? Or the final acknowledgment of her subjugation to the body — her silhouette now so iconic it has now become a personality in itself.