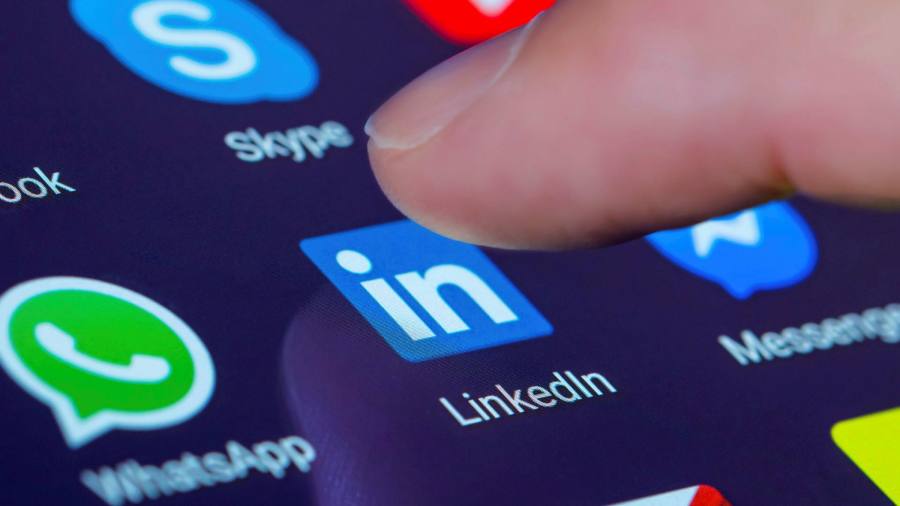 Sign up to myFT Daily Digest to be the first to know about Social Media news.

It is so easy to make fun of LinkedIn. The professional network is 18 years old — Methuselah by social media standards. Its insistence on adding Instagram-style features can seem cringeworthy. Why would anyone want to put disappearing photos on their LinkedIn page? Who wants to become a LinkedIn influencer anyway?

Undeterred, the company is plotting even more bells and whistles. Last week it announced a $25m “creator fund” to encourage users to post more content. TikTok-like short videos are on their way. Soon it will launch its own version of Clubhouse, the audio chatroom app that sent Silicon Valley into a tailspin last year.

Stifle your sniggering. The most peculiar thing about these efforts is that they seem to be working. In the past three years, LinkedIn has added about 200m new users. Its annual revenues have nearly doubled to $10bn. This is Facebook-level growth. Not bad for the world’s nerdiest social network.

Perhaps being dorky explains some of LinkedIn’s success. The good thing about a low-key reputation is the ability to hang on to trust squandered by other social media companies. One of my friends was asked by a potential date if they could connect via LinkedIn before meeting so she could check he was who he said he was. Her rationale was that nobody fakes a LinkedIn profile.

While the world frets about the destructive impact of social media, LinkedIn has been able to amass three quarters of a billion users without pushback. In the course of writing this column I realised that I now have more LinkedIn contacts than I have friends on Facebook, followers on Instagram or numbers saved in my phone.

What is less obvious is how valuable those connections are. It is easy to click ‘yes’ on an email asking to join your LinkedIn community. But if my contacts were gathered in a room I would have no idea who many of them were. They would probably say the same about me. LinkedIn may be the world’s biggest platform targeted at professionals but it lacks the addictive quality that keeps people refreshing their Instagram feed or scrolling through TikTok.

When Microsoft bought LinkedIn in 2016 for $26bn it was seen as a mad amount of money to spend on an unprofitable jobs site. There was speculation that Microsoft was really after LinkedIn’s amiable founder, Reid Hoffman. Hoffman is a member of the PayPal Mafia, the group of ex-PayPal executives that includes Elon Musk and Peter Thiel. He is well connected and well liked. Microsoft, on a mission to transform its business, needed his help.

While Hoffman joined the board of Microsoft, LinkedIn was left to its own devices. Based in a rather glamorous office in downtown San Francisco, it makes its money selling adverts, recruitment services and premium memberships. I mostly use it to check people’s job titles.

Can audio chat rooms and TikTok-style short videos make us all spend more time on the site? Perhaps. LinkedIn says public conversations between users are already up more than a third in the past year. That sort of engagement is popular with advertisers. LinkedIn made $1bn in advertising revenue in the past quarter — nearly double the previous year — though it is cagey about profits.

Microsoft boss Satya Nadella is clearly intrigued by content creation and online communities. Hence Microsoft’s attempt to buy the US TikTok business and its interest in Pinterest and the chat app Discord.

To make LinkedIn more compelling the content has to be more interesting than congratulating your workmate on their one-year job anniversary. There are a lot of Tony Robbins wannabes offering up humblebrags and “hard work pays off” platitudes. The company’s challenge is to encourage people with valuable knowledge to share it. There is an appetite for this. The appeal of Clubhouse was not just the audio but that the conversations often consisted of professionals offering insight about their industries. These sorts of connections are underserved by other social media.

If it succeeds, expect rivals immediately to offer copycat versions. Facebook has already encroached on LinkedIn’s territory by encouraging users to look for jobs on its platform. This summer, TikTok launched a pilot scheme called TikTok Resumes. Users in the US were encouraged to find their “dream job” by uploading a video CV.

LinkedIn has a good head start. If it keeps racking up sales it will prove itself a valuable purchase for Microsoft. Consider that Facebook has a trillion dollar market value — more than 11 times its annual revenue. If LinkedIn was valued in the same way it would be worth at least $100bn. Perhaps it wasn’t so expensive after all.