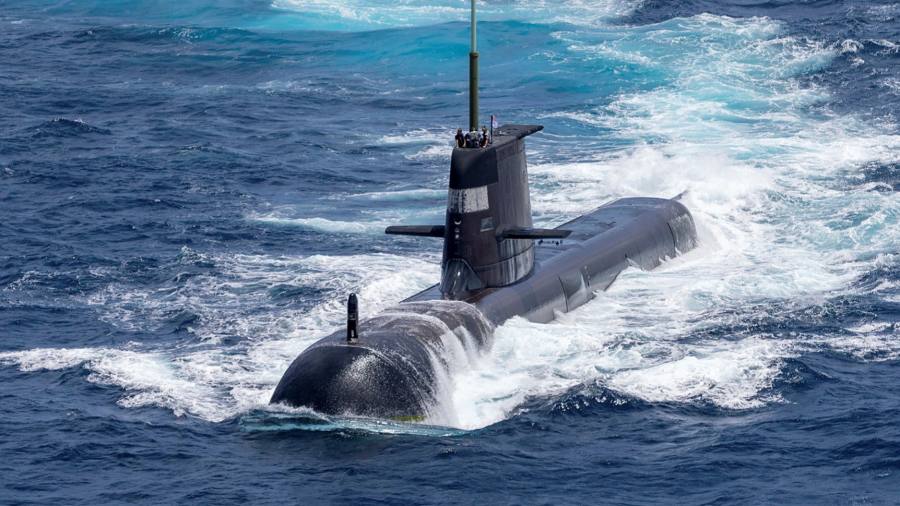 Australia’s prime minister Scott Morrison defended his decision to renege on a submarine deal with the French government as acrimony continued over Canberra’s decision to sign a new security pact with the US and UK.

Morrison said he did “not regret the decision to put Australia’s national interest first” in comments that came just hours after France, which is fuming over being left out of the pact, derided the UK’s role.

But in a sign that Washington is keen to de-escalate the worsening crisis, US president Joe Biden has asked for a call with President Emmanuel Macron of France to discuss the submarine deal.

“President Biden very much values our alliance with France and looks forward to speaking with President Macron and finding a way forward,” a White House official said on Sunday.

British officials insisted that Boris Johnson, who will meet Biden in Washington this week, had not wanted to “annoy the French” in signing the Australia/UK/US defence pact known as Aukus.

However, the anger in Paris was still raw, with Jean-Yves Le Drian ridiculing Britain’s role in the pact and accusing the UK of “permanent opportunism”.

Le Drian said it had not been necessary for France to recall its ambassador from London on Friday — as it had done with its envoys to Canberra and Washington — because Britain was “a bit like the fifth wheel on the coach”.

But Johnson sought to temper the diplomatic row, telling his French counterpart President Macron that the UK’s “love for France is ineradicable”.

Responding to Le Drian’s remarks as he travelled to New York on Sunday, Johnson insisted the Aukus alliance was “not meant to be exclusionary” nor something France “needs to worry about”.

“We work with France shoulder to shoulder in the Baltic states — in the biggest current Nato deployment. British troops, French troops side by side; there are no two sets of armed forces that are more capable of integration together and working side by side.

“Our love of France is ineradicable and what I would say is this Aukus is not in any way meant to be zero sum, it is not meant to be exclusionary, it is not something I don’t think anyone needs to worry about and particularly not our French friends.”

Australia said on Wednesday that it had cancelled a A$50bn (US$36bn) Franco-Australian deal for 12 conventional submarines that had been five years in the making and would instead develop at least eight nuclear-powered submarines with the US and UK in a trilateral deal that excluded France.

The Aukus pact — designed to confront growing Chinese power in the Indo-Pacific — prompted fury in Paris, where a French diplomat said the government was only informed of it on Wednesday morning despite attempts to glean information from US officials in previous days.

Morrison denied that he had been dishonest with the French government in the run-up to the signing of the latest deal, saying he had raised concerns about the submarine programme “some months ago”.

“They would have had every reason to know that we have deep and grave concerns that the capability being delivered by the Attack-class submarine was not going to meet our strategic interests,” he said at a press conference on Sunday. “We had made very clear that we would be making a decision based on our strategic national interest.”

On Johnson’s post-Brexit “Global Britain” ambitions, Clément Beaune, France’s Europe minister, told a state television station: “As you can see, it is a return to the American fold and accepting a form of vassal status.”

Liz Truss, Britain’s new foreign secretary, wrote in the Sunday Telegraph that the Aukus pact showed Britain’s willingness “to be hard-headed in defending our interests and challenging unfair practices and malign acts”.

The article did not mention either France or China, but Johnson’s foreign policy is about to be tested as he prepares to meet Biden at the White House next week.

British officials insist the Aukus pact was driven by security issues and that the UK was “fundamental” to the whole plan, but it was not intended as a snub to Paris. “We didn’t want to annoy the French,” said one.

Tensions with Macron are already running high after Brexit — particularly over the Northern Ireland protocol — and UK officials are braced for more “turbulence up to and beyond” next year’s presidential elections.

From as far back as June, French officials said they had asked their Australian counterparts multiple times whether they wanted to change the contract from conventional to nuclear-powered submarines, which France also makes, but these questions were met with silence.

A French diplomat conceded that at a meeting on June 24, Australian officials did ask whether the Attack-class submarines being developed were still adapted to “an evolving and worsening threat environment”.

However, he stressed that there was no mention of a “request to move from conventional to nuclear powered [submarines] and the question was never mentioned to move from a bilat[eral] discussion with us to a trilat[eral] with the US and UK”.

Australian defence minister Peter Dutton has said that the decision was taken because the “French have a version which was not superior to that operated by the United States and the United Kingdom”.

There had also been longstanding concerns in Australia over cost rises and delays to the programme.

French officials and corporate executives have pushed back strongly against the view that operational problems underpinned Australia’s decision, saying that these had been resolved early in the year.