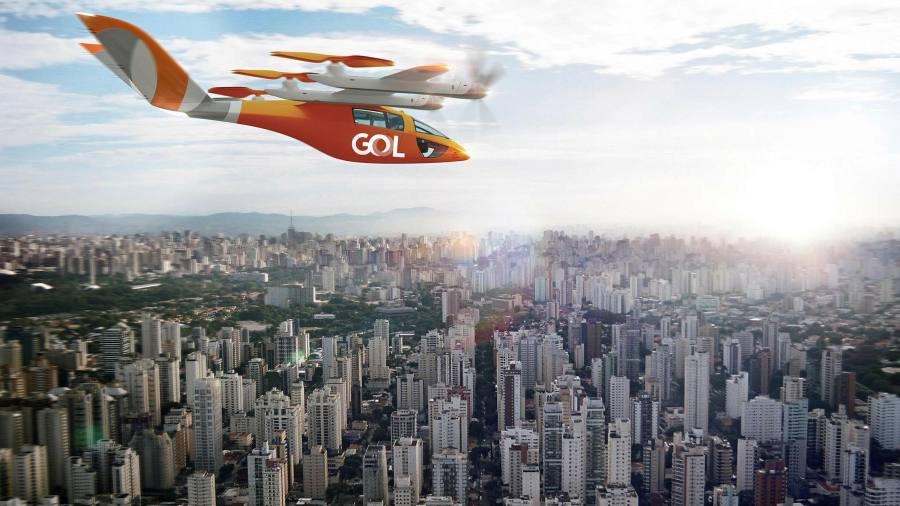 Sign up to myFT Daily Digest to be the first to know about Airlines news.

Brazilian low-cost airline Gol plans to launch a fleet of zero-emission electric air taxis in São Paulo that aim to be as cheap as an Uber.

The carrier will buy or lease 250 of the futuristic aircraft, which look like mini helicopters, from Avolon, according to Dómhnal Slattery, chief executive of the Dublin-based aircraft leasing group.

Avolon bought 500 of the aircraft, valued at $2bn from the UK’s Vertical Aerospace in June, the start-up’s largest single order.

The financial terms of the deal for the air taxis, called VA-X4 eVTOLs (electric vertical take-off and landing aircraft), were not disclosed. Gol declined an interview request.

“It’s going to be an absolute disrupter. We’re going to democratise air travel,” Slattery told the Financial Times. “Helicopters have been the domain of the ultra wealthy.”

Brazil is the ideal country to launch air taxis since it has one of the world’s highest number of helicopters and helipads, Slattery said.

The aircraft, which American Airlines, Virgin Atlantic and others have also bought, are still some years away from commercial flights. Yet to be built, they are expected to be delivered in late 2024 or 2025.

“Our basic estimate at the moment is that the operating cost here for this aircraft will be the equivalent of $1 per passenger over a 25-mile trip,” Slattery said. “We think we can get the cost of this down to the equivalent of an Uber ride, equivalent to downtown Manhattan to JFK.”

The aircraft, designed to transport four passengers plus one pilot, will have power systems designed by Rolls-Royce, Slattery said. Besides taxi services, they could also be used for cargo and medical evacuations.

As safe as an aeroplane but 100 times quieter than a helicopter, with a noise level similar to an air conditioning unit, according to Slattery, the aircraft will have a range of more than 100 miles at speeds up to 200mph.

Slattery said he had “no concerns” about the ability of Gol, which is backed by leading Brazilian transport company Grupo Comporte, to fund the deal.

This month Gol announced a code-sharing deal with American Airlines including a $200m cash injection, which is aimed at bolstering its presence in international markets.

Avolon itself has $6bn in liquidity, giving it the firepower to replicate the Brazilian venture, Slattery said.

“Our eVTOLs will transform how we travel around high population density cities that are clogged with traffic,” Stephen Fitzpatrick, Vertical’s chief executive, said in a statement.

With investors including American Airlines, Avolon, Honeywell, Rolls-Royce and Microsoft’s venture capital fund M12, Vertical plans to go public this year on the New York Stock Exchange through a merger with special purpose acquisition vehicle Broadstone Acquisition, in a deal valuing it at $2.2bn.

Separately, Airbus announced plans for a new electric air vehicle, which it hopes will take to the skies sometime after 2025. The European aerospace group said the new design, dubbed the CityAirbus NextGen, was “our answer to the urban air mobility market”.

The company has been working on a number of different designs in recent years but said it had now “converged” on the new CityAirbus that features fixed wings, a V-shaped tail and eight electrically powered propellers.

The first flight of the prototype, which is designed to carry up to four passengers, is planned for 2023. Airbus said it was targeting certification by regulators “around 2025”.