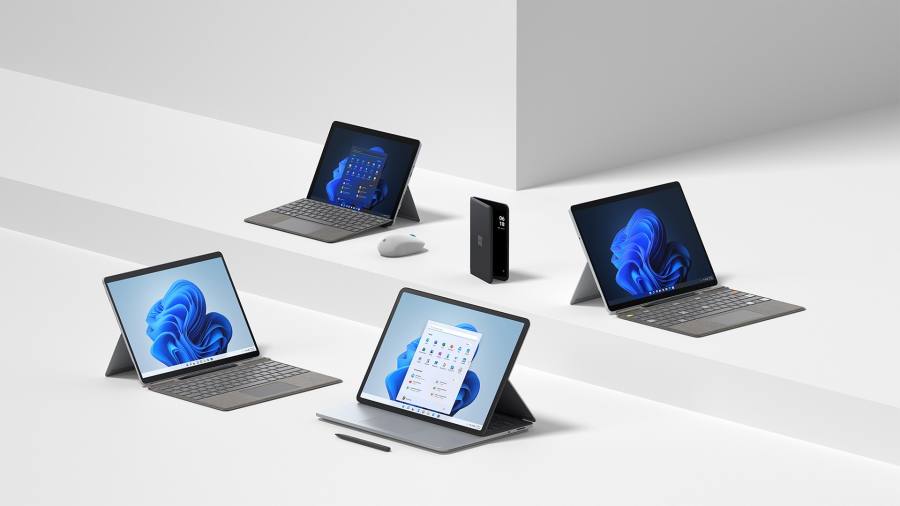 The days when we would be energised by a new Windows operating system launch are long gone (maybe the last time was Windows 95 to the tune of the Rolling Stones’ “Start Me Up”?), but Microsoft’s Surface hardware announcements today could create a frisson of excitement around Windows 11’s debut next month.

Surface itself has become a significant product category for Microsoft after starting out in 2012 as the kind of reference design produced by Intel to inspire a lacklustre PC industry, whose major laptop innovations over the past decade had been to mirror the look of Apple’s MacBook Air.

Microsoft wants the industry to pursue new form factors as well to extend the reach of Windows. Today’s unveilings show it is still leading the charge, with an update to the dual-screen Duo and a crazily-folding Surface Laptop Studio.

The hardware did showcase and tie together with the software in impressive ways, and both exploit the zeitgeist. “Windows 11 is being touted as flexible for hybrid work, adaptive to the way individual users want to work, and deeply connected to collaboration software like Teams,” says Forrester analyst JP Gownder.

The Surface Go 3 demo featured Xbox gaming on a laptop with a linked controller, Teams chat built into Windows 11, a Disney+ app and a Kids mode for the Edge browser. The 5G Surface Duo 2 showed off dual-screen gaming and how the Microsoft 365 suite had been customised for two screens, with Outlook for example having a list view of emails on one side and the preview pane on the other screen. Teams could feature a grid view of everyone on a video call, alongside a whiteboard presentation. Syncing with a laptop or PC, the Duo’s Android apps were accessible and there was copy and paste between the phone and PC.

Microsoft CEO Satya Nadella said the combination of Windows 11’s capabilities with the new Surfaces was a “game-changer”. They go on sale together on October 5, but it remains to be seen whether Microsoft’s third-party software developers and hardware partners will take up the challenge to design for Windows and compete with Apple’s formidable ecosystem.

1. Netflix wins Dahl golden ticket
Netflix has acquired the works of Roald Dahl from the late author’s family, allowing it to further exploit children’s classics such as Charlie and the Chocolate Factory, Matilda and The Witches in the largest content deal of its kind by the video streaming group. Nordic Entertainment Group, the Swedish owner of Viaplay and the main pan-European challenger to Netflix is to launch in the UK, Germany and Canada, betting its offering of Nordic drama will entice viewers. Sony Pictures Networks India has proposed a $1.6bn deal to take control of Zee Entertainment, India’s largest listed media company.

2. The Toast test
Restaurant tech provider Toast tests the appetite of investors in one of the year’s largest US listings on Wednesday. The Boston-based company is offering shares at $40 for an implied market capitalisation of $20bn, more than double the price at which some of its shareholders sold their stock during a tender offer in November. We look at the prospects for Toast and a consumer-driven IPO pipeline.

3. UK music industry faces probe
The British government has called on the competition watchdog to review the structure of the UK music industry because of concerns that the benefits of the streaming boom are not being passed on to musicians. It follows a recommendation by a committee of MPs that called for a “complete reset” to improve “pitiful” payments to musicians.

4. Zoom deal raises national security concerns
The US Department of Justice has raised national security concerns in connection with Zoom’s planned takeover of the cloud software company Five9, calling for a secondary review of the web conferencing provider’s agreed $14.7bn deal. Zoom’s reliance on a large base of developers in China has long raised questions about potential Chinese influence on its operations.

5. Oversight board investigates Facebook
Facebook’s oversight board is investigating claims the social media group allowed some high-profile users to break its rules and accused the company of withholding information on the matter. According to an exposé by the Wall Street Journal published last week, a content review system was sometimes used to shield some users from enforcement of its rules.

Microsoft’s newest Surface is a premium laptop, starting at $1,600 and featuring an odd sliding mechanism that is like an easel in allowing you to adjust the display at an angle towards you (Stage mode) or lay it flat like a tablet in Studio mode.

It’s hard to assess without trying it, but some people are clearly impressed: ““The Surface Laptop Studio is the new halo product in the Surface line,” said Geoff Blaber at the CCS Insight research firm. “We expect the device to repeat the success of the Surface Pro line and catalyse a wave of product development as the industry iterates on the concept.” The Verge calls it “one weird, powerful computer” and is befuddled by the thick plinth, which also stores the new Surface Slim Pen 2.

There is a 14.4in display, Full HD camera, four speakers and powerful processor and graphics options. It’s available along with Windows 11 on October 5.