Analyst Horace Dediu argues that the iPhone 13 series is “the most important iPhone ever” and has some interesting charts to share that show the evolution of iPhone prices over the years. It’s not the prices that make the iPhones so important, of course, but they are fascinating, so let’s start with them.

The current iPhone line-up is bigger and more convoluted than ever, it spans from $400 to $1,600 across a variety of models and storage options. This is not accounting for sales taxes and carrier promos, which make things even more convoluted.

Check out this pricing chart that tracks the prices of iPhone models over the years. It starts simple but keeps branching over the years (it includes older models that were kept around with a discount). 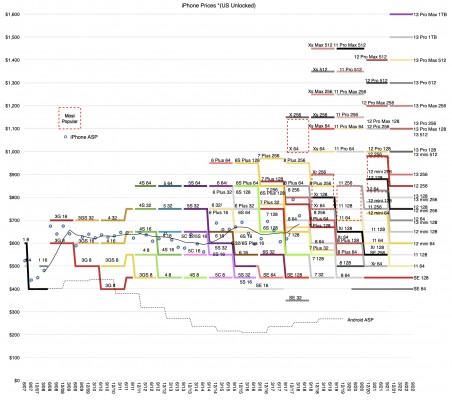 The evolution of iPhone prices since the beginning

Of course these are the prices of new units, the second hand market for old iPhones is bigger than any other smartphone series. Apple is accepting trade-ins as old as the iPhone 6s, though you won’t get a huge discount for those older models. You could get a lot more by selling the phone to someone else.

This next chart shows the price of new iPhones (grouped by launch date) and how much that price fell in 2019. Newer iPhones drift to the right, showing the growing starting cost of the top end model, but also spread out as Apple introduced more and more versions.

On the right is the same but for Samsung phones. The prices are much more sporadic and the final value of the phone tends to be further apart from its original selling price. 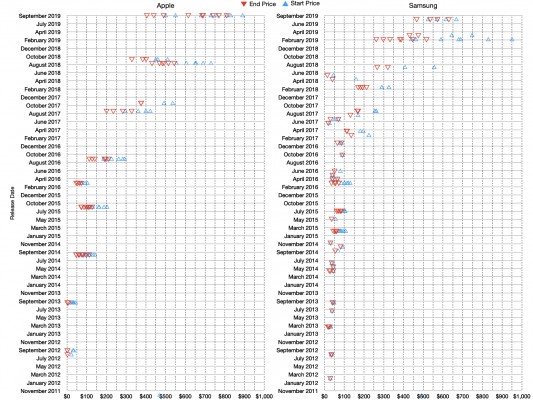 Price drops for Apple and Samsung phones across 2019

So, how is the iPhone 13 the most important launch? Dediu argues that it is because Apple continues to be an innovator – it creates trends rather than following them. The camera upgrades to the 13-series in particular will be highly influential, predicts the analyst.

Things like rack focus, adjustable focus on already recorded videos and so on will be picked up by YouTubers, TikTokers and other influencers, which in turn will shift the perception of what features a modern smartphone should have.

“What makes the iPhone and perhaps Apple special is that it seems to deliver things that nobody asks for but then everybody wants while eschewing overshooting a performance dimension that a few demand but most won’t use.”

Check out the blog post for more on Dediu’s thoughts on why the iPhone 13 is just so important for the future of the smartphone market.