Motorola hasn’t released a new tablet in 10 years, but the drought is about to end. Indian retailer Flipkart has revealed that the company will launch the Moto Tab G20 on September 30 (next Thursday).

This tablet will be aimed mostly at kids who will use it for school work and entertainment. It will run near-stock Android 11 with Kids mode. And it will have a metal body, which should make it quite durable.

Other than that it is nothing fancy, mostly going for “affordable”. It will have an 8” IPS LCD and Dolby Atmos audio. Android will be running on a Helio P22T chipset (12 nm, 8x A53 CPU) with 3 GB of RAM and 32 GB storage (there should be a microSD slot). 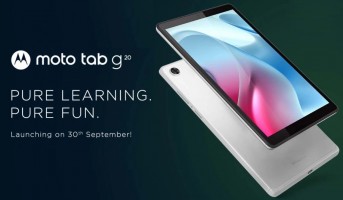 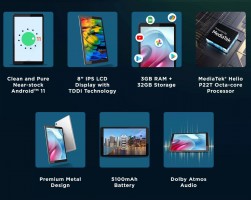 The battery will be on the small side with 5,100 mAh capacity. This sounds a lot like the Lenovo Tab M8 (3rd gen) tablet that was unveiled earlier this year and will be competing with the likes of the Samsung Galaxy Tab A7 Lite (also from earlier this year, starting at INR 12,000).

Flipkart has yet more reveals from Motorola coming on October 1, so next week will be busy (there should be a new TV, among other things). As it should be, the Big Billion Days promo campaign is in full swing.