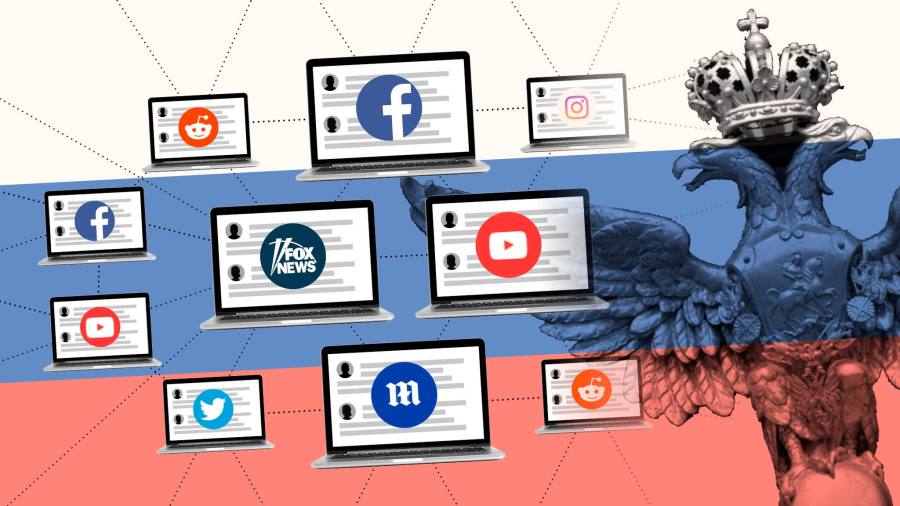 Until July 2020, Ruslan Ostashko claims he was making $15,000 a month pumping out pro-Kremlin propaganda on YouTube.

But then YouTube “demonetised” his channel, PolitRussia, stopping it from earning a share of advertising revenue from views of its videos. When he tried to challenge the decision, he was told he would have to pursue legal action in the US.

“We’ve had difficulties with western social networks,” lamented Ostashko. “Our main platform is YouTube and we’ve had monetisation disabled for almost two years now.” In response, PolitRussia now appeals for reader donations at the end of each video.

Many of the banned posts and accounts have been linked to the internet Research Agency, the Kremlin-backed group that was accused of using social media to try to influence the outcome of the 2016 US presidential election, or to the GRU, Russia’s military intelligence service.

“You can’t predict when Facebook will decide to take something down,” he said. “They’ve switched from social networks to other channels of communication.”

Researchers at Cardiff University found that the reader comment sections of western media outlets such as the Daily Mail, the Daily Express, Fox News and Der Spiegel are increasingly being manipulated by propagandists, who then point to pro-Kremlin comments as evidence of sympathy for the Russian government in the west.

The comments are used as the basis for positive news stories in the Russian media, such as the news website inoSMI.ru, with headlines such as “Fox News readers: Russians are afraid of no one” and “German readers: Russians will always be one step ahead of Nato.”

InoSMI.ru is an online media outlet that translates foreign press articles about Russia and its interests abroad, for Russian-speaking audiences in Russia and eastern Europe. It is part of Rossiya Segodnya, a news agency owned and operated by the Russian government. It garners around 270,000 unique visits per day and from February to April 2021, more than two-thirds of its articles followed the “readers think” formula.

Its content is then reposted by a large international network of news sites across Europe, such as the PolitRussia and the Patriot Media Group, a conglomerate owned by Evgenii Prigozhin, who was indicted by a US grand jury for organising activities for the purpose of interference in the 2016 US presidential election.

Ostashko, who uses user comments to generate content for his channel, said: “We often use your readers’ comments as proof that the west understands us and that our politics are much better than how your politicians and journalists portray.”

Professor Martin Innes, director of Cardiff’s Crime and Security Research Institute, said that western media outlets are being targeted due to “their vulnerability and the lack of defences that are in place”.

Having conducted a “penetration test” of 18 high-profile national news outlets across the UK, US, France and Germany researchers found that no identity checks are made, online pseudonyms can be easily changed and that there is a “consistent lack of moderation and oversight”.

According to Peter Pomerantsev, a fellow at the SNF Agora Institute at Johns Hopkins University, the articles contribute to a wider narrative about Russia’s place in the world.

“The big strategic narrative of Russian propaganda is that there is no alternative to Putin,” he said. “The aim is to show that the west is corrupt, unhappy or full of Putin supporters. It might seem like quite a small operation, but it’s part of a much bigger and steady investment.”

Other efforts to skirt the restrictions imposed by social media platforms include the use of so-called mirror sites, new websites that are not on blacklists and which pop up to repost content from banned outlets.

Newsfront, a website set up in 2014 during the annexation of Crimea, and described by the US state department as part of a network of sites that “proliferate Russian disinformation and propaganda”, has been found to use mirror sites to spread exact copies of its articles across social media.

Clint Watts, a non-resident fellow at the Alliance for Securing Democracy and co-author of the report, said: “I think what is interesting is how important they see social media for distribution. We catch them almost weekly.”

Facebook said it was unable to comment on how many mirror sites have been identified on the site, but said added that “adversarial actors” are changing tactics in response to enforcement and that it was evolving its own defences in response.

Last week the company told Reuters that it has begun using the same approaches it uses to shut down networks of fake accounts to deal with networks of real-user accounts engaging in “co-ordinated social harm”. In July Facebook used these methods to remove real accounts associated with the Vietnamese army’s online information warfare unit.

Restricted news outlets also use seemingly independent anonymous writers and bloggers to copy out articles verbatim and post them on their feeds, as well as posting their content on alternative platforms such as Reddit, Parler and Telegram in the hope that it will be cross posted to one of the larger platforms.

“That’s tougher for social media platforms to police, because if someone posts something on their feed, are they a Russian actor? Probably not.” said Watts.

Konstantin Knyrik, a pro-Kremlin activist and Newsfront’s editor-in-chief, claimed this activity is uncoordinated: “Most of our contributors are not professional journalists, but ordinary people with convictions, who follow us and share our materials voluntarily.”

Reddit said its policies prohibited disinformation and it had taken action to prevent disinformation outlets and agents on its platform “for years”. Meanwhile, Ostanko said he was prepared for YouTube to act against the channel again.

“We’ve already created a whole community of channels on YouTube, so we have options if they decide to delete our channel again. No one will take away our right to speak.”