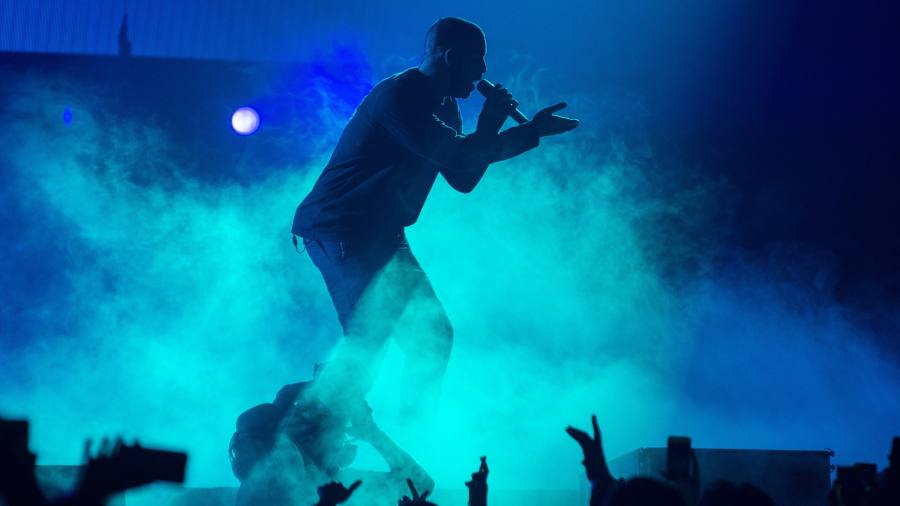 Sign up to myFT Daily Digest to be the first to know about Universal Music Group news.

Bill Ackman compared it to “food and water”. Universal Music’s chief executive Lucian Grainge says it is “as critical as gas and electricity”.

This week, Wall Street gave its view on music with the initial public offering of Universal, weighing in on a question that has become more pressing among investors in the past few years: how much a melody is really worth?

On the surface, the soaring valuation for music companies — Universal is trading at about a €42bn valuation, up from €30bn earlier this year when Tencent made an investment in the company and $8.5bn less than a decade ago — is inextricable from the rise of Spotify. The widely accepted explanation is that Spotify saved the music industry.

And this is true. The invention of an app where people can pay to listen to 70m songs has undoubtedly powered the turnround in music revenue, after more than a decade of death by piracy.

But the stock market is usually more about the future than the past. Reading through Wall Street banks’ explanations for their fizzy valuations for Universal, their bullishness is linked to expected further growth. And the future of music revenue is not all about Spotify.

In fact, when I asked Grainge how much scope there is for more growth, he pointed not to Spotify, but to “new areas of monetisation we couldn’t even predict before”.

This means music listened to on a Peloton bike, or played in the background of a video on the YouTube Shorts platform, or in the booming virtual worlds of gaming, augmented reality and online karaoke.

If the concept that a computer-generated avatar of your favourite musician “performing” on TikTok is a legitimate revenue driver for a $50bn company seems far-fetched, I am here to inform you it is already happening.

Before the internet, music’s bread and butter was physical compilations, in the form of vinyl records, cassettes and then CDs. If a few of these became popular, they earned enough money to make up for thousands of other failed bets. Now, music is intellectual property that can be milked across a dizzying array of uses.

Some of these avenues for monetisation are obvious, such as TikTok, which attracts billions of people as a place for silly videos soundtracked to songs. Others are less intuitive. Universal, for example, is looking into licensing its catalogue to therapeutics companies that use music to help stroke victims walk again.

The big music companies, at this point, know how to predict how much money they will receive from Spotify in a given quarter — even if there are torturous negotiations every few years on how to split the streaming revenue pot. This is part of the pitch to investors: subscriptions have made music a more reliable asset class, compared with the era of CDs, where sales were reliant on big hits.

But the music companies have little experience in predicting revenue from social media. Warner Music’s chief executive Steve Cooper marvelled to me last year that these were business models “that nobody had heard of two years ago, literally”.

Less than three years ago, TikTok and Facebook were not paying the music companies at all. Now, the music industry is making $2bn a year from social, fitness and gaming royalties, estimates Mark Mulligan, analyst at Midia, and that is only expected to rise.

Sony Music says social, gaming and fitness now bring in $400m in revenue annually, while Warner Music says it makes $235m a year in royalty income from these sectors.

Mulligan says without such revenues, Universal’s IPO would have looked riskier. Facebook was the first to start paying for music, through a deal agreed with Universal at the end of 2017. But now that competition in the sector has heated up, record executives no longer have to convince social media companies to pay for music. “You’ve got Snap, TikTok, Facebook and [YouTube] Shorts all trying to kill each other,” said one label executive, adding this was “fabulous” for music rights.

Universal’s deals for Facebook, TikTok and YouTube Shorts are all set to expire at the end of this year, an opportunity to reset the terms to more generous levels for the music company.

Universal executives want to convince investors they are not buying into music at the top of the market, but rather getting in on an asset that will only rise further. The outcome of these deals, rather than another gargantuan Drake album, is more likely to answer that question.