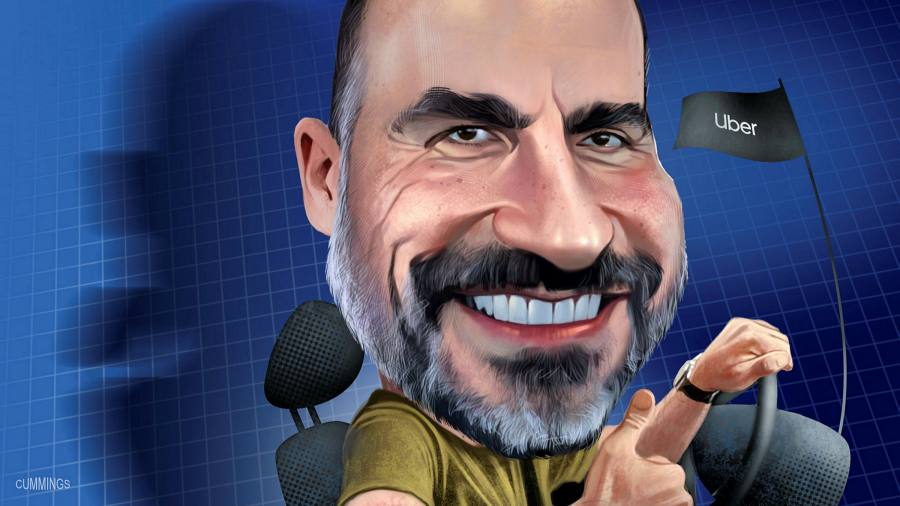 Sign up to myFT Daily Digest to be the first to know about Dara Khosrowshahi news.

When deciding who should succeed the disgraced Travis Kalanick at Uber back in 2017, the board did not at first think Dara Khosrowshahi was the right person for the job.

Jeff Immelt, former chief executive of General Electric, was a frontrunner until a fluffed presentation. Meg Whitman, who at that time was the boss of HP, was next in line — only to lose out due to board squabbles. And so it was, as described in Super Pumped, the seminal book on Uber’s history, that Dara Khosrowshahi, the mild-mannered, silkily-spoken Iranian-American, took the reins at what was then one of the US’s most controversial companies.

As chief executive, Khosrowshahi’s first task was to change that view. His second was to carry Uber to an IPO. Then came perhaps the biggest challenge of all: making the company profitable.

That moment finally came this week when the now-public company dropped an SEC filing stating it was heading into the adjusted black — provided you indulge it in its favoured form of accounting: the Silicon Valley-revered “adjusted Ebitda”. “Uber is reaching an important milestone,” said Khosrowshahi in a statement. “We also know we have much left to prove and need to execute flawlessly.”

The fact that this accounting metric strips out many large expenses has made it the subject of some cynicism from some corners of the press. “There’s certainly a point there,” Khosrowshahi says of his detractors, speaking to the Financial Times this week. “But we think ebitda profitability is a hugely important milestone — on our way to being free cash flow profitable, and then profitable on a GAAP basis, as well. So we’re certainly not satisfied. We’re not stopping here.”

Khosrowshahi, 52, grew up in Tehran within one of Iran’s wealthiest families. They fled in 1979 after a Revolutionary Guard soldier burst through their property. “Bullets rang through our house,” he told the FT last year. The family landed in Tarrytown, New York. To make life easier, Dara became “Darren” in what he said was a “flashpoint of desperation” at people mispronouncing his name. A talent for soccer meant he soon grew in confidence.

After studying bioelectric engineering at Brown University, he headed to Wall Street, landing a job as an analyst at Allen & Company in 1991. Later, under the mentorship of media magnate Barry Diller, Khosrowshahi became the chief executive of travel site Expedia, quadrupling its value over 12 years — a tenure the likes of which he tells the FT he’s ready to repeat at Uber.

Expedia gave him just enough tech chops to pass as capable of running a Silicon Valley giant, the quintessential disrupter. But internally, exasperated though staff were by the often turbulent Kalanick approach, some worried that Khosrowshahi would mean Wall Street thinking — balancing the books instead of aggressively innovating.

To a large degree, they were right. Khosrowshahi set about getting rid of large parts of Uber’s business: selling its self-driving car division, pulling out its food business in countries where it was falling behind and offloading its Jump bikes. About 7,000 employees were laid off during the pandemic.

“If there is good news coming out of this pandemic around the world,” said Youssef Squali, a Wall Street analyst with Truist, “it’s that it really forced [Uber] to get in shape”.

This was all in the cause of the milestone Khosrowshahi has promised investors: an adjusted ebitda profitable quarter by the end of 2021. Tuesday’s news meant that they were going to reach it three months early. “Our delivery business with Uber Eats has grown at rates that we previously could have only dreamt of,” Khosrowshahi says.

The timing of Uber’s announcement had an obvious purpose. The company’s stock price had been trading almost 40 per cent lower than February’s highs. Earlier this month, Uber’s market cap was briefly surpassed by its fierce rival in food delivery, DoorDash — a company with next to no international presence, and no rideshare business.

“It was a moment in time that I think will always be in the past,” Khosrowshahi says, clearly aggrieved at the incident. “We’re bigger than DoorDash. It’s my job to make sure it never happens again.” Uber’s stock was up by about 20 per cent this week.

But his DoorDash “problem” does not begin and end with market cap. The smaller company has come to dominate the US food delivery market, despite Uber’s best efforts. The same risks happening in sectors such as grocery, where small newcomers are gobbling up territory, particularly in Europe, as Uber moves more slowly.

Khosrowshahi’s efforts to rehabilitate Uber’s reputation could be unravelled, as it goes toe-to-toe with drivers seeking employment status and local authorities trying to protect restaurants. A number of major markets, including San Francisco and New York City, have moved to limit the commissions that can be levied on sales of the delivery sector. On top of that, there is continued opposition against the employment model of its core ride-sharing business.

“You have new challenges now,” says Jake Fuller, an Uber analyst at BTIG. “New challenges in front of you [that] include big regulatory challenges the world over.”

As for a real, sustained profit, some analysts think 2023 will be the time. Khosrowshahi won’t be tied to a date, only to suggest it will be sooner rather than later. “It’s not years in the making,” he says.