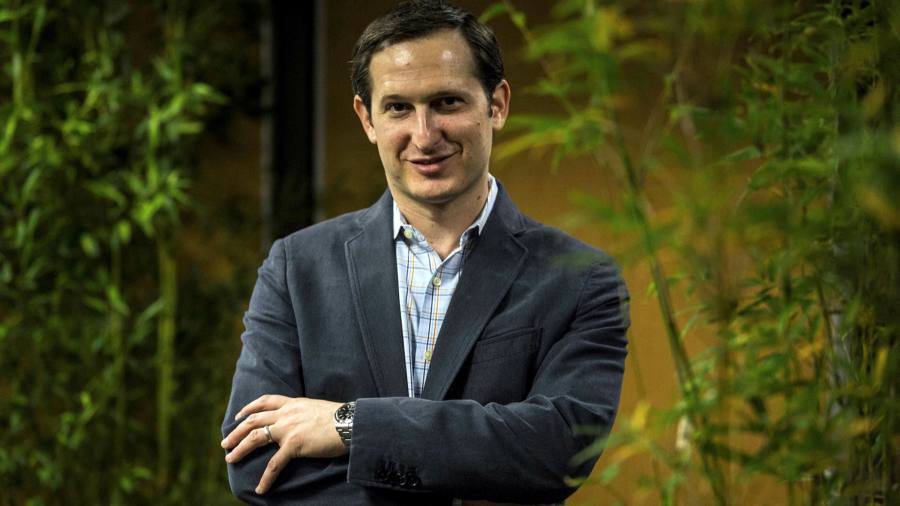 Sign up to myFT Daily Digest to be the first to know about Travel & leisure industry news.

The battle for supremacy in the US sports betting market spilled on to the global stage this week.

DraftKings, which has built its business on US daily fantasy sports, launched an £18.4bn offer for UK-based Entain, longtime competitor of Flutter, owner of its fierce US rival FanDuel.

The offer, for a company that owns brands more than a century older than the nine-year-old start-up and has operations in 17 countries, exceeds DraftKings’ roughly $20bn market capitalisation.

If the deal comes off, DraftKings, which has never turned a profit, will overtake Flutter as the largest listed gambling group in the world.

For those who know Jason Robins, DraftKings’ co-founder and chief executive, such an ambitious play was no surprise.

“It made so much sense,” said Manu Smadja, who worked with Robins — “obsessed with competitive activity” — and co-founder Matt Kalish before they launched DraftKings alongside Paul Liberman.

They would stay until midnight at Capital One’s suburban Boston offices, said Smadja, “geeking out over data tables” and debating baseball statistics. When they went for lunch, “we’d play credit card roulette to decide who would pick up the bill”.

Jeremy Kudon, a partner at the law firm Orrick, which advises DraftKings, likens working with 40-year-old Robins to playing basketball with Michael Jordan: “So long as you can keep up with him, which is admittedly not easy, he pushes you to a level of excellence that you didn’t think you were capable of attaining.”

While the Entain board consults shareholders, industry executives, bankers and analysts have questioned whether this is a reckless bid or if it will be Robins’ most audacious move yet.

“Jason has gotten himself into a bind,” said one person close to the proposed deal, which they compared to “a modern-day AOL-Time Warner” if successful. “He has global ambitions but he is in desperate need of cash flow.”

Robins declined to comment, but DraftKings said the company was “incredibly well capitalised with over $2.6bn on the balance sheet as of the end of last quarter”.

DraftKings was built on Robins’ talent for raising money during boom years for daily fantasy sports, where customers assemble fantasy teams of real life sports players and win money based on their performance.

One industry veteran said that Robins was “aggressive . . . in terms of exploring opportunities he sees” and “an amazing fundraiser”. He raised roughly $1bn for the group between 2012 and 2019 and analysts estimate that over 2015 and 2016, DraftKings spent up to $600m on advertising to compete with FanDuel.

But regulators were circling the two companies as they saw daily fantasy sports as too close to betting, which was then illegal outside Nevada. Before the Supreme Court overturned the federal ban on sports betting in 2018, DraftKings “was on the brink of collapse on several occasions”, the person said.

In 2015, scandal erupted after a mid-level DraftKings employee won $350,000 on FanDuel, prompting investigations from federal and state regulators.

FanDuel and DraftKings briefly flirted with the idea of a merger in 2016 before competition authorities weighed in.

FanDuel was later bought by Flutter but DraftKings remained independent before listing via a special purpose acquisition company.

Its market value has risen more than sixfold since its listing in April 2020 through a merger with Diamond Eagle Acquisition Corp, a Spac led by the veteran Hollywood executives Harry Sloan and Jeff Sagansky.

Sports betting is a natural milieu for Robins. He has noted previously that his early interest in sports developed into a habit of playing memory games with results, when he realised he did not have natural talent on the field.

Robins launched DraftKings in Boston a decade after graduating in economics and computer science at sports-mad Duke University and keeps a suite at the New England Patriots football stadium.

Jason Frishman, founder of investment firm Netcapital and a protégé of Robins, meets him there but said: “He likes going to sporting events, though how much of that at this point is pleasure and how much of it is professional is difficult to say.”

In February, Robins told the FT: “There is a lot happening now in the US. We are thinking about international but we have so much going on in the US that we haven’t really been able to focus on it.”

Some of that work has included urging professional sports leagues to rethink their long-held resistance to betting.

Scoreboard is the Financial Times’ new must-read weekly briefing on the business of sport, where you’ll find the best analysis of financial issues affecting clubs, franchises, owners, investors and media groups across the global industry. Sign up here.

“Jason and his team continually push us to think differently about these categories and consider policy shifts,” said Renie Anderson, chief revenue officer of the National Football League and executive vice-president of its partnerships programme.

Still, the exponential growth of the more than $2bn US sports betting market and the company’s share price seems to have changed Robins’ mind about overseas ventures.

One last obstacle stands in his way: the casino giant MGM, which runs a joint venture in the US with Entain. MGM has said any deal would need its consent.

FanDuel founder Nigel Eccles said MGM was unlikely to stop his rival. Robins is “an exceptional entrepreneur,” he said. “He is single-mindedly focused on being the largest player in sports betting and will do anything to get there.”