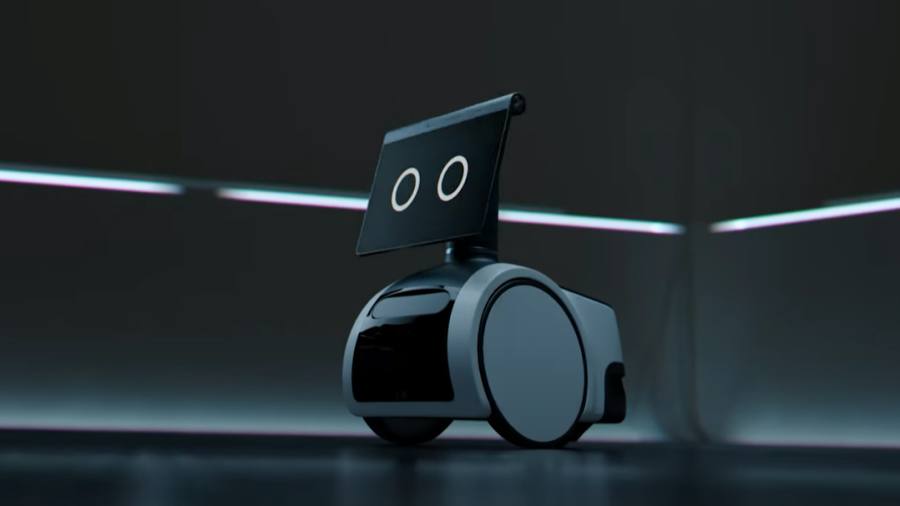 “There are some really nice gadgets,” was all Ben Whishaw, alias Q, would say on the red carpet for the world premiere of No Time To Die at the Royal Albert Hall in London this evening.

He was obviously still sworn to secrecy about the surprises in the 25th Bond film and Daniel Craig’s last in the role. At the same time though, the secrets were coming out on Amazon’s latest products (see Tech Tools below) at its annual devices event in the US.

Chief among them was Astro, a robot able to find its way round your home using sophisticated AI and the mastery of something known in robotics as Slam — Simultaneous localisation and mapping.

The robot is arguably Amazon’s boldest new hardware product since the release of the original Amazon Echo voice assistant in 2014, says Dave Lee in San Francisco.

It can be sent to specific locations in the home and a periscope camera rises from the top of the device and can film up to eye height. It can follow users as they conduct video calls. A touch screen on the front of Astro displays two large cartoon eyes as a means of making it look more approachable, its engineers said in a promotional video. It was billed as a way to check on pets or elderly relatives.

Amazon said it would cost $999 and ship to a limited number of customers later this year, having been in development for the past four years.

It’s tempting to think Astro is something of a Bond gadget — a gimmick that is unlikely to appear as a mass market product for many years, if at all.

But Amazon’s device chief Dave Limp said: “In five to 10 years, we believe every home will have at least one robot that will become a core part of your everyday life.” And the engineers that developed it clearly felt they had made breakthroughs in robotics.

“This is our first robot, not our last robot,” said Gregg Zehr, president of Amazon’s R&D outfit Lab126.

1. AutoStore has IPO in store
In other robot news, SoftBank-backed warehouse robotics group AutoStore is planning a stock market listing next month in Oslo that could value the business at almost $12bn. AutoStore had revenues of $182m last year but is aiming for $300m in 2021 and more than $500m next year, as demand from grocery retailers and online sellers increases sharply.

3. Britain’s ‘scientific superpower’ ambitions
On Monday, we had the first National Space Strategy from the UK, as Boris Johnson promised to build “Galactic Britain”. Today, our Science editor Clive Cookson looks at the government’s focus on tech leadership, following an innovation strategy, published in July, that gave an insight into ministers’ focus on industries of the future. The UK is currently a G7 laggard in R&D spending, but public investment is set to rise from £14.9bn this year to £22bn in 2024-25.

4. Ford’s record electric truck investment
Ford and battery maker SK Innovation of South Korea have committed to spend $11bn to build three plants in Kentucky and Tennessee to produce battery-powered versions of the popular F-series pick-up trucks. The investment is the largest Ford has made in manufacturing facilities in its 118-year history.

5. Google under attack in Oz for ad dominance
Australia’s antitrust regulator has called for laws to reduce Google’s market dominance in online advertising, in the latest salvo by the country against Big Tech following groundbreaking media reforms this year. A report from the Australian Competition and Consumer Commission estimated more than 90 per cent of the country’s A$2.8bn (US$2bn) open display advertising involved at least one Google service in 2020.

Amazon announced a slew of new services and devices at its annual showcase today. As part of its updates to the Ring system, Amazon said it would launch a subscription service that would enable a remote worker to access a customer’s live feed from the home to assess any danger, such as an intruder, reports Dave Lee. The $99-per-month “virtual security guard” will be launched in partnership with security company Rapid Response.

Amazon Glow is a small video chat device aimed at children, and a wall-mounted version of its Echo device, the Show 15, changes its display based on recognising the person looking at it. Other announcements included a partnership with Disney that will see Alexa installed in hotel rooms at the entertainment giant’s resorts, whereby “Hey Disney” will become a command used to ask questions about the parks or to interact with characters.

And the company’s fitness wristband line — Halo — will now include a Vue device with a small AMOLED screen, as well as subscription services for workouts and nutritional guidance.