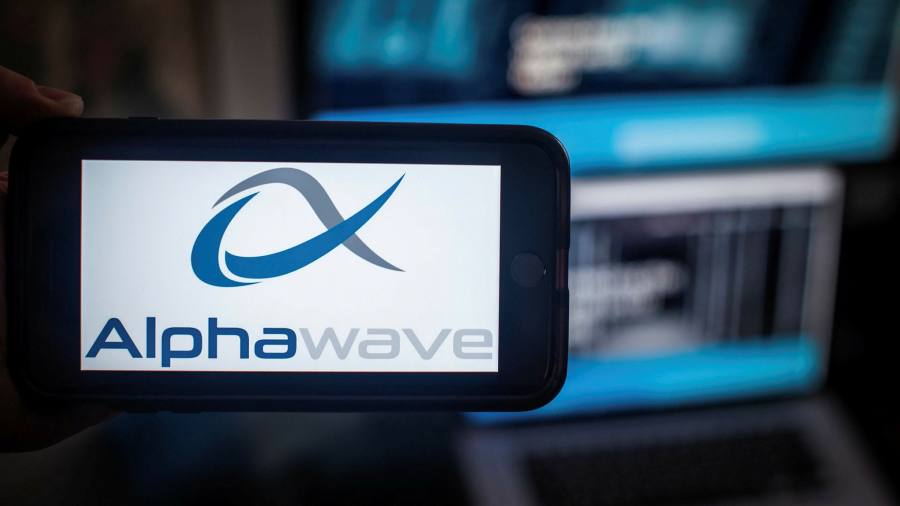 In a year of widespread incredulity over speculative tech IPOs, semiconductor group Alphawave’s £856m London listing in May passed with little more than a market murmur.

After securing cornerstone investments from blue-chip asset managers BlackRock and Janus Henderson, the Toronto-based chip IP group listed at a market value of over £3bn. Not bad for a company that unveiled its existence to the world only two years earlier, in an intriguing announcement declaring that it was “finally ready to come out of stealth mode”.

While the shares fell as much as 24 per cent on the first day of trading, and have struggled to consistently break past their listing price of 410p ever since, Alphawave still ranks as the London market’s most valuable company in the semiconductor sector.

In a show of deep insecurity about its dwindling relevance pride at attracting a burgeoning international technology company to its bourse, the London Stock Exchange announced that the Canadian firm’s listing “demonstrates the many unique advantages of London’s public markets for ambitious DeepTech companies”.

But why did Alphawave pick London to list rather than its home turf of Toronto, or tech-heavy New York?

Alphawave cited the example of silicon trailblazer ARM, seemingly in a bid to attract British investors still mourning the loss of the chip architecture firm that SoftBank acquired for £24bn in 2016. Alphawave has even teased the idea of setting up a new R&D centre in Cambridge, in the so-called “Silicon Fen” that ARM also calls home.

Like ARM, Alphawave doesn’t actually manufacture anything itself. Instead, it licenses its intellectual property to chip foundries and manufacturers, allowing these firms to create devices that transmit data both faster and with the lowest level of power possible. In a world where everything from autonomous vehicles to cloud data centres will require reliable data movement, you can see why some investors would find it a pretty sexy pitch.

Alphawave’s economics aren’t bad either. Its interim results, published a week ago, boasted 95 per cent gross margins, with revenue more than doubling to $28m and bookings — the projected value of all its future contracts — rising almost sixfold to $196m. Combined with an increase in guidance, the results helped its shares to a 20 per cent rise on the day, to 408p.

The rapidly growing bookings figure is crucial for the company, because when it comes to owning a business trading at a heady 42 times forward sales, investors want reassurance that Alphawave will continue to grow like a weed for the foreseeable future.

Yet take a closer look at the breakdown of where these orders came from, and the channels seem closer to Alphawave than you might expect for a fast-growing enterprise now worth billions of pounds.

Back when it emerged from stealth mode, Alphawave relied heavily on sales to related parties.

The group’s chair and co-founder John Lofton Holt is also the chair and founder of another semiconductor company called Achronix. The privately held Californian business has been a major customer of Alphawave. In the 12 months to May 2019, 90 per cent of Alphawave’s $6.9m revenue came from “a company on which a director is the chair of the board”, according to its IPO prospectus.

But that was then and this is now. Like much of the chip world, Alphawave has looked east in search of growth, securing big bookings from Chinese companies.

Here’s the first line of the summary from the recent results:

Alphawave IP delivered strong half-year results with bookings of US$196.1m, an increase of 492% from H1 2020, including US$147.8m of bookings for recurring revenue subscription licences from VeriSilicon and CPP.

While that’s quite some growth rate, it also means that three-quarters of its bookings came from just two companies. So who are they?

Let’s start with CPP first. Short for “China Product Partnership”, the group is transparently a related party, as it is a company formed between Alphawave and one of its own shareholders — the Beijing-based private equity firm Wise Road Capital.

The deal’s terms as outlined in the IPO prospectus and the interim results are curiously circular.

The CPP has a non-exclusive licence, worth $109m, to use Alphawave’s IP over a period of five years in the hope of establishing a “leading networking semiconductor vendor serving the Chinese market”. But Alphawave has also committed to invest $170m in the entity to fund its operations, with Wise Road contributing $230m.

Alphawave is also set to use funds it raised from the IPO towards paying the first $42.5m tranche of this investment, expected to be paid this quarter.

Despite the “in one door, out the other” nature of this agreement, investors seem comfortable enough with the deal. While the size of the payments wasn’t disclosed in Alphawave’s initial registration statement, published on April 22, it was in its updated prospectus published a month later.

Shareholders may not be aware of Alphawave’s close ties to its other major new Chinese partner, however. That’s because these links were not outlined in its IPO prospectus.

In February, Alphawave signed a $54m reseller and subscription deal with VeriSilicon.

The company, which describes itself as a “Silicon Platform as a Service Company” (occasionally using the catchy acronym “SiPaaS”), is listed in Shanghai with a market cap of over $5bn. Founded by Wayne Dai in 2001, VeriSilicon specialises in both the design and licensing of chips for its corporate customers. Wayne’s brother, Wei-Jin Dai, also works at the business.

If the Dai family name rings a bell, it’s because it has a storied history in semiconductors.

Dai’s sister is Weili Dai, the co-founder of $52bn Marvell, the American semiconductor producer and designer. She founded the business with her husband, Sehat Sutardja, in 1995.

It was, for a long time, one of Silicon Valley’s great success stories. But the fairytale came to an unhappy end in 2016 when Dai and Sutardja were removed from their management positions at the company, after the audit committee discovered issues with its revenue recognition. The SEC later charged Marvell over misleading disclosures in its accounting and levied a fine of $5.5m. The company did not admit or deny the regulator’s findings.

So what’s this got to do with Alphawave?

For one, Sehat Sutardja sits on its board as an executive director. But that’s not all. His family investment vehicle — Sutardja Family LLC — also owns 11.9 per cent of the business, according to the IPO prospectus. According to a Form 4 filed in 2017, Weili Dai and Sutardja are the managers of this entity.

Ms Dai was also a disclosed shareholder in VeriSilicon when the company filed for its aborted US IPO back in 2015, while Marvell disclosed the following year that Sutardja also held a stake in the Chinese chip company.

So Alphawave has a $54m multiyear contract, worth just under half its stated backlog at IPO, with a company that is run by a key shareholder and director’s brother-in-law.

But is it a related party transaction?

Well, VeriSilicon considered the family ties so close that Alphawave does indeed qualify as a related party. In its own announcement of the tie-up — which described the deal as a “connected transaction” — the company also stated that both Dai brothers had to recuse themselves from the board when the transaction was voted on, to avoid a conflict of interest.

And yet, there’s no mention of Sutardja’s close family ties to VeriSilicon in Alphawave’s IPO prospectus, nor its interim results. This is despite the fact that the company did disclose that Sutardja is a director and shareholder at two of its customers, listing these roles in the “Conflicts of Interest” section of the prospectus.

FT Alphaville figured this is likely down to a discrepancy between local disclosure rules, so we asked Alphawave to clear up our confusion and it said:

Alphawave IP has met all its disclosure requirements before, during and since the IPO, and will continue to do so. The company strongly refutes any accusation of a lack of transparency and has performed its financial reporting entirely in line with its obligations. All the relationships between the company and its resellers and partners were explained in detail during the company’s conversations with potential shareholders and revenues from any related party transaction have been reported in our financial results. The company signed its subscription agreement with VeriSilicon in February 2021 and has not recognised any revenues from that transaction to date. This was also explicitly stated in the interim results.

It is notable, however, that another of Alphawave’s related party customers has recently come under regulatory scrutiny.

The company was due to end nearly two decades of private ownership by going public via a Spac earlier this year. The merger with ACE Convergence Acquisition Corporation was called off in July, however.

In its latest quarterly results, ACE disclosed the likely root cause: the SEC informed the company that it was “investigating certain disclosures” made in its Spac prospectus. ACE added that, as of the time of the August 16 release, the investigation was ongoing.

Family and friends are often the first port of call for a new business raising money. Alphawave’s investors, however, might start wondering whether a £2.5bn business should still depend on those close to it quite so much, or whether it’s about time to grow up, and leave the nest.