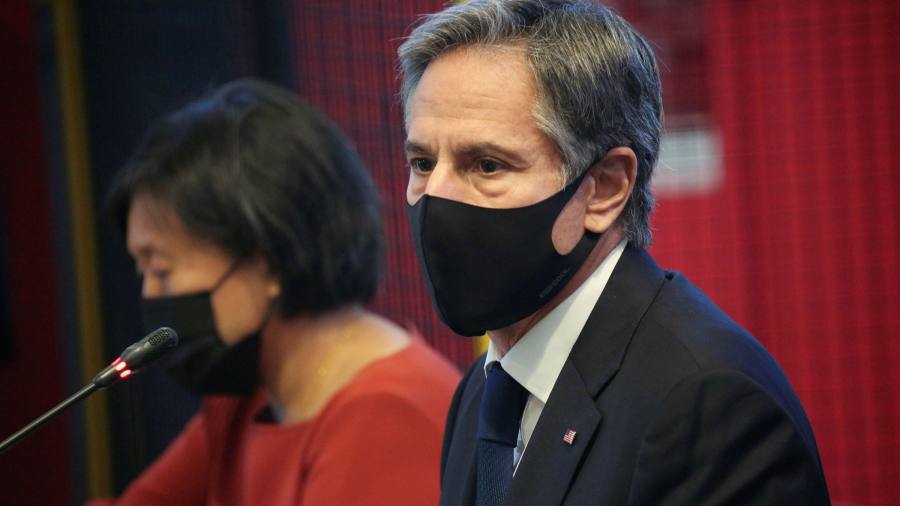 US secretary of state Antony Blinken has called for the US and Europe to improve information sharing on companies that pose a risk to national security, in a sign of growing White House appetite for more security co-ordination with the EU after their flare-up in tensions over a submarine defence contract.

Blinken’s proposal goes further than the terms agreed this week by the White House and the European Commission at an inaugural trade and technology summit in Pittsburgh on a slew of new measures aimed at alignment on emerging technologies, export controls and foreign direct investment rules.

Blinken, who spoke to the FT alongside commerce secretary Gina Raimondo and US trade representative Katherine Tai, said it was “critical” to have “the right mechanisms to share that information on a real time basis” with European counterparts.

Wednesday’s summit took place despite a push from France earlier this month for Brussels to postpone the summit in anger over a new Indo-Pacific pact between the US, Australia and the UK, known as Aukus, which excluded Paris and led to the cancellation of a multibillion-dollar French submarine contract.

Blinken’s call for faster and more effective transatlantic information sharing echoes desires from some Brussels officials to increase communication with the White House in the wake of the fallout. Establishing an “ongoing dialogue . . . on security and defence” would be a positive outcome from the submarine spat, a senior EU official said this week.

US officials, who met EU trade chief Valdis Dombrovskis and the EU’s head of digital and competition policy Margrethe Vestager, were also keen to present a good working relationship.

US president Joe Biden wants to “turn the page with the European Union in terms of enhancing our relationship, dialling down tensions and turning us towards a collaboration that’s forward looking”, Tai said.

The US, which is concerned about companies with links to China’s or Russia’s militaries and the export of “dual use” technologies that could have military application, has increasingly required US companies to have government authorisation when selling potentially sensitive technologies to firms such as China’s telecoms company Huawei.

However, while the Europe and the US said in a joint summit statement on Wednesday that they would carry out technical consultations on developing “convergent” approaches for the control of sensitive technologies, they mentioned only meeting “periodically . . . to exchange information on investment trends”.

Under former president Donald Trump, the US ratcheted up use of the Commerce Department’s so-called entity list that forced US companies to seek licences before exporting sensitive technologies to companies such as Huawei and Semiconductor Manufacturing International Corporation, China’s biggest chipmaker.

Biden’s Commerce Department has continued adding companies to this list and restricting US exports to them. However, Raimondo said that “unilaterally enforced” export controls were “not effective”.

One stumbling block for greater alignment is that EU member states are responsible for national security matters, leaving the commission as a co-ordination and monitoring body. A third of all member states do not even have a foreign direct investment screening law.

Blinken stressed that neither Washington nor Brussels wanted export controls to stymie broader trade and investment. “The point is really identifying the most sensitive areas to work together and to build a very high fence around a very small piece of land, as opposed to putting a very low fence around everything,” he said.