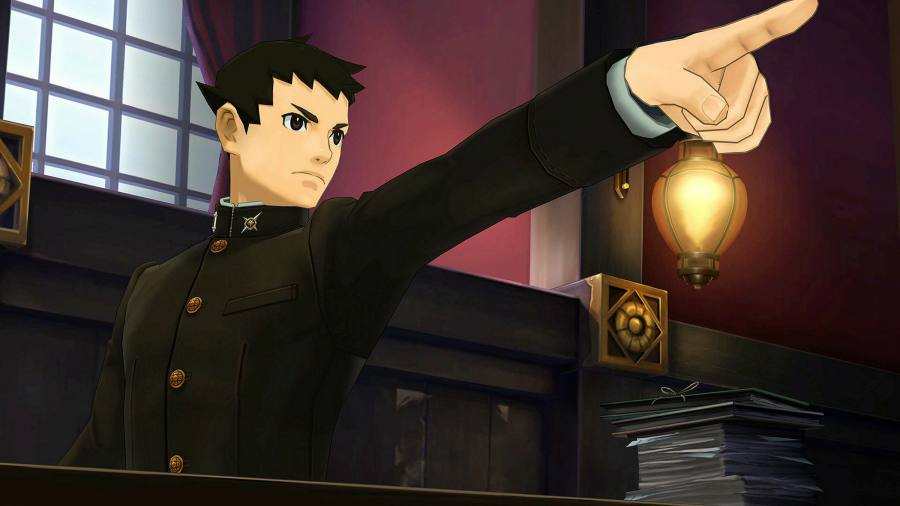 The esteemed professor has been murdered and I’m the chief suspect. Not an ideal state of affairs, but rather commonplace in the world of The Great Ace Attorney Chronicles, the latest in a series of eccentric Japanese legal games I’ve loved since childhood. Today I am not merely the accused but also a lawyer in training, so naturally I will defend myself in court. “Prepare to argue your case, Naruhodo,” my friend Kazuma instructs me. “Press [R] to look at your collected evidence!”

Wait a minute. There is more than a little dissonance in this line of dialogue. In the first sentence, Kazuma is talking to my character, Ryunosuke Naruhodo. In the second, he addresses me, the player, telling me which button to press on my controller. It’s a clumsy moment of narrative design that shatters the fourth wall and, with it, my immersion in the game’s reality. While I love the storytelling of this series, the tutorials for each game are condescending, confusing and glacially slow. I’m eight games deep in the series and I’m a dab hand at sniffing out perjury and cross-examining witnesses. So why can’t I cut straight to the legal melodrama I know and love?

Tutorials are unique to gaming as a medium: neither films nor albums need to teach people how to consume them, but the first thing any game must do is teach players its rules and controls. Despite their ubiquity, few games get tutorials right: explain too much and players feel patronised, but omit essential details and they get confused. Though they make up only a fraction of a game, tutorials are vital — like the opening line of a novel, they determine the player’s first impressions. Get it wrong and they might simply give up and try another game.

Today’s games thread lessons throughout the story, only introducing mechanics when they become relevant

Ask the average player and they’ll tell you that there is something fundamentally joyless about a tutorial: it’s the sludge you have to wade through to get to the good bit. They might point to the clichés of elderly mentors who train you in a dojo, fairy companions who give hints at key moments or confusing scenes where a legendary warrior is made to relearn the most basic attacks. To be fair to developers, tutorials demand a balancing act: they need to accommodate players who learn in different ways, whether visual, audio or kinetic, and who will enter the game with varying degrees of experience. A tutorial cannot be all things to all people, but a lot of the time it’s not much to anyone. We can do better than that.

There is an adage in game design that players enjoy learning but not being taught. Some games get tutorials right by following this maxim. The undisputed pinnacle is “World 1-1” in 1985’s Super Mario Bros, which shows how expert environmental design can teach wordlessly. Players learn how Mario moves and jumps intuitively, while the designers employ “affordances”, cues that draw on players’ existing knowledge. So we run away from one guy because he has angry eyebrows and put the key in the lock because we know that’s where keys go. The reason Mario collects coins is because the developers needed to think of something that anyone would want to pick up off the ground — what else but money?

Titles such as Hollow Knight or Journey tend towards the “invisible tutorial” which follows the “show, don’t tell” school of thought, giving players the absolute minimum information needed to explore the world and letting them learn through experimentation. In Dark Souls and Spelunky, the primary method of learning is trial and error — die and try again.

The main reason tutorials are dull is that they are often a hastily designed afterthought. This appears finally to be changing as developers realise that players will be more motivated to learn when they feel invested in a game’s story and characters. Today’s games thread lessons throughout the story, only introducing mechanics when they become relevant rather than front-loading information before players have any reason to care. An ideal example of this approach is classic puzzle-shooter Portal: you could argue it has no tutorial, or that the entire game is a tutorial. Either way, it’s a masterclass in elegant design.

Other titles dare to be creative. In Horizon Zero Dawn, hero Aloy grows from child to adult as the player learns abilities. Fallout 3 gamifies childhood by showing the player character being born, taking their first steps and learning to shoot with a BB gun. These are excellent tutorials because they leave the player with the knowledge they need, excited to get into the game proper and with a sense that the game has respected their time and intelligence. We should applaud these games that have mastered the art of teaching, but the majority of the industry still has much to learn.