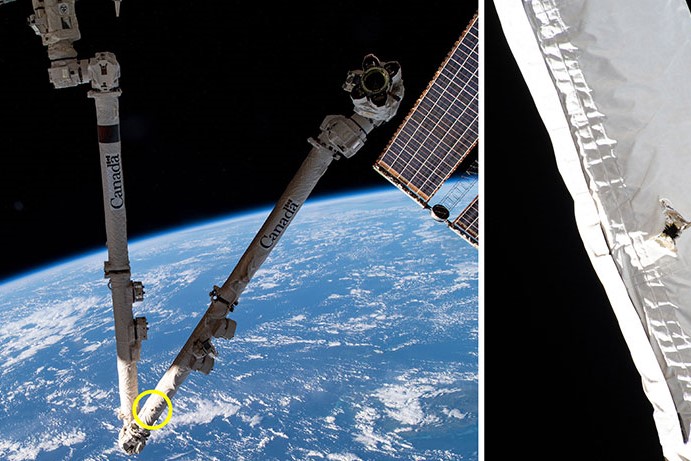 In 2007, a large weather satellite, Fengyun-1C, suddenly disintegrated as it orbited 863 kilometres above Earth. It was blasted by an anti-satellite weapon deployed by the Chinese military against one of their own defunct satellites. Destruction of the satellite scattered thousands of pieces of debris into space.

And there have been many other incidents that have spawned detritus.

In 1996, a French satellite was broken up by space debris. In 2009, an active Iridium communications satellite was hit by a defunct Soviet Cosmos satellite, creating a ribbon of wreckage stretching around the planet. There are an average of 12 collisions each year.

Space debris, or space junk, is yet another kind of litter we have created. But unlike litter on earth, it orbits the planet at speeds faster than 25,000 kilometres per hour, 10 times faster than a bullet. Risks from fragmentation debris increase all the time.

Near to Earth, space is a busy place. And it’s only getting more hectic.

Since the launch of the first satellite, Sputnik, in 1957, more than 12,000 satellites have been placed into Earth orbit. About 7,550 of those satellites were still in space in September 2021, according to the European Space Agency (ESA) Space Debris Office. Some 4,700 are still functioning. They are joined by more than 600 satellites every year.

Human remains are in also orbit, thanks to an American company that markets “space burials.” It costs $5,000 to launch ashes into Earth orbit, but only half that price to merely reach space and fall back to Earth. But launching ashes into deep space nearly doubles the price tag of an Earth orbit.

Space has always produced colossal statistics. But because 95% of all objects in orbit around Earth now are space debris, nations are taking action.

European and North American nations have agreed to bring down decommissioned satellites in a controlled descent, to burn up on re-entry, with fragments that survive crashing into the Pacific. Alternatively, satellites can be parked in a “satellite graveyard” orbit higher than any working spacecraft.

But some space-faring nations, including China, have not agreed to the protocols.

No money in cleaning up space

To clean up space and prevent hazards, pro-active techniques are being developed.

In 2018, a device called RemoveDebris, developed in the United Kingdom, was deployed from the International Space Station (ISS). RemoveDebris was allowed to drift away from the ISS for a month before its titanium harpoon and Kevlar net were successfully tested.

But there are complex legal issues before even a defunct satellite spinning wildly can be harpooned, as they remain sovereign or private property.

Viable solutions are needed. Launching rockets is very profitable, but so far there is no money in cleaning up space. And already certain orbits around earth are too dangerous. The Japanese Space Agency JAXA has estimated that 500 larger objects need to be removed from orbit, at least five large objects yearly.

The European Space Agency has contracted Swiss company ClearSpace-1. Planned for launch in 2025, ClearSpace will deploy a large claw that functions as a tow truck, according the Chief Engineer Muriel Richards.

“The object will be tumbling,” Richards said. “You manoeuvre to match the velocity of your object, slow down the tumbling and capture. Then you put yourself in a trajectory that comes back down into the atmosphere.”

The ISS, already scarred by space junk, is alerted when debris larger than a cricket ball or baseball is detected in its orbit, thanks to ground stations that track more than 23,000 objects. In 2020 alone, the ISS had to make emergency manoeuvres three times to avoid collisions.

But even tiny debris objects have a ballistic force. In a routine inspection in May this year, the ISS discovered a hole in its 17-meter long robotic arm Canadarm, which survived the impact.

When they spacewalk around the ISS, astronauts need to be vigilant and have a dose of good luck. Even a fleck of paint from a fragmented satellite can pierce an astronaut’s spacesuit.

The science fiction film “Gravity” illustrated what’s known as the Kessler Syndrome, a collision that creates a domino effect almost impossible to stop. It could generate enough space debris to knock out most functioning satellites and human space flight, and trigger a chain of catastrophic failures on Earth. The term comes from the former NASA scientist Donald Kessler, who first identified the issue.

As Kessler has pointed out, the issue of space debris is not unlike climate change: Unless current leaders deal with it, the situation will get worse for future generations. But Kessler is optimistic that young scientists will come up with solution.

RemoveDebris and Clear Space are only the start of what is, literally, a growth industry.