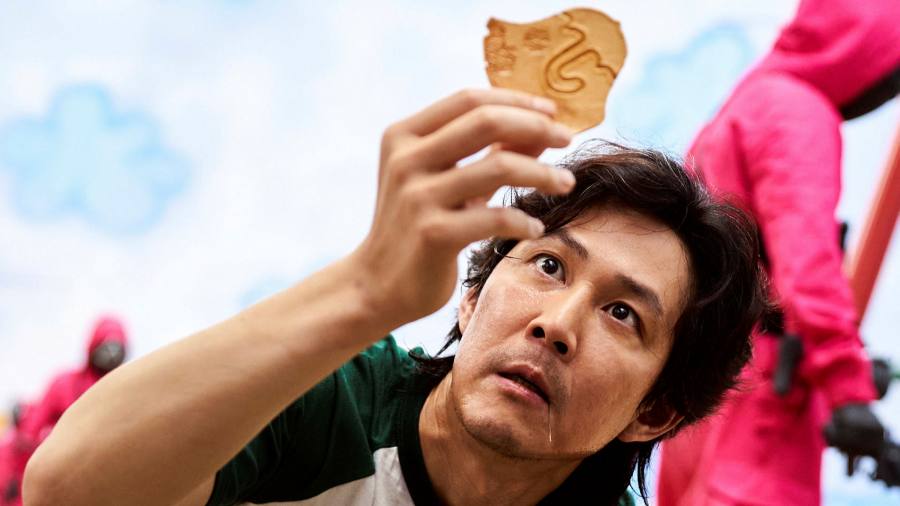 This article is an on-site version of The Lex Newsletter. Sign up here to get the complete newsletter sent straight to your inbox every Wednesday and Friday

Squid Game has become the first series to top charts in all 83 countries where Netflix streams. Ted Sarandos, co-chief executive of the US streaming business, says the dystopian South Korean drama may be its biggest show ever. The surge raises a broader question: should streaming groups pay a congestion charge for hit shows, rather as motorists do for driving on crowded streets?

Squid Game had the feelbad addictiveness of the movie Parasite and the zombie series Kingdom. These were also products of South Korea’s growing entertainment industry and featured heavy subtexts about disparities of wealth and power.

The new show features a desperate group of 456 indebted people, including a gambling addict, a fugitive banker and a North Korean refugee. They sign up to participate in a contest for a $38m jackpot by playing six children’s playground games. The losers die.

The series has meant a jackpot for Netflix and for local production companies. It has also pushed older, forgotten Korean dramas to the top of Netflix ranks. Growing demand for content is pushing up licensing fees. Local studios already boast fat production margins of about 40 per cent.

Squid Game has sparked a dispute over the burden that hit shows place on the internet. Local provider SK Broadband has started legal action against Netflix, in a rare showdown between a video-streaming platform and a broadband company.

Hits such as Squid Game and Kingdom have made Netflix the most successful streaming service in South Korea, where its earnings more than doubled in the year to 2020. August data show Netflix revenues rose 80 per cent as subscriptions increased almost two-thirds, according to industry data provider WiseApp.

On the flipside, that means traffic that Netflix generates on its network has increased 24-fold over the past three years, according to SK Broadband, increasing pressure for expensive network upgrades.

Local laws require content companies with more than 1m users and 1 per cent of total traffic to bear a share of the maintenance costs incurred by broadband providers. Netflix accounted for almost 5 per cent of daily internet traffic in the fourth quarter.

Netflix sees those fees as contrary to its stance on net neutrality. This would require internet service providers to treat all content on their networks equally. It has argued that SK Broadband is calling for double billing, with subscribers paying for an internet connection via their Netflix subscription as well as a direct fee. Last year, it took its own legal action against SK Broadband over charges.

SK Broadband argues Netflix has not been paying network usage fees it is due. Domestic streaming service companies as well as all companies, local and international, that use more than their bandwidth limit, including Amazon, Apple and Facebook, have been paying the fees.

In the US, Netflix pays broadband provider Comcast for faster speeds. It pays an access fee to US telecoms groups including Verizon and AT&T to ensure its videos are delivered smoothly.

The first round did not go well for Netflix. The district court ruled against the company. Its appeal against the ruling is coming up in December.

As it pushes for long-term studio contracts in South Korea, with about $500m earmarked for Korean content this year, expect disputes over network usage fees to become increasingly acrimonious.

For SK Broadband, wholly owned by the largest local mobile carrier SK Telecom, a legal ruling in its favour would mean a steady stream of fees from Netflix. SK Telecom’s gross margins have been dropping, down more than a quarter in the year to June from 98 per cent in 2018.

Shares of Netflix are up a tenth since the release of Squid Game. If it loses the latest lawsuit, it will have to pay an estimated $84m in network usage fees. The fine will barely leave a scratch, at less than 1 per cent of $25bn in sales it made last year.

But it would set a global example for similar disputes over net neutrality. One day, it could be the norm for broadband providers to levy charges on fast-growing video-streaming companies. The subscription costs of consumers would rise accordingly.

Due Diligence — Top stories from the world of corporate finance. Sign up here