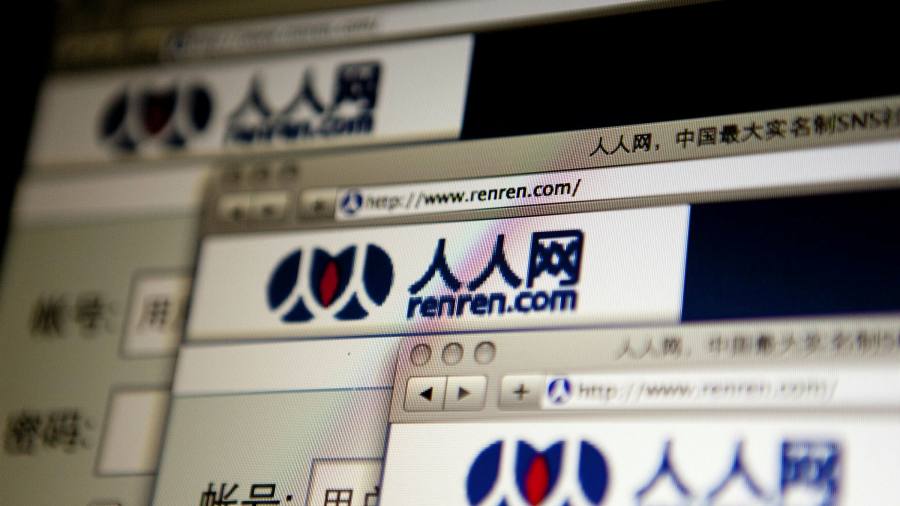 Renren, the once high-flying Chinese social network turned start-up investor, has settled with US shareholders for $300m over allegations of corporate misconduct.

Dissident investors had accused the company of steering its best assets, including a stake worth hundreds of millions of dollars in the digital lender SoFi, towards Renren insiders including SoftBank.

The settlement marks a rare victory in which shareholders of a US-listed, China-based company that had incorporated in the Cayman Islands were able to win compensation over corporate misconduct allegations.

“This is an extraordinary result by any measure. It is very rare to settle a case for more than the damages that we originally pleaded,” said William Reid IV, an attorney for the plaintiffs whose estimate of Renren’s liability was about $240m.

The shareholder lawsuit filed in New York state court was structured as a so-called derivative claim, in which investors sued the Renren directors for breach of fiduciary duty on behalf of the company. Renren agreed on Friday to pay $300m, less legal expenses, to ordinary shareholders. It denied any wrongdoing.

Its most prominent portfolio company, however, was a 13 per cent interest in SoFi, the internet lender. Renren had invested $240m in SoFi, the private market value of which exceeded $4bn by March 2017.

Renren shareholders were given what the plaintiffs described as a “Hobson’s choice”, where they could either buy into OPI or otherwise receive a special dividend payment from Renren. However, only large investors were eligible to buy into OPI, with virtually all retail investors, many of which were also Chinese, shut out.

The shareholders who filed the suit argued that the $500m pegged to OPI was “several hundred million dollars” short of fair value, according to the lawsuit, in order to benefit the likes of Chen, SoftBank and venture capital group DCM which themselves had purchased interests in OPI.

Minority shareholders owned roughly a third of Renren’s shares, giving them a proportionate claim on OPI. Renren had carried the total value of its investment portfolio at a value of $695m, which valued its SoFi holdings below its original cost even as its private market valuation soared.

“These companies were acting with impunity if not diplomatic immunity in US capital markets and that needed to change,” said Peter Halesworth, a Renren shareholder who owned shares for years before the OPI spin-off. He launched litigation in 2018 with Hong Kong-based Oasis Investment, seeking an increased payout.

Since 2010, a total of 239 Chinese companies have listed on Nasdaq and the New York Stock Exchange, raising more than $100bn. And while US investors got access to high-growth companies, Chinese groups would become a favourite target of US shareholders alleging financial fraud or self-dealing by management.

According to research from advisory group Duff & Phelps, 70 per cent of Chinese companies that had gone public in the US chose Cayman Island incorporations. In the Caribbean nation, shareholder litigation tended to be difficult to pursue in part because law firms were denied the ability to be paid fees that were contingent on settlements or judgments.

Renren had originally listed its shares on the NYSE in 2011, raising nearly $800m as part of a bid to become the “Facebook of China”. The New York court had previously accepted the plaintiffs’ arguments that the wrongdoing claims could be properly decided in the US due to Renren’s activities in America.

Renren’s stock price surged 45 per cent on Friday, reaching a market capitalisation of $576m as shareholders anticipated their payout of the settlement proceeds. SoFi went public in 2021 and now has a $12bn equity value.

The $300m is to be paid by OPI and Chen, according to court filings.

Renren and its lawyers did not respond to a request for comment.