Samsung has certified the Chinese variants of the Galaxy S22 smartphones at 3C, and the listings reveal none of them will support more than 25W wired fast charging. That is correct – none of them will get the 45W standard, not even the S22 Ultra, despite what earlier rumors suggests.

A possible explanation could be that this only applies to the Qualcomm-powered units – the S22 Ultra with Exynos 2200 and custom-made GPU by AMD will be the only one with the fast speeds, but it is not going to arrive in China, so it wasn’t part of the certification application. 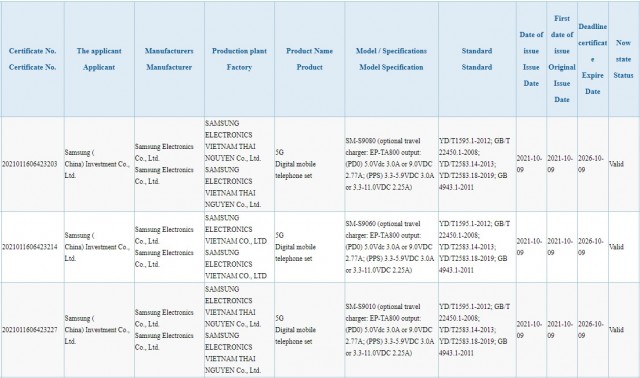 The SM-S9010, SM-S9060 and SM-S9080 are respectively the Galaxy S22, Galaxy S22+, and the Galaxy S22 Ultra, with the last character being a 0 means these are units, designated for the Chinese market. All of them will use the Samsung EP-TA800 25W adapter that has been part of the Samsung portfolio since the introduction of the Galaxy Note10 in August 2019.

If Samsung sticks with 25W charging for yet another generation it risks falling way behind Android competitors, which are normally offering twice to three times the charging speeds and some even go as high as 125W.