PC sales are still on the rise according to the latest Canalys report which saw a 5% increase in shipments for the July-September period. Combined shipments for desktops and notebook PCs totaled 84.1 million units which is 4.9% more than the combined 80.2 million figure seen in Q3 2020. 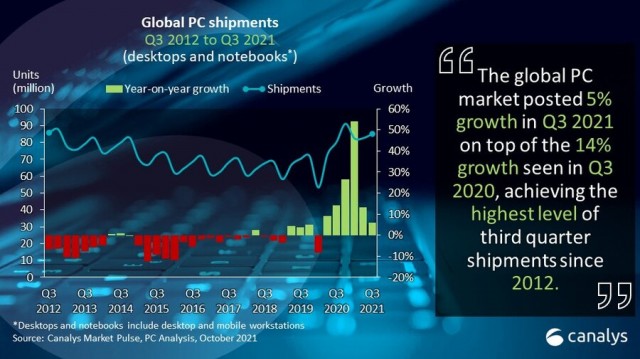 On the per-region basis, South America experienced the highest annual growth in terms of shipments at 17% followed by Europe, Middle East and Africa’s (EMEA) 16% and Asia Pacific’s 13% though without taking Japan into account which had a 30% decline in PC shipments. Shipments in North America also saw a decline though much less harsh at 9%.

Looking ahead, Canalys Research Director Rushabh Doshi sees new opportunities for the PC market with small and midsize businesses (SMBs) in the tourism and travel industries. However, supply chain issues and the ongoing chipset shortage is likely to affect PC vendors as they battle to adjust their strategies for different markets.