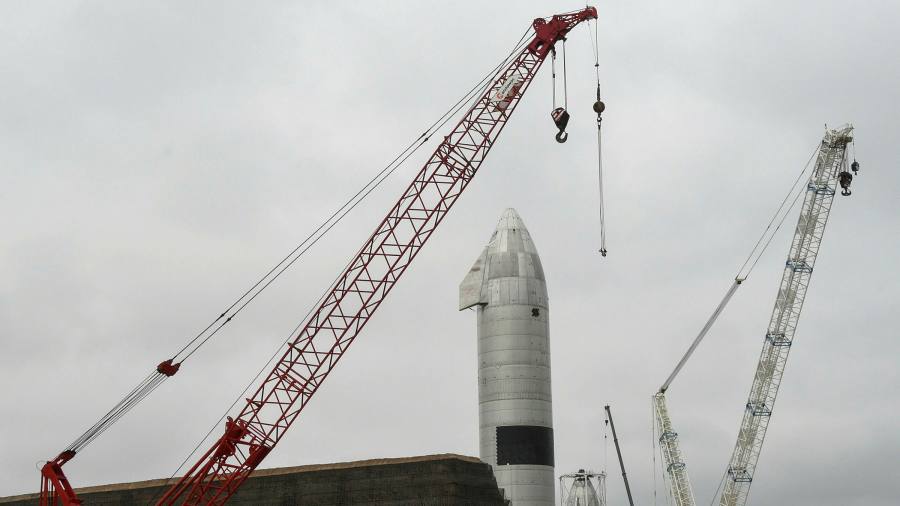 William Shatner, who played Captain Kirk in Star Trek, will have to wait another day to boldly go into space, due to high winds in West Texas delaying the launch of the latest mission of Jeff Bezos’s Blue Origin till Wednesday.

Seven hundred miles away at the state’s southern tip, a gleaming stainless steel rocket has been rising from the salt marshes that threatens to eclipse the ambitions of Amazon’s founder, and other players in the space industry.

In today’s Big Read, Richard Waters reports that while the Starship being built by Elon Musk’s SpaceX is aimed at Mars, its size could mean payloads can be deployed in the Earth’s orbit at a cost that would change the economics of space logistics.

The Starship has 33 engines and is 122m tall compared to the 70m of SpaceX’s current workhorse, the Falcon 9. It has the power to carry as much as 100 tons into low orbit.

“It’s game over for the existing launch companies,” says Peter Diamandis, a US space entrepreneur. “There’s no vehicle out there on the drawing board that could compete.”

The Falcon 9 has already brought the price for customers willing to share a launch with others down to $5,000 per kilogramme, around a third of what it was before, says Edison Yu, an analyst at Deutsche Bank. That price could fall to $1,000, and perhaps even as low as $500, once Starship becomes fully operational, he predicts. Read more

1. Coinbase to launch NFT marketplace
Coinbase plans to launch a marketplace for non-fungible tokens (NFTs) as the largest US exchange for trading crypto assets joins the boom in digital collectibles. The exchange, which listed in New York earlier this year and has recently faced heightened scrutiny from regulators, announced that Coinbase NFT would let users create, buy or sell the increasingly popular digital tokens, that represent artworks or other collectibles.

2. Macron unveils five-year tech plan
French president Emmanuel Macron has outlined a five-year, €30bn investment plan to boost the country’s high-tech industries and reduce dependence on electronic components such as microchips. Macron said of the “France 2030” plan: “If we don’t reindustrialise the country, we cannot again become a nation of innovation and research.”

3. A global AI bill of rights is desperately needed
The Bill of Artificial Intelligence Rights being proposed by the White House’s science advisers could ensure a person’s right to know if and how AI is making decisions about them, writes Anjana Ahuja. It could enshrine freedom from algorithms that replicate biases and the right to challenge unfair AI decisions, emulating the US Bill of Rights adopted in 1791. However, a global bill is also needed, she says.

4. Blackstone buys into music rights
Blackstone has taken a big step into the world of music rights as valuations boom, announcing a tie-up with Hipgnosis Song Management. The private equity group will put $1bn into a new fund run by HSM that will buy music rights, catalogues and royalties, as PE doubles down on music, with a surge in streaming having increased the value of older songs.

5. French cloud company to take on US tech giants
The cloud computing company OVHcloud, founded in 1999 in the industrial city of Roubaix in northern France, will start trading on the Paris stock exchange this week. Leila Abboud, who has interviewed the company’s founder Octave Klaba, says the IPO will be a key moment for France’s tech ecosystem, which is steadily creating more billion-dollar start-ups, yet has seen few public listings in the French capital.

Dutch e-bike brand VanMoof today unveiled its entry into the high-speed bike category. The VanMoof V will be capable of 50kph/31mph and features two-wheel drive, front and rear suspension, thicker tyres and a new frame design. Like VanMoof’s current e-bikes, it also has Turbo Boost, Kick Lock for keyless locking, automatic gear shifting and Theft Defense. The bike is still in the engineering stage, but will cost around £3,500 and you can reserve one now for delivery expected around the end of 2022.