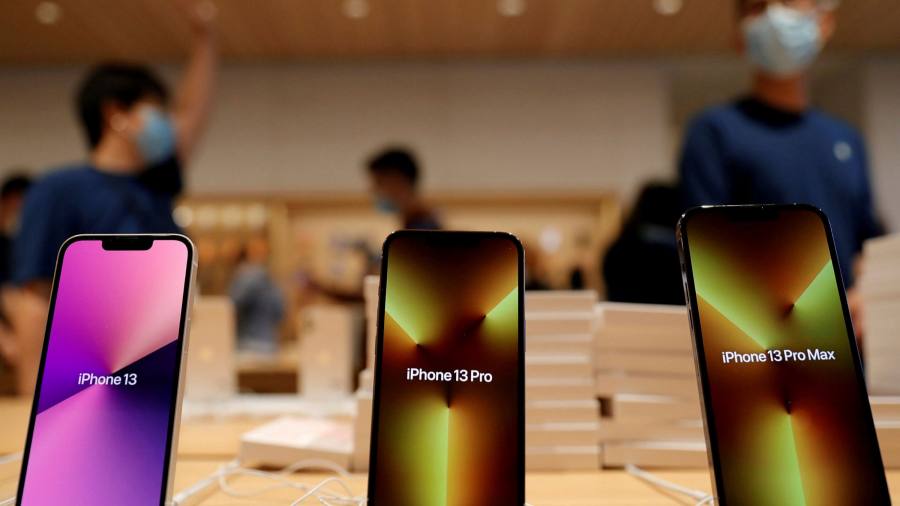 Hi, Kenji from Tokyo this week, now under Covid-19 home quarantine. We have another scoop on Apple from Nikkei Asia for our Big Story. A Chinese state-owned company has become a supplier of displays for the latest flagship iPhone. This exemplifies how far China has come in its tech capabilities, including artificial intelligence, as the Pentagon’s ex-chief software officer warned (Mercedes’ top 10). Meanwhile, China is building up and diversifying its sources of strategic mineral resources including lithium, a crucial ingredient for its world-leading electric vehicle industry (Our take, Smart data and Spotlight). Take care until next week!

Join the FT’s Asia Insurance Summit on October 28 and discuss how accelerated digitalisation is affecting the industry.

A Chinese company has clinched a coveted role supplying displays for Apple’s latest flagship iPhone, according to this exclusive in Nikkei Asia.

The breakthrough for BOE Technology represents a big boost to Beijing’s technology ambitions — and throws down a challenge to the likes of Samsung Display and LG Display.

“It is in the process of final testing, but based on the results of earlier samples, BOE should have no problem passing the tests,” an executive-level source told Nikkei Asia. “The foundation of the collaboration between Apple and BOE is based on their previous project on the iPhone 12, and both Apple and BOE want this to happen soon.”

BOE will initially split orders for the 6.1-inch iPhone 13 displays with Samsung Display, with the Chinese company accounting for up to 20 per cent of the total, sources said. Under the most optimistic scenario, BOE aims to grab 40 per cent of orders for the model from the South Korean display giant, the people added.

Upshot: Beijing has been pushing to upgrade China’s manufacturing capability and has positioned BOE as a future challenger to Samsung Display and LG Display, which have dominated the supply of OLEDs to iPhones since 2017.

The lustre of lithium — referred to as “white gold” — is as alluring as ever, as demand for electric vehicles surges. China, the largest consumer of this crucial ingredient for electric vehicle batteries, has set its sights on the “Lithium Triangle”, a region spanning the border areas of Argentina, Bolivia, and Chile, to expand its supplies.

Zijin Mining Group, a leading gold and copper producer, has announced it is acquiring a full stake in Toronto-listed Neo Lithium, the owner of a lithium brine lake project in north-western Argentina. The Chinese state-owned enterprise offered C$960m ($768m) for an expected annual yield of 18,000 tonnes of battery-grade lithium carbonate over the mine’s 35-year lifespan.

Turning to Chile, Tianqi Lithium invested $4.1bn in 2018 in SQM, the country’s largest lithium miner, to become its second-biggest shareholder.

Ryan C Berg, a senior fellow at the Center for Strategic and International Studies, has been raising the alarm over China’s incursion into South America’s lithium-rich countries, traditionally deemed a “backyard” of US influence.

“Not only has China increased its investment in the Lithium Triangle countries, but it has also strengthened its bilateral relationships through its vaccine diplomacy,” Berg warned in a paper. “As China furthers its influence in the Lithium Triangle countries through increased investment, but also through its aggressive vaccine diplomacy, it will likely continue its dominance of the emerging lithium industry.” He exhorts Washington to take countermeasures, but for now, Beijing seems to be moving ahead.

These charts elaborate on some of the themes Kenji explored in this week’s Our take, above. They are also relevant to the FT Big Read that forms the basis of this week’s Spotlight, below.

Note the bullish long-term outlook for battery-powered vehicles and the expectations surrounding lithium, as shown in the share price of Neo Lithium. This Lex analysis goes into greater detail.

A few pertinent facts: new energy vehicle sales, both battery-powered and plug-in hybrids, rose 150 per cent last month from a year earlier. This happened as overall auto sales fell by a fifth. Neo Lithium owns and mines some of the biggest lithium deposits in the world.

For more than a decade, Chinese carmakers have tried to export their vehicles outside the country, with limited success. Wang Chuanfu, the founder of Chinese electric vehicle maker BYD, has gone further than most.

BYD is now the world’s second-largest producer of electric buses and the fourth-largest maker of electric vehicles. This summer, it shipped its red Tang sport utility vehicles to Norway, the country which has seen the quickest uptake of battery-powered cars.

Wang has been critical to its success. Warren Buffett is one of the biggest backers of the company after spotting Wang’s potential a decade ago. Buffett’s right-hand man, Charlie Munger, described the Chinese businessman as a mix between Thomas Edison and former General Electric chair Jack Welch. Wang once publicly drank battery fluid to prove how safe it was.

BYD has said it is preparing to build a battery factory in Europe to “provide supporting facilities for European auto customers” as part of its global expansion drive. But its potential to compete against revolutionary and disruptive companies such as Tesla remains to be seen.