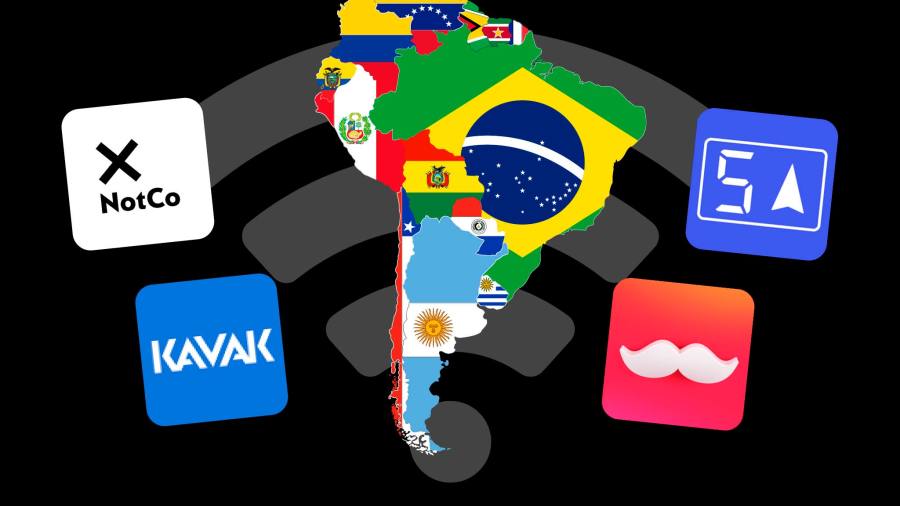 Buying a used car, renting an apartment or opening a bank account: all recurring nightmares in Latin America, because of reams of paperwork, lethargic bureaucracy and legal pitfalls.

Start-ups created to tackle problems like these are propelling the region to the forefront of the emerging market tech boom. Last year $4.1bn of venture capital investment flowed into Latin America, exceeding south-east Asia’s $3.3bn and beating Africa, the Middle East and central and eastern Europe combined, according to the Global Private Capital Association.

In the first half of this year, Latin America pulled in $6.5bn of venture capital, not far short of India’s $8.3bn.

“We started in this industry in 1999 when there was hardly any internet, almost all the connections were dial-up and internet penetration was 3 per cent,” said Hernán Kazah, co-founder of Kazhek Ventures, Latin America’s largest early-stage fund with more than $2bn of capital raised to date. “Today, Latin America finally has critical mass in almost every market.”

Nubank exemplifies the new breed of Latin American start-up. Co-founded in 2013 by Colombian entrepreneur David Vélez after it took him six months to open a bank account when he moved to São Paulo, it has grown exponentially and now has more customers than any other standalone digital bank in the world.

A forthcoming IPO could value the Brazilian fintech at more than $50bn, according to recent reports. That compares with the $79bn value of Mercado Libre, the region’s answer to Amazon and Latin America’s most valuable company, founded in 1999 in a first wave of tech activity.

The latest crop of Latin American start-ups has attracted the attention of some of the tech world’s deepest-pocketed investors. Marcelo Claure, the Bolivia-born chief operating officer of SoftBank, announced last month a second dedicated Latin America tech fund, committing $3bn on top of $5bn allocated to the first fund in 2019.

“We’ve been incredibly surprised by the quality and quantity of great companies that were capital starved, so we started making investments,” Claure told the Financial Times. “There is so much room to improve people’s lives in LatAm, because all systems are inefficient and plagued by bureaucracy . . . huge opportunities for tech to disrupt.”

Mexico’s first unicorn, Kavak, is one such disrupter. Valued at $8.7bn in a funding round last month, the company aims to improve the often hazardous experience of buying a used car. It offers buyers a mechanical check, a three-month guarantee, rapid online credit and home delivery.

Brazil-based Quinto Andar is simplifying the challenge of renting a flat by cutting out brokers and offering its own insurance to vetted tenants, eliminating the need for huge deposits, guarantors or costly insurance.

Chilean start-up NotCo has deployed innovative AI to develop unusual combinations of plants to mimic the taste and texture of milk, mayonnaise, ice cream and meat. Valued at $1.5bn in a funding round in July, NotCo has now expanded into the US and Canada.

Kavak, Quinto Andar and Nubank highlight how Latin America’s most successful start-ups are dedicated to tackling the problems of the region.

“This story of bringing over Silicon Valley and trying to tropicalise it didn’t work,” said Ivonne Cuello, former chief executive of the region’s private capital association LAVCA. “The role models which started to be successful were the ones which said: ‘There are structural problems in the region which can be solved by new enterprises . . . designed exclusively for the needs of the region’.”

Kazhek’s Kazah said that Latin America’s innovators were now inspiring envy. “You see companies outside the region saying ‘I want to be the Nubank of Germany’. That did not use to happen.”

Financial services have dominated Latin America’s start-up scene, with about 40 per cent of the private funding to last year going to fintechs, according to LAVCA data.

Before the pandemic, more than half of the region’s citizens did not use a bank. In just a few months from May to September last year, 40m people opened a bank account, according to research from Mastercard.

Fintech start-ups like Nubank and Argentina’s Ualá played a key role in facilitating the expansion. In Brazil, the central bank has launched Pix, a fast money transfer system over mobile phones which has 110m registered users.

“You have some of the world’s most profitable banks sitting in Brazil and Mexico so it’s an obvious first hit,” said SoftBank’s Claure. “These banks are highly inefficient, lots of branches, long queues and all that . . . so we started with fintech.”

As in other regions, the pandemic has accelerated digital change. Latin America has some of the world’s highest per capita coronavirus death rates and some of its worst recessions, but Covid-19 also forced much more economic activity online.

“For many years, Latin America, a region which is large as a percentage of global GDP because these are middle-income countries, had been underinvested in technology,” said Pierpaolo Barbieri, who founded Ualá in 2017. “What we’re seeing now is a general catch-up where everyone is rushing to see what the opportunities are.”

In some areas, the region is still trailing. “Seventy per cent of commerce in China is done online, almost 50 per cent in the United States and . . . it’s still 20 per cent in Latin America, so the process of economic digitisation still has a long way to go,” Barbieri added.

Julio Vasconcellos, co-founder of Atlantico, a Latin American venture capital fund, has compared the total market capitalisation of tech companies in the region as a proportion of GDP with the same ratio in Asia.

“When you look at the evolution of the US market, the evolution of the Chinese market and now Latin America, the curve tends to look very similar over time,” he said. “It’s slow and gradual until it eventually hits an inflection point and it really starts to accelerate.

“Latin America is going through this inflection point roughly 10 years after the US and around seven to eight years after China.”

Latin America’s total tech market capitalisation stands at 3.4 per cent of GDP, he said, compared to 30 per cent in China and 14 per cent in India. Were Latin America to reach Chinese levels of tech participation in the economy “we’re talking about the equivalent of over a trillion dollars of market value being created”.

How long that could take is unclear. Francisco Alvarez-Demalde, co-founder of US-based Riverwood Capital, has been investing in Latin American tech since 2008. While he agrees that the region is experiencing “a lot of excitement” and that revenue growth in the tech sector is likely to be strong, he notes that funding ebbs and flows.

“There’s a significant increase in capital availability in the region, which accelerated in the past few years at a very rapid pace,” he said. “Where we are in the cycle is difficult to say [ . . .] we should be ready for volatility on that front.”

The region faces other challenges. As a major exporter of commodities, it is prone to economic booms and busts and its politics are volatile. An electoral cycle currently under way is throwing up a wave of anti-establishment candidates and demands for greater state intervention in the economy.

There are practical problems, too. Except in Brazil, software engineers are in short supply and universities are not producing enough tech-literate graduates. Fixed broadband connections are lacking in many areas.

SoftBank’s Claure, meanwhile, is comfortable increasing his tech bets. “Today the Latin American fund has over 100 per cent IRR [internal rate of return] in local currency and it’s probably the best-performing fund that we have today from an IRR perspective.”

Nubank has a claim to be the greatest success story of Brazil’s start-up scene. Since launching a credit card with no annual fees in 2014, the fintech has amassed more than 40m customers across its homeland, Mexico and Colombia.

A funding round this year gave the unicorn a valuation of $30bn and it is now eyeing an initial public offering in the US. With a focus on technology and customer service, the São Paulo-headquartered group has challenged a Brazilian banking industry notorious for high charges and bureaucracy.

The online used-car platform Kavak was founded in Mexico in 2016 by Venezuelan entrepreneurs. The company recently raised $700m in a funding round that valued it at $8.7bn, one of the highest in Latin America. Investors include General Catalyst, SoftBank and others.

Clients can either buy or sell their used cars on the site, with the company acting as an intermediary and carrying out inspections of the vehicles as well as offering financing, guarantees and home delivery. The company now operates in Brazil and Argentina and has its sights on further expansion.

Rappi is Colombia’s outstanding start-up success. Local entrepreneurs started the company in 2015 to deliver groceries but it has since branched out into areas such as financial services. Having expanded into nine countries and more than 200 cities, it aims to become the “superapp” of Latin America.

Among Rappi’s innovations is the Turbo Fresh service, which aims to deliver the most requested products to customers within 10 minutes, using sophisticated “last kilometre” logistics. The company’s name is a word play on “rápido”, the Spanish word for “fast”.