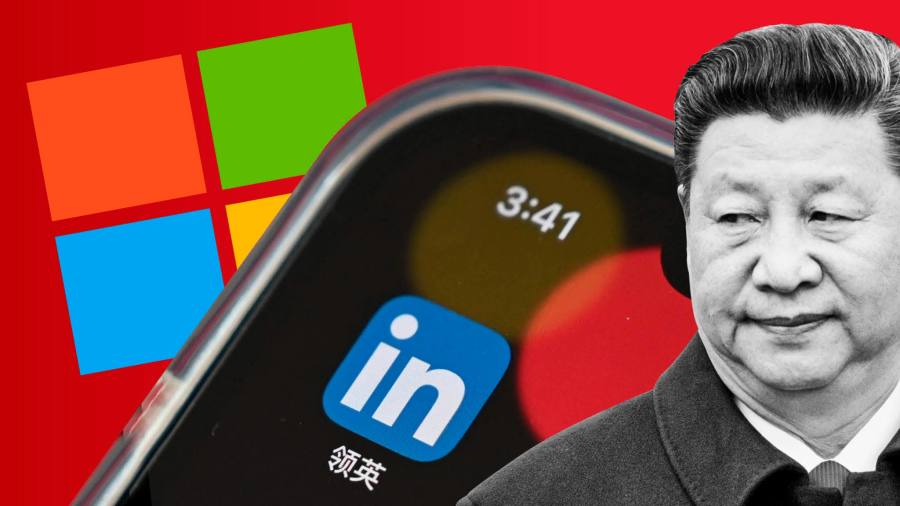 As 54m Chinese LinkedIn users woke up on Friday wondering about the future of the professional networking site, Lu Jian was busy trying to put a positive spin on what looked like a full-scale retreat.

Lu, a veteran of China’s tech industry who took over as LinkedIn’s China head in 2018, has spent the past few months trying to balance the increasing censorship requests made by Beijing against the global opprobrium for caving in.

On Thursday, LinkedIn’s US headquarters appeared to throw in the towel, issuing a short statement, at night-time in China.

Blaming a “significantly more challenging operating environment” and “greater compliance requirements in China”, LinkedIn said it would switch off its global site in China and instead create a simple jobs listings board for Chinese users, stripped of all other content.

But on Friday, Lu played down the capitulation by the last major western social network left in China, and insisted that Chinese users would not be cut off from the rest of the world.

“The reports of my death are greatly exaggerated,” he wrote on his personal social media account, as the company’s local team took to the internet to “dispute the rumours” of its shutdown.

In a public letter, he added that LinkedIn had decided to make “strategic adjustments” and create new products, but said it would “fully use its international platform” to help users and recruiters find each other and continue to help Chinese companies “connect with global business opportunities”.

He added: “LinkedIn won’t cut its investment in China, it will increase it. We won’t cut employees and we definitely won’t leave the country.”

Chinese internet users were quick to compare the Chinese and English press statements, posting photos of them side by side. “Which statement should I believe?” asked one user on Twitter-like Weibo. By mid-day Friday, Weibo had begun to censor the English statement.

LinkedIn pushed into China seven years ago to great fanfare and high hopes that its well-connected local partners and willingness to play by Beijing’s rules would let it add hundreds of millions of users.

The Microsoft-owned business has since become essential to the country’s white-collar workers. “Premium people are on LinkedIn, I don’t think I can live without [It],” said one venture capital investor in Beijing, who admitted checking the social network multiple times a day. “Headhunters are there, my peers are there, and even deal sourcing, it’s essential.”

But the demands from the local censors’ office have increased steadily, especially as LinkedIn evolved from primarily a professional jobs site into more of a fully-fledged social network, full of blog posts by its users.

Eileen Donahoe at the Stanford Global Digital Policy Incubator said Microsoft had been unprepared for the increasing requests for censorship. “They were a bit too idealistic about how they could operate in China . . . They didn’t anticipate this service would lead them into conflict with their [human rights] values,” she said.

“They just didn’t anticipate they would be front and centre in this debate,” she said. “Had they not done this, there’s no question it would have hurt their brand and image outside China.”

That led journalists in recent months to report their profiles were being censored in China. Some China-focused academics and researchers also learned they too had been made invisible to their contacts in the country.

“When LinkedIn came to China they said they would adhere to the local rules, but it appears to have been too difficult for them to continue doing so,” said Mark Natkin, head of market research firm Marbridge Consulting.

“Multinationals always face the risk that what Beijing asks of them will put them in the crosshairs for criticism in their home country,” he said.

The Biden administration welcomed LinkedIn’s move to scale back and accused Beijing of forcing companies to be “complicit in its repression and authoritarian practices”.

“It appears that the move was spurred by cost benefit calculus of increasing reputational risks and revenue challenges,” said Paul Triolo, head of tech policy analysis at consultancy Eurasia Group.

“This has been coupled with an increasingly challenging regulatory environment around both data security and the use of AI algorithms, both exposing LinkedIn’s business operations to further risks.”

LinkedIn’s growth in the country has been steady but slow. Even after its entry, most Chinese continued to do most of their business networking on Tencent’s WeChat, while more agile rivals such as MaiMai have sprouted up to recreate LinkedIn’s business community in a more social heavy form.

LinkedIn has 54m users in China, up from 51m last year. The company has added about 40 employees at its offices in Beijing and Shanghai over the past four years bringing total headcount to roughly 260, according to Chinese business records.

For many of those users, LinkedIn is the place to connect with colleagues and companies outside the country, and the more China-centric platform outlined by headquarters may lack that draw.

The bifurcation of LinkedIn matches the path taken by ByteDance, which created two separate apps, TikTok and Douyin, for global and Chinese users. Anyone in China wishing to access TikTok now has to not only use a virtual private network (VPN) but also remove their mobile phone’s sim card.