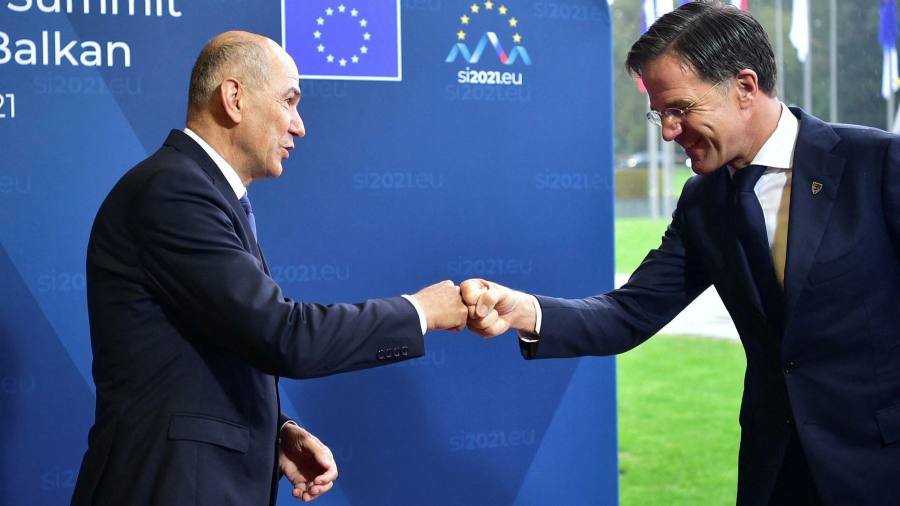 It’s not often that EU prime ministers trade barbs on Twitter, but yesterday Dutch prime minister Mark Rutte openly criticised Slovenia’s Janez Jansa (whose country still chairs the rotating EU presidency until the end of December) for making disparaging comments about EU lawmakers who visited Ljubljana and expressed concerns about the rule of law and freedom of the press.

Jansa, who’s expressed controversial views on social media before (he congratulated Donald Trump for his US re-election last year, before the official results were called), retorted by implying that freedom of the press is more at risk in the Netherlands than in Slovenia after a journalist was shot in Amsterdam. Jansa also criticised the European Parliament for conducting “political intrigues and senseless accusations of Slovenia”.

Well, Mark, @MinPres, don’t waste time with ambassadors and media freedom in Slovenia. Together with @SophieintVeld, protect your journalists from being killed on the streets. https://t.co/EPvDP7Jlfk

The row has the potential to escalate at next week’s European Council, prompting its chief, Charles Michel, to call Rutte and Jansa last night. Michel tweeted afterwards that “mutual respect” towards MEPs and among fellow EU leaders “is the only way forward”. A task that may prove harder to enforce than tweet about.

Members of the @Europarl_EN should be able to do their work free from any form of pressure.

Mutual respect between EU institutions and within the European Council is the only way forward.

Twitter spats aside, our main story today looks at next week’s first step towards a possible overhaul of the Stability and Growth Pact in the post-pandemic era.

With UK Brexit minister Lord David Frost in town today, we also look at the negotiation quagmire the EU desperately wants to extract itself from, only to be sucked into once again.

And in artificial intelligence news, we’re exploring why the potential use of AI by the bloc’s law enforcement agency has attracted fresh criticism.

This article is an onsite version of our Europe Express newsletter. Sign up here to get the newsletter sent straight to your inbox every weekday morning

The EU will formally kick off next week the latest instalment of its long-running debate over how to reform its budgetary rules, as it publishes a consultation paper paving the way towards potential reforms of the Stability and Growth Pact, writes Sam Fleming in Brussels.

Among the key goals underlying the upcoming discussions is ensuring the EU does not repeat the mistakes of the financial crisis, when premature budget cuts curbed Europe’s rebound compared with other big economies including the US.

In addition, some policymakers are anxious to find ways of better incentivising public investment in priority areas including green spending and the digital economy — while finding a way to rebuild public finances following Covid-19-induced public debt blowouts.

The discussions will again expose the deep gulfs between member states over how strict the EU’s budget rules should be, and how aggressively debt mountains should be pared back. But while those divisions remain as real as ever, it is also worth reflecting on how far the debate has come since the last economic crash.

The IMF’s latest economic outlook lays out the picture clearly. As Vitor Gaspar, head of fiscal policy at the IMF, said this week, “fiscal policy proved its power” during the current crisis.

Big economies with access to cheap funding were able to roll out massive spending and public support programmes. Their public spending power also boosted mass vaccination drives that enabled rapid reopenings in major economies. As a consequence the IMF predicts 5.2 per cent economic growth among advanced economies this year, following a 4.5 per cent contraction in 2020).

Looking ahead, blockbuster stimulus packages unveiled by the US and the EU are set to play a surprisingly important role in the global growth outlook, the IMF’s latest Fiscal Monitor shows. It weighs up the impact of the American Families Plan and American Jobs Plan in the US, and the European Commission’s Next Generation EU recovery plan.

While the €800bn EU plan has legislative backing, the fate of large sections of the US package will depend on political machinations on Capitol Hill. But the two programmes, if fully enacted, would deliver a $4.6tn real-terms boost to global GDP by 2026, according to the IMF. Positive economic spillovers to other countries represent more than 16 per cent of that extra output.

Countries with deeper commercial ties to the US and EU will experience the most significant benefits, the IMF says. For example, the fund says the cumulative increase in real GDP in Canada and the UK would be about 5.2 per cent and 1.8 per cent respectively.

The flipside of this is a much more depressing message — namely the deep split between the fortunes of advanced economies and developing markets.

Output for the advanced economy group is tipped to regain its pre-pandemic trend path in 2022 and exceed it by 0.9 per cent in 2024, according to the IMF’s World Economic Outlook. By contrast, output for the emerging markets group (excluding China) will stay 5.5 per cent below the pre-pandemic forecast in 2024.

Public policy is again a key reason for the divergence. Advanced nations have been able to build more generous fiscal support packages on the back of low borrowing costs. In addition, vaccine rollouts in deep-pocketed rich economies have been far more expansive than in emerging and developing countries — where access remains extremely limited.

The EU’s energy pricing system is at the heart of complaints from some member countries. It operates on a common “pay as you clear” model where wholesale electricity costs reflect the price of the last unit of energy bought via auctions held in member states — generally gas, even in pro-nuclear countries such as France. (More here)

Yet another round of Brexit talks begins today in Brussels when Lord David Frost, UK Brexit minister, sits down for lunch with Maros Sefcovic, the commission vice-president handling UK relations, writes Andy Bounds in Brussels.

The commission and member states believed, to paraphrase UK PM Boris Johnson, that “Brexit was done” with the deal sealed last year. But the UK wants to rehash the settlement over the thorny question of trade between Great Britain, which left the single market, and Northern Ireland, which stayed in.

Sefcovic admits the Northern Ireland protocol, which created an Irish Sea border to prevent one on the island of Ireland itself, has caused disruption. He is also aware that the loyalist community is sensitive to threats to ties with the UK. Riots occurred earlier this year.

Hence his proposals on Wednesday to cut checks substantially. But Sefcovic’s — and the EU’s — patience could run out by the end of the year, his deadline for a deal. The UK government welcomed his proposals but added last night that “there is still a substantial gap between our two positions”.

The Slovak commissioner is too diplomatic to moan, telling the FT in an interview that talks are in the “home stretch”. “We are tilting the focus of the discussion back to a constructive path,” he said.

But some countries are less diplomatic. “The EU member states’ patience is not infinite. It will reach a point where they will just have had enough,” was a typical comment from one official.

Others have already tired of the Brits. Crises with Poland, Hungary, energy supplies and migration are just a few of the topics filling inboxes. Asked where Brexit was on the priority list, one diplomat replied “10 or 11”.

Some believe that even after a deal on the protocol the British will demand to reopen other agreements. “For us, you finish negotiations and move on to other things, for them it’s always the beginning of new negotiations,” said one EU official.

The potential use of artificial intelligence by Europol, the EU’s law enforcement agency, has come under criticism by privacy advocates and human rights defenders, writes Javier Espinoza in Brussels.

Europol has for a long time asked to be able to use this technology, which it says will help catch terrorists and other criminals.

This week, the European parliament’s committee on civil liberties, justice and home affairs voted in favour of Europol being able to process massive amounts of data using artificial intelligence. MEPs are likely to confirm its new powers in a plenary vote scheduled for next week.

The move has prompted activists to raise concerns that the agency may misuse the technology and escape scrutiny, pointing to Europol’s patchy record when it comes to handling data.

Last October, the European Data Protection Supervisor warned it was highly likely Europol “continually processes personal data on individuals for whom it is not allowed to do so”.

Europol spokesman Jan Op Gen Oorth said any future deployment of AI will make sifting through data collected by member states much easier, but that it will only be done in consultation with the bloc’s data protection authorities “to ensure appropriate levels of data protection as a fundamental right of EU citizens”.

“Europol is respecting the democratic process and is looking forward to its outcome,” the spokesman added.

The use of AI by police is highly contested. In the US, for instance, there have been multiple reported incidents of wrongful arrests because of incorrect facial recognition matches, in many cases involving people of colour.

The UK police has faced legal challenges for alleged human rights violations. Activists in the country worry about a legal vacuum because the laws relating to the use of technologies such as artificial intelligence have not been updated for nearly a decade.

In the European parliament, dissenting voices are also raising concerns, even as pro-law enforcement MEPs are likely to carry the day.

“The vote next week will legitimise Europol’s current activities which are not always legal when it comes to respecting data protection and privacy,” said Saskia Bricmont, a Belgian Green MEP who vehemently opposes the plans.

She said the agency’s patchy record and glitches in the technology were a bad mix. “This is problematic because there is a lack of efficiency in the AI tools and they are not 100 per cent giving us the truth,” Bricmont said.

Activists worry the processing of this information may lead to wrongly accusing innocent individuals. “The fundamental risk is the impact that this may have on fairness of proceedings and the integrity of the justice system,” said Laure Baudrihaye-Gerard, European legal director at Fair Trials, an advocacy group in Brussels.

“There’s a huge gap with potential for mistakes,” she added.

Britain after Brexit — As businesses get used to a new labour market, a rapidly evolving regulatory landscape, the new-look “Britain after Brexit” briefing will be with you every step of the way, engaging with the gristle and sinew of this fast-changing world. Sign up here.

The Road to Recovery — Our must-read briefing on business and the economy, post-pandemic. Delivered three times a week, it contains expert analysis on the changes to our workplaces — and our lives. Sign up here.