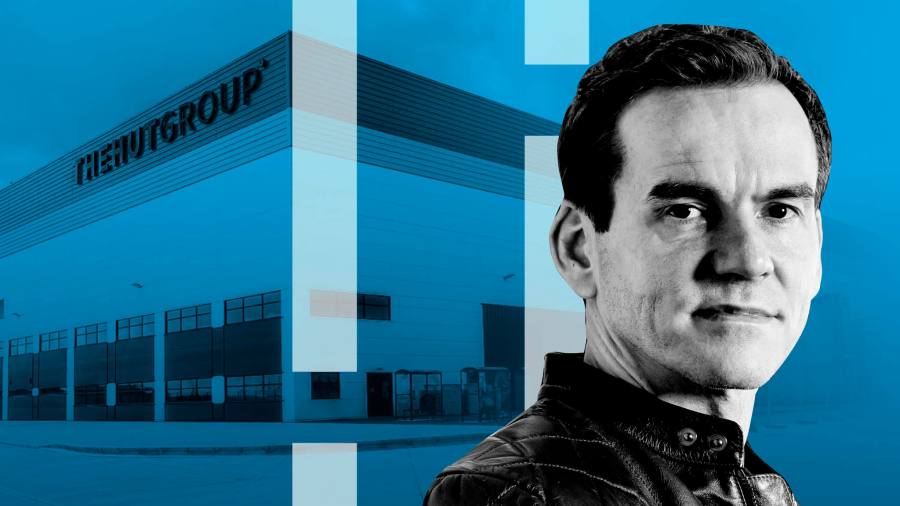 Matthew Moulding had left nothing to chance.

The 49-year-old founder of British tech sensation THG opted to pre-record his speech to shareholders from the company’s new content production facility in Manchester.

The carefully stage-managed investor event on Tuesday was designed to draw back the curtain on “Ingenuity”, THG’s star subsidiary and the rationale for investment from Japan’s SoftBank.

But first Moulding had a message for the doubters.

“We are clearly aware of the short attack that was initiated against THG in the past 10 days, centring around the capabilities of our Ingenuity platform,” he explained, referencing a recent scathing analyst note.

“It’s fortuitous, therefore, that we have the opportunity today . . . to set the record straight on any claims made.”

By the time the glossy presentation on the “genius of Ingenuity” wrapped up, THG’s share price was down 5 per cent. As the event shifted to live questions, it tumbled a further 10 per cent. After Moulding and his business partners finished the call, the stock went into free fall, ending the day down more than a third, wiping a cool £1.85bn from the market value of the business formerly known as The Hut Group.

One City adviser called the question and answer session “shambolic”. Another despaired at Moulding’s broadside against short sellers: “Even if you think it, you shouldn’t say it.”

For the London stock market, THG’s share price crash was another embarrassment in a year of tech-related fiascos, from Deliveroo’s disastrous March IPO to the recent 50 per cent fall in Alphawave’s shares.

But the crisis of confidence has also left analysts and investors asking more fundamental questions about the cash-burning purveyor of beauty products and protein shakes that raised £1.9bn in a marquee IPO just over a year ago.

When tech consultant Alan Wilson and former lawyer Niki Tibble launched carbon offsetting start-up MoreTrees in November 2020, they probably did not expect the business to be the target of a multimillion-pound buyout five months later.

Yet in April THG did exactly that, paying £500,000 upfront and £4m in deferred consideration as part of its strategy to “drive scale into a hugely important sustainability action”.

While THG is best known for selling lipstick and protein powder to image-conscious consumers, its breakneck run of acquisitions has also included a string of esoteric smaller businesses, such as a Preston-based plastics recycling company.

These deals cut to a question that has dogged THG throughout its 17-year history: what exactly does the company do?

At the core of the company is Lookfantastic, the centrepiece of a direct-to-consumer beauty retail business, and a nutrition business, focused on the MyProtein brand bought for about £60m in 2011. Sales in the nutrition business have since grown by an average annual growth rate of 43 per cent, success the company puts down to its Ingenuity system.

But the two segments, which accounted for nearly 80 per cent of group revenues in the first half of the year, are relatively low-valued ecommerce businesses.

It has always been Ingenuity — once described by Moulding as a “social media influencer platform” — which has excited and confused investors in equal measure.

Largely assembled through acquisitions of businesses from web hosting to translation services, Ingenuity offers other brands access to THG’s technology platform and logistics capabilities. It accounted for about 9 per cent of first-half sales. But Ingenuity Commerce, the part offering an end-to-end ecommerce solution to third-party clients, accounted for 2 per cent, or £18.3m.

One disappointment this week, according to some analysts, was that the presentation did not include details of work with Ingenuity’s larger clients, such as Nestlé, or big new customer wins. Instead, there was an interview with the co-founder of Revolution Beauty, the £387m make-up brand that recently listed in London, and which Moulding has invested in, according to reports.

“A lot of clients don’t like being talked about,” said one person close to the company, arguing that the presentation was always intended to be an explanatory session and not to provide new figures, such as divisional profit margins.

Time is on SoftBank’s side

THG’s challenge is living up to the expectations set for Ingenuity in May, after Japanese technology investor SoftBank invested $730m in the group and acquired an option to invest in a new Ingenuity subsidiary.

The complex deal allowed 15 months for THG to spin off the Ingenuity unit and SoftBank to decide whether to buy a 19.9% stake for $1.6bn. But Moulding in May told investors he anticipated this “going through in six months’ time”. This week, management said the deal should close in the first half of 2022.

SoftBank has no obligation to complete the deal at all and the current share price is not encouraging. The price agreed with SoftBank reflects an enterprise value for Ingenuity of £4.5bn, about £1bn higher than the current market capitalisation of its parent company.

“We have the benefit of time to decide on whether to exercise [the option] or not,” a SoftBank executive told the FT. “I don’t know why analysts are assuming anything about the option being mandatory. It never was.”

SoftBank’s investment — which is now deeply underwater following the share price slide — was spearheaded by Akshay Naheta, a former Deutsche Bank trader who masterminded the Japanese group’s intricate $1bn bet on the technology company Wirecard before its collapse in a fraud scandal.

After the financial investment, THG announced that nine SoftBank-backed companies were “partnering” with Ingenuity. Warehouse robotics group AutoStore is powering a new automated “retrieval solution” in Manchester, for example.

However, AutoStore, which is in the process of listing on the Oslo Stock Exchange, describes THG simply as a “customer” and a person close to the matter said all material partners were described as such in the IPO prospectus.

Moulding is an apt figurehead for a business that has forged close ties with Instagram influencers, generating attention for his shirtless social media posts and jet set lifestyle.

But those who know him describe a talented and hard-working entrepreneur. “What I see in Matt is quite rare,” said Sir Tom Hunter, the retail and property investor, who was one of Moulding’s early backers and remains an investor. “He can see the strategy piece . . . but the execution of how he gets there is amazing as well. Not many have got both.”

Speaking to the FT in 2010, the then 38-year-old Moulding outlined how a hard upbringing in the north-west of England had influenced his approach to life and business.

“You soon realise the value of money when your dad’s gone out for a day’s work and made nothing because the weather’s bad,” he said, in reference to his father’s work as an itinerant labourer resurfacing driveways.

Then known simply as The Hut, the company originally made its money selling CDs and DVDs online for other retailers, avoiding UK sales tax by basing its distribution operation in the Channel Islands.

Back in 2010, the six-year-old company had just achieved a valuation of £32m after winning investment from Balderton Capital, an early triumph that was intended to pave the way for an IPO the following year.

But in preparation for listing, new auditors PwC realised it had been provided with a falsified document during its audit — scuppering the planned listing.

Independent research firm The Analyst highlighted the incident in a sceptical assessment of THG’s business published earlier this month that drew Moulding’s ire on the investor call.

Mark Hiley, the firm’s managing partner and founder, told the FT that Moulding’s description of his firm’s research note was “inappropriate”.

“At its core, we just thought The Hut Group was overvalued,” he said. “How that is a ‘short attack’ is beyond me and it was unfortunate that management chose to use that line.”

Switzerland’s PSquared Asset Management is the only disclosed short seller betting against the company’s stock, with a position equivalent to 0.7 per cent of the shares. This puts THG outside of the top 50 most-shorted companies on the London stock market.

“It has not been a great day, that’s for sure,” Moulding admitted after the presentation. But the company’s founder was at loss to explain the share price crash

“I don’t know the full answers to that,” he told the Daily Mail on Tuesday. “I’ll be on that with the banks very shortly.”

THG’s corporate brokers Barclays, Citigroup and Jefferies all declined to comment to the FT.

Moulding’s ties to some of them run deep. Barclays stood by his nascent business during the 2011 revelations of fraud, agreeing to waive a banking covenant that would have been breached. Citigroup’s Philip Drury, the US bank’s global head of tech banking, once shared a London flat with the then young entrepreneur in the 1990s. Drury declined to comment on his relationship with Moulding, describing the FT’s inquiry as “entirely inappropriate”.

THG’s best course now is to press ahead with its strategy which remains unchanged, say people close to the group, and prove that the market is now undervaluing the Ingenuity business.

One other option under consideration to start the process of winning back the trust of investors is to strengthen the company’s board, said one person familiar with the matter, who said Moulding could even relinquish his role as chair, which he holds in addition to his position as chief executive, in contravention of City best practice.

While praising THG’s “phenomenal tech”, the SoftBank executive conceded that there needed to be “governance changes”.

Others are less convinced the company can be reformed. One former longstanding shareholder said he disposed of his stake having grown concerned around the group’s opacity and governance issues.

“Since the days of old, men have been telling people they can turn lead into gold,” he said. “They can’t.”