With the M1 Apple already had one of the fastest laptop chips around, but yesterday’s M1 Pro and M1 Max raise the bar even higher. How high? The first Geekbench result is out and it wipes the floor with the last MacBook Pro 16”, which came out in 2019.

The MacBookPro18,2 ran the test with an Apple M1 Max chipset. This should be the MacBook Pro 16” since it’s currently the only one with the Max chip (the new 14” model should get it too at some point).

The laptop in question was configured with 32 GB of RAM and ran macOS 12.4. A quick peek at a MacBook Pro with an Intel Core i9-9880H – the latest MacBook available in a 16” form factor – shows a massive gain in single-threaded CPU performance and close to double the multi-threaded performance.

Admittedly, Apple didn’t put a lot of effort to keep up with Intel’s latest chips. So, let’s look at the MacBook Pro 13” with the original M1 chipset running macOS 12.0. As expected, the single-threaded speed is essentially identical – both use the large core from the Apple A14 chipset. The difference in multi-threaded workloads is huge, though. 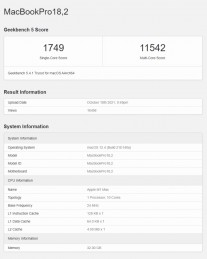 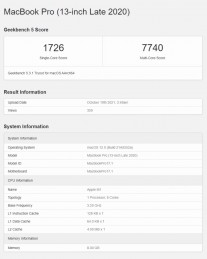 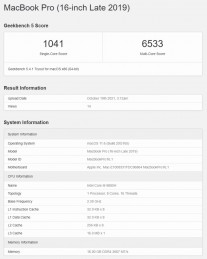 You can try looking at Geekbench results for laptops with newer Intel processors, AMD Ryzens too. However, cross-platform testing is already iffy enough when going from x86 to ARM, also changing the OS would make these benchmark scores even less representative of real world performance.

That said, it is pretty clear that the new MacBook Pros are some of the fastest laptops that money can buy. Apple while didn’t announce a new Mac mini or an iMac, the M1 Pro and M1 Max chipsets will be quite impressive as desktop chips some day.