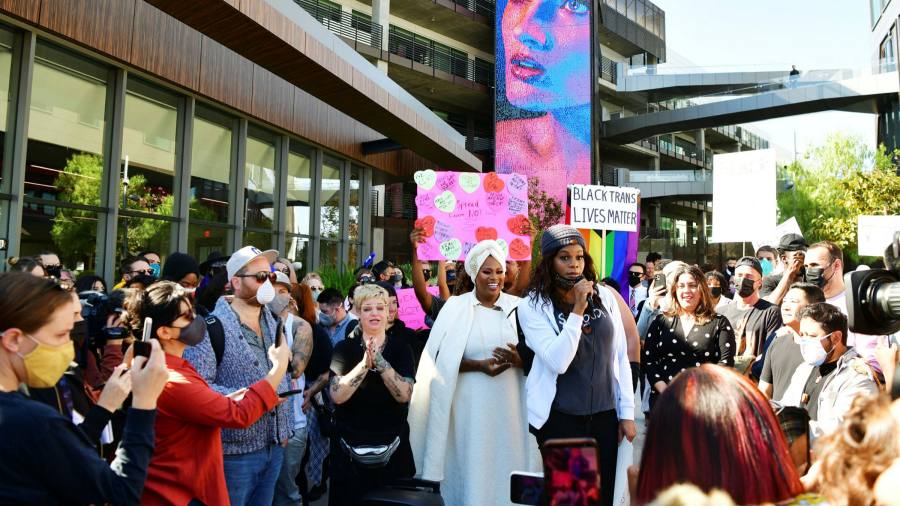 As dozens of Netflix employees stopped working and poured into the plaza in front of one of the company’s Los Angeles offices on Wednesday, they were greeted by trans activists who had turned up to show solidarity with the walkout.

Holding placards reading “Hate isn’t funny,” “Black Trans Lives Matter” and “Hateflix,” the activists condemned Netflix for carrying programming that they said could encourage discrimination or even violence against members of their community.

Not everyone agreed with their cause. “I think Dave is funny!” yelled a man passing by on the sidewalk. The Dave in question was comedian Dave Chappelle, whose Netflix comedy special “The Closer” has sparked a culture war inside the world’s largest streaming company.

Chappelle’s mocking references to transgender people — and the ham-fisted reaction from senior Netflix executives to the resulting criticism — has resulted in one of the worst public relations crises in the company’s history.

This is not about the [Chapelle] special. This is about having parity in content, making sure that less harmful content is created

The protesters said they were not demanding that the Chappelle special be removed from the streaming platform. Instead, they are calling for Netflix to invest as much money in “trans and non-binary content” as it does in “transphobic content”. They also want the company to recruit more trans people, especially those of colour, to senior positions.

“This is not about the [Chapelle] special,” said B Pagels-Minor, a former manager at Netflix who was fired this month for allegedly leaking data about the Chappelle show. “This is about having parity in content, making sure that less harmful content is created.”

Netflix has defined itself with a radical, “no rules” corporate culture, extolling the importance of both creative freedom and progressive values. But now those two ideals are crashing into one another.

The company has for years offered unlimited vacation and a full year of paid parental leave, rarities in corporate America. In 2019, when Republicans were pushing forward an anti-abortion law in Georgia, no large company spoke out until Ted Sarandos, co-chief executive at Netflix, warned the streaming group would “rethink our entire investment in” the state if the legislation were to take effect.

On screen Netflix also blazed a trail, pushing forward more diverse voices than typically seen on broadcast television, and experimenting with new genres that might once have been deemed too niche. Orange is the New Black, one of Netflix’s earliest hits, broke new ground for transgender representation on screen, with Laverne Cox becoming the first transgender person to win an Emmy for her role in the series.

However, Netflix’s rise also relied on the notion of letting creatives roam. In a now famous slide deck about Netflix’s culture — which Facebook chief Sheryl Sandberg called possibly “the most important document ever to come out of [Silicon] Valley” — co-chief executive Reed Hastings extolled the virtues of freedom over bureaucracy.

This proved useful to Netflix’s business interests. As a newcomer in Hollywood, it offered higher pay and more artistic freedom to top talent, helping lure them away from more established studios. Comedian Tina Fey has said that “you have to be a little more polite” on broadcast television, while on Netflix “you can get into more dangerous topics”.

But it is this very attitude that has proved so problematic for Sarandos, who has spent weeks publicly defending Chappelle — among the most successful comedians of the past few decades — to his own disgruntled employees.

Netflix has gone through previous controversies over its programming, once removing a scene from an episode of 13 Reasons Why after health experts linked it to an uptick in suicides. But none have incited this level of public unrest from staff, who have taken to social media, crashed senior-level meetings and leaked sensitive documents. Three employees have been suspended during the saga, in addition to Pagels-Minor’s dismissal.

In a statement, Netflix said it respected the decision “of any employee who chooses to walk out” for the protest on Wednesday and admitted it had “much more work to do both within Netflix and in our content”. 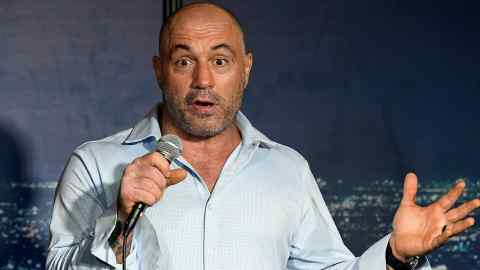 Netflix faces a similar dilemma to other tech companies, such as YouTube and Spotify, as they toe the line between controversial content and commercial interests.

Spotify has faced internal blowback over the company’s association with Joe Rogan, its biggest podcast star who, in an episode on Spotify this year, encouraged young people to not receive the Covid-19 vaccine.

Spotify paid more than $100m to bring Rogan to Spotify exclusively. When asked last year about Rogan’s decision to invite Alex Jones, the far-right founder of InfoWars, on to his podcast, chief executive Daniel Ek told the Financial Times “we want creators to create” and that the company was “not looking to play a role in what they should say”.

Google-owned YouTube has suffered through such controversies for years, as its stars often gain large followings by pushing the envelope with their videos. YouTube in 2017 cancelled a series with its highest-earning star PewDiePie after the Swedish video blogger posted a series of videos containing anti-Semitic comments.

But while YouTube and Spotify can argue that they are simply “platforms” and thereby not responsible for the content on their sites, Netflix has been actively producing TV shows for the better part of a decade, building the largest studio in Hollywood where Sarandos reigns as the new kingmaker.

While still defending the comedy special, even Sarandos concedes he “screwed up” the internal communications. He told reporters this week that his emails to staff, in which he had defended Chappelle on the premise of the comedian’s popularity, had “lacked humanity”.

That communications strategy rested on the shoulders of Netflix PR chief Rachel Whetsone, a British executive who previously worked at Conservative central office in London alongside the likes of George Osborne. She is married to Steve Hilton, a former top adviser to David Cameron who fell out with the UK prime minister over Brexit.

“You can’t be dictated by backlash, but there is a delicate balance,” said a former Netflix executive, who now works in communications for another media group. “This isn’t the old playbook any more. There’s a way to let people have their say, blow off steam, and then course-correct over time.”