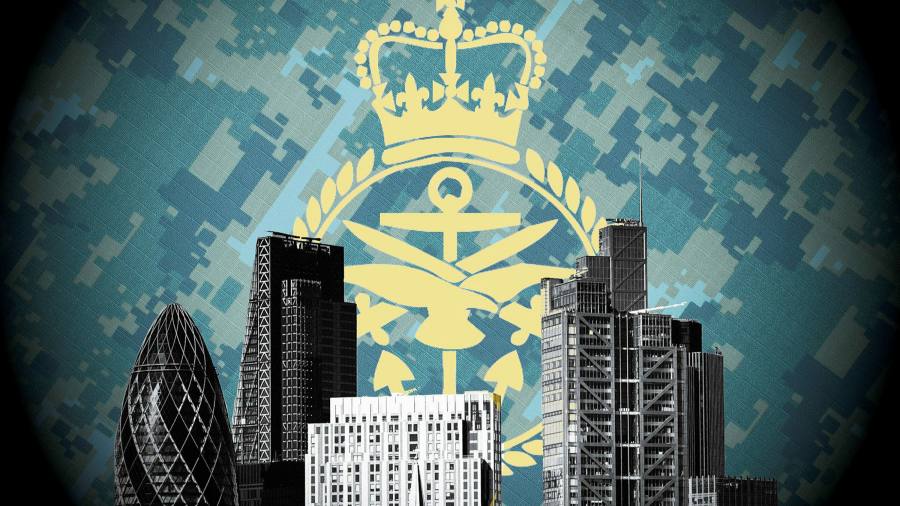 A taskforce of former bankers and financiers is helping the UK military sharpen its skills in economic warfare as a bulwark against growing threats including terrorism, cyber attacks and disinformation campaigns.

The secretive unit — established by Britain’s Ministry of Defence six years ago to disrupt Isis’ commercial activities in Iraq and Syria — is staffed by a handful of former City professionals with expertise in commodity markets and international money flows.

Its specialists are now in increasing demand as adversaries such as Russia and China have exploited the “grey zone” between peace and war, using cyber weapons to target national infrastructure and making commercial investments in sensitive overseas industries.

The taskforce, made up predominately of reservists with City experience, has worked with special forces, intelligence agencies and the army’s 77th Brigade information warfare unit to weaken adversaries by limiting their access to finance. The Financial Times has been asked not to disclose the unit’s size or operational remit for security reasons.

“You need to find the critical elements in the business model of the people you’re up against, remove those, and make it very hard to replace them,” explained Air Marshal Edward Stringer, the MoD’s former director-general of joint force development who oversaw the team until his retirement from the armed forces earlier this year.

“Whether it’s Lebanese Hizbollah, the ring of associates around Putin, the Iranian Revolutionary Guard Corps, or even China’s People’s Liberation Army, all these organisations are mini polities with their own economy,” said Stringer, who also served as head of RAF intelligence. “Why let them go as far as the battlefield, if you can denude them of resources before they get there?”

Isis’ rise to power in 2014 carried particular potency because it was the world’s wealthiest jihadi group, enriched by oil revenues, extortion, and taxation in the form of religious tithes.

“The ways Isis was financing itself was unlike any other terrorist group . . . they were trading the dollar, acting as a proto-state” recalled one member of the taskforce, who asked to remain anonymous. He left the City at the height of the insurgency to become a full-time MoD employee. “Someone was needed who knew how money movement works”.

Working in an international alliance of military and finance experts from the US, Saudi Arabia and Italy, the team of British financiers helped analyse financial ledgers, receipts and computer records gleaned from raids on prominent figures including Isis’ book-keeper, Abu Sayyaf.

The resulting intelligence on the terrorist group’s revenue streams prompted global sanctions to prevent Isis accessing replacement parts for its oil facilities, and chemical additives needed to turn crude oil into usable fuel for its vehicles. The alliance also intervened to block some Isis-affiliated money service businesses from the Iraqi Central Bank’s US dollar auctions, which were providing the insurgents with a profitable arbitrage business.

Since the counter-Isis operations ceased, the unit has been run on an ad hoc basis, and is not a permanent standing capability within the MoD. Stringer is concerned that this temporary status is undermining its potential. “This capability has always existed in the margins,” he said. “We learned something from this taskforce . . . let’s not allow that to evaporate until something comes along again that forces us to reconvene it.”

Bankers are able to enter the armed forces in a number of ways, from applying for a post as a military “regular” through the army’s officer selection board and undergoing training at Sandhurst, to working more flexibly in pro bono roles.

The MoD is also considering reforms to its policies on reservists, including relaxing age and fitness requirements and bringing in a new “lateral” entry regime which would allow industry experts to transfer directly into senior military ranks rather than working their way up the hierarchy.

“We’re really not trying to throw middle-aged bankers out of the back of aircraft [on military operations],” the taskforce member explained. “It’s about using their professional skills.”

Lord Jonathan Evans, a former director-general of the UK’s domestic intelligence agency MI5 who was later appointed a board member at HSBC, told the FT that capitalising on the goodwill and expertise of City professionals could help unite British financial and security institutions around a shared purpose.

“Certainly in my time in intelligence, communication between financial regulators, Treasury, intelligence services and the policy departments . . . was nothing like as strategic as it might have been, because we could ask questions, but there wasn’t a common goal,” he said. “It wasn’t a team sport.”

Stringer agreed: “You’re trying to marry the apparatus of intelligence agencies with the expertise of those who understand business models . . . reservists have a foot in both camps.”

The team’s current activities are secret for operational reasons. However, defence officials said example missions could include advising the UK military on the security impact of the Lebanese currency collapse after last year’s deadly explosion in the port of Beirut, or suppressing proxy forces such as the Wagner group, a Kremlin-linked militia which is now seeking control of rare mineral assets across Africa.

Their expertise could also be targeted at disrupting ransomware gangs which threaten national infrastructure, and tracing financial information gathered on the battlefield in the Middle East to identify British jihadis.

Tom Keatinge, an expert in finance and security at the Royal United Services Institute think-tank, believes the UK government should be doing more to both exploit the skills of its financial services sector and to protect market intelligence within the City.

“People who worked in banking in the late 1980s will tell you that between Friday and Monday when the Berlin wall came down, people they thought were West Germans working on trading floors and in M&A departments just disappeared,” Keatinge said. “They were actually working for [East Germany’s] Stasi, gathering information about the financial activity in the City of London. You can be sure the same thing is happening now with the Chinese.”

Defence officials could also be preparing better to tackle future threats, Keatinge added, suggesting that a standing threat finance team could have spent the past few years mapping which banks, money exchange houses and financiers in the Middle East are sympathetic to the Taliban.

“We avoid pressurising those nodes when we’re trying to negotiate with the Taliban but if you need to, you can come down on them like a hammer and put them out of business,” he said.

The MoD said it was investing in expertise to tackle threat financing “for the long haul”, adding: “We retain some of the best experts from the private sector through the specialist reserves and we work closely with our international partners, as well as partners across government, to exchange expertise and knowledge.”

“When I look into the future at cyber security or other hybrid threats, financial tools are going to play an important role,” Glaser said. “They allow us to be creative . . . to reach out and touch these guys in ways they’re not expecting.”