A central figure in former US president Donald Trump’s bid to create a new social media platform is a Brazilian parliamentarian and self-proclaimed prince who has campaigned to restore elements of the monarchy that ended with the overthrow of Emperor Pedro II in 1889.

Luiz Philippe of Orléans-Braganza was elected to Brazil’s National Congress three years ago, and has put forward the idea of creating an unelected head of state with powers to veto the legislature’s decisions. He is a crucial ally of Brazil’s far-right president, Jair Bolsonaro.

Media reports in Brazil often refer to Orléans-Braganza simply as “O Príncipe”, or “the prince”. His political identity leans heavily on ancestral ties to Brazil’s last emperor, who ascended to the throne at the age of five and reigned for more than half a century.

Orléans-Braganza’s royal title is not mentioned, however, in securities filings for the business venture where he serves as chief financial officer: a “blank cheque” acquisition company that on Wednesday agreed to merge with Trump Media & Technology Group. Orléans-Braganza did not respond to a request for comment.

Trump’s deal with Digital World Acquisition Corporation could provide hundreds of millions of dollars for his social media start-up. It could also create the conditions for a political resurrection. 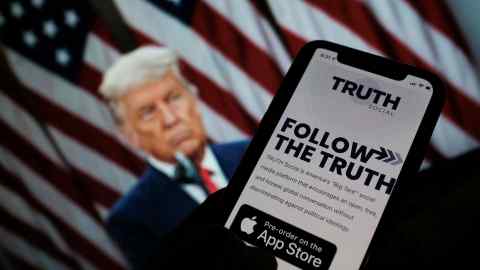 The former president’s contribution to the US public discourse has diminished since January 6. Twitter and Facebook banned him from their platforms shortly after he lent encouragement to the angry mob that stormed the US Capitol in an attempt to reverse the outcome of the 2020 election.

Now he is aiming to launch his own platform, named Truth Social, “to stand up to the tyranny of Big Tech”.

“We live in a world where the Taliban has a huge presence on Twitter, yet your favourite American President has been silenced,” Trump wrote in a statement. “I am excited to send out my first TRUTH on TRUTH Social very soon.”

The transaction announced on Wednesday will combine two entities that at present are little more than corporate shells.

Digital World completed an initial public offering last month. It raised $293m, mostly from hedge funds that specialise in providing initial financing to “special-purpose acquisition companies”. These vehicles typically have no operations and only skeletal management teams, and use the money they raise to go hunting for acquisition deals.

The merger with Trump Media was agreed with impressive speed. Under the securities rules that govern Spacs, Orléans-Braganza’s company was required to certify that it did not have an acquisition target in mind at the time of its IPO on September 8.

Only six weeks later, Digital World announced a deal to put its cash reserve at the disposal of Trump’s new venture, which aims to create “the first major rival to ‘Big Tech’” by countering “liberal bias” and creating a “‘non-cancellable’ global community”.

Truth is not yet available for download. A page on Apple’s App Store promises that it will include standard features of social media apps, such as notifications, profile pictures, and a message feed. A presentation posted on the company’s website envisages an “inclusive ‘big-tent’ approach” where “all are welcome”, but also pledges to “[galvanise] a conservative media universe”.

Even the former president’s involvement in an executive capacity may not be a given. A presentation published on the company’s website mentions Trump’s name at least a dozen times, but also includes a significant disclaimer. “All personnel listed in the deck may change,” the presentation states. “There is no guarantee whatsoever that [any] employment agreement will be finalised.”

Regardless of how the venture takes shape, the hedge funds that provided Digital World’s cash stand to make a risk-free return. Investors in Spac IPOs have a right to redeem their shares at a premium rather than going along with any deal.

Some of Digital World’s early backers have done far better than that by selling into the runaway rally that followed the announcement of the Trump deal. Trading was so brisk on Thursday that a volume of shares equivalent to the company’s entire share capital changed hands multiple times, according to data from S&P Global Market Intelligence, at values that reached as high as 4.5 times the price in last month’s IPO.

For those who bought in at $94.20, the price at Friday’s close, the chance of making a profit depends largely on Trump’s ability to turn initial financing of a few hundred million dollars into a social media enterprise commanding a valuation in the billions.

If Trump succeeds, one of the biggest winners will be Patrick Orlando, a Florida-based financial executive whose little-known firm, ARC Global Investments II LLC, put up $25,000 to buy a stake in the blank cheque company. Orlando owns about 17.8 per cent of Digital World, according to a September 8 regulatory filing — a stake that was worth more than $600m on Friday.

Digital World portrays Orlando as a seasoned financial executive whose “25-year career . . . covers all aspects related to special purpose acquisition corporations”. Securities filings list him as having senior roles at three other blank-cheque vehicles, including Yunhong International, a Wuhan, China-based shell company initially set up by local businessman Yubao Li. None of those companies has yet completed an acquisition.

Incorporated in 2003, Pure Biofuels raised millions from investors to finance the construction of a biodiesel processing plant in Lima, Peru. The company had not generated any significant revenue by the time Orlando left in 2011, and was later dissolved.

Orlando returned to the US and began working for BT Capital Markets, a boutique Miami investment bank where, according to court filings, he worked on a $115m deal to finance a fleet of tugboats purchased by Venezuela’s state-owned oil company, Petróleos de Venezuela.

During the decade that preceded his deal with Trump, Orlando sometimes fought legal battles against business associates.

One lawsuit involved a tussle over the ownership of a Miami condominium unit, which Orlando maintained had been transferred to him by a former colleague at Pure Biofuels in partial repayment of a loan.

Another took aim at a colleague at a different company, who had allegedly failed to repay money he owed. The dispute apparently arose because of difficulties in arranging the sale of what is described in court filings as “a $50m Honduras debt held by . . . a Swiss banking institution”.

“In trouble with bankers, wife, family, paying bills late . . . and gets worse every day,” Orlando wrote in a 2012 email that was reproduced in court filings.

“Sometimes don’t pick up when my dad calls to avoid talking out of sheer embarrassment,” Orlando went on. “The last 3 months I barely answer if Peru or unknown number.”

Orlando did not respond to a request for comment.

It is unclear how Orlando recruited a Brazilian prince to serve as the financial brains of his new technology venture, or how the pair convinced Trump to sign on to the most significant business deal of his post-presidency.

But Orléans-Braganza, who was an investment banker at JPMorgan Chase and Lazard Frères before he took up politics, has long expressed his admiration for people in Trump’s inner circle.

“Rudy Giuliani was a heroic lawyer who confronted the mafia of his time,” Orléans-Braganza wrote on Twitter, in Portuguese. “Now he is placing [voting machine supplier] Smartmatic on public trial.”

On Thursday, a day after Trump’s Spac deal was announced, Orléans-Braganza posted two photographs on Instagram. In one, the Brazilian royal posed with Trump; in the other, he brandished a “tombstone” commemorating the Digital World IPO.

Orléans-Braganza said he was “honoured to be part of this project”.

“The new platform came about to combat the tyranny of Big Tech,” he added, writing on the Facebook-owned website.