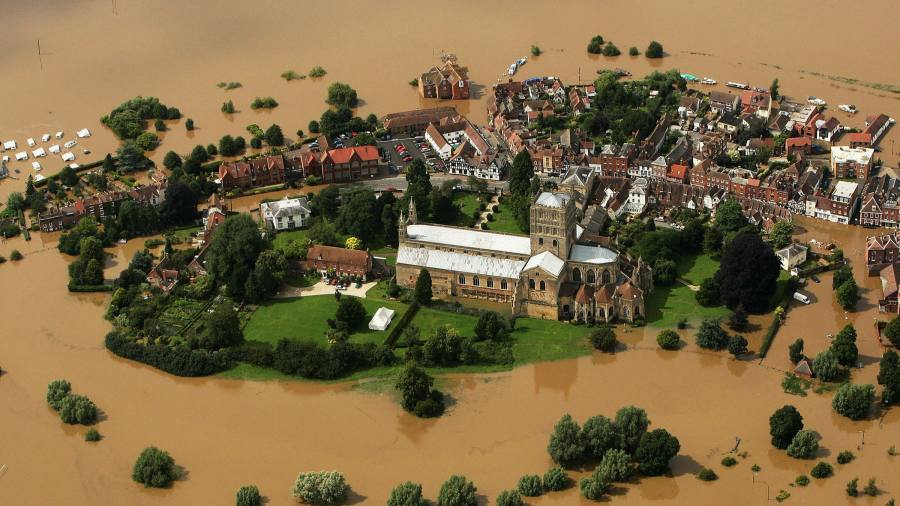 Britain’s bad weather is the stuff of polite small talk. But the warmer and wetter climate is moving beyond the level of mere chit-chat. Downpours are more common and flooding is on the rise. Parts of London resembled Venice after flash flooding this summer. The financial toll, like water levels, is rising.

The UK’s 2007 summer floods — a once-a-century event — caused £1.5bn of damage to homes. About 3m homes in England are at risk of flooding; assuming weather patterns persist, an additional 1.2m UK properties may join that tally by 2050, reckons Ambiental Risk Analytics. The consultancy, spun out of Cambridge university, is among those using advances in mapping and data to tackle the issue.

The cost of flooded homes ripples out to insurers and mortgage lenders. The latter face a drop in collateral value. Justin Butler, Ambiental’s boss, calculates that about 4 per cent of the value of a home is lost the first time it floods; further flooding inflates that number. At this rate, absent any steps to reduce the impact, premiums for flood-related insurance stand to double over the next 30 years.

The problem is global. The Thai floods of 2011 knocked out key links in the global supply chain. Half of Louisiana’s critical infrastructure faces the risk of flooding this year, a recent study found. Climate change could bring the haven status of the $4tn US municipal bond market into question.

Improvements in hydrological modelling techniques — tracking and predicting the water cycle — are a growth area. Previsico, which has raised £1.75m to fund US expansion, says it can predict flooding down to a 25m resolution with accuracy rates of up to 90 per cent.

Index compilers and hedge funds are applying big data methods to identify the flood risks borne by companies. One area of research is to automatically match all the addresses occupied by a company with their position relative to watercourses and the sea. That may allow investors to spot flooding-exposed businesses more accurately, so they can trim their exposure when storms are predicted.

Fire, like rainstorms, is both a blessing and a curse to mankind. Insurers have required householders to take measures against blazes for many years. Smoke alarms spring to mind. As water’s threat to wealth and health grows, expect flood protection and predictive technology to become equally vital.