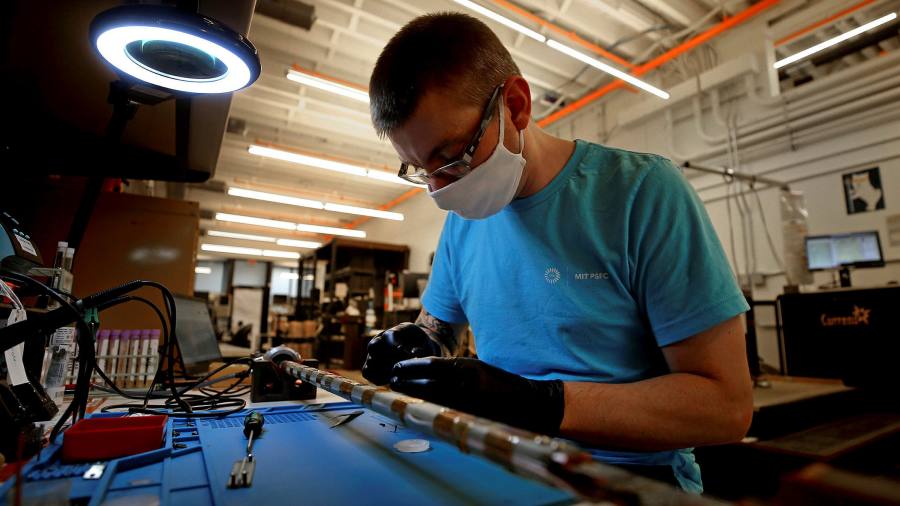 Private sector investment is flowing into nuclear fusion companies at record levels in the hope that a decades-long effort to generate clean, cheap energy by fusing atoms is closer to fruition.

There are at least 35 fusion companies around the world, 18 of which have received a combined $1.8bn in private funding, according to the first study of the sector published on Thursday by the UK Atomic Energy Authority and the newly formed Fusion Industry Association.

Of the 23 companies that responded to the survey, more than half were founded in the past five years, in a sign of growing private sector interest in the technology.

The prospect of almost limitless power from minimal fuel has tantalised scientists for more than 60 years but has always seemed just out of reach. Soviet scientists pioneered the development of the first fusion machine, known as the “tokamak”, in the 1950s. The design enabled a plasma of two hydrogen isotopes, deuterium and tritium, to be held in place by powerful magnets and heated to temperatures hotter than the sun so that the atomic nuclei fuse, releasing vast amounts of energy.

To this day, no group has been able to do this while producing more energy than the machine uses in the process, and sceptics joke that commercial power will always be 20 years away. But some in the industry say this breakthrough — known as net positive energy — is much closer.

“We are at this cusp of the commercialisation point where we are taking all of the research that’s been done for 60 years, into plasma physics, fusion energy designs, and we are now applying it to engineering, ” Andrew Holland, chief executive of the Fusion Industry Association told the Financial Times.

Until recently, fusion research was driven by the public sector through international government consortiums, but progress at projects such as ITER — a nuclear fusion reactor in the south of France conceived in 1988 — has been extremely slow.

“That is just not the way that technology moves from scientific labs to the marketplace,” said Holland. “It is the private sector that commercialises a new technology, whether it’s aeroplanes 120 years ago, or nuclear fission in the 50s, 60s and 70s.”

Four of the most advanced companies, which between them account for 85 per cent of private sector funding, are Commonwealth Fusion Systems, California’s TAE Technologies, Oxford-based Tokamak Energy and Canada’s General Fusion, backed by Jeff Bezos.

Commonwealth Fusion Systems, or CFS, last month successfully demonstrated the use of a high-temperature superconductor to generate a much stronger magnetic field, which its engineers believe will allow for a more compact fusion power plant that will be quicker and cheaper to build than, for example, ITER.

“It’s the type of technology innovation that you know shows up every once in a while in a given field,” Bob Mumgaard, CFS chief executive said in an interview. “It’s like you have propeller planes that work and that you understand, but then someone makes the jet engine.”

CFS, which was spun out of the Massachusetts Institute of Technology and is backed by the Italian energy group Eni, hopes to demonstrate net positive energy by 2025 and to turn on a commercial machine in the early 2030s.

Most of the surveyed companies, which also include groups from China, India and Australia, are employing different approaches to fusion. Some 71 per cent said they believed fusion power would be connected to the grid in the 2030s.

As the process is safer than nuclear fission and its primary fuels of deuterium and tritium are widely available, fusion’s proponents say it can play a vital role in reducing the world’s dependence on fossil fuels.

“Our companies are planning for the 2030s to be the decade of commercial fusion power,” Holland said.