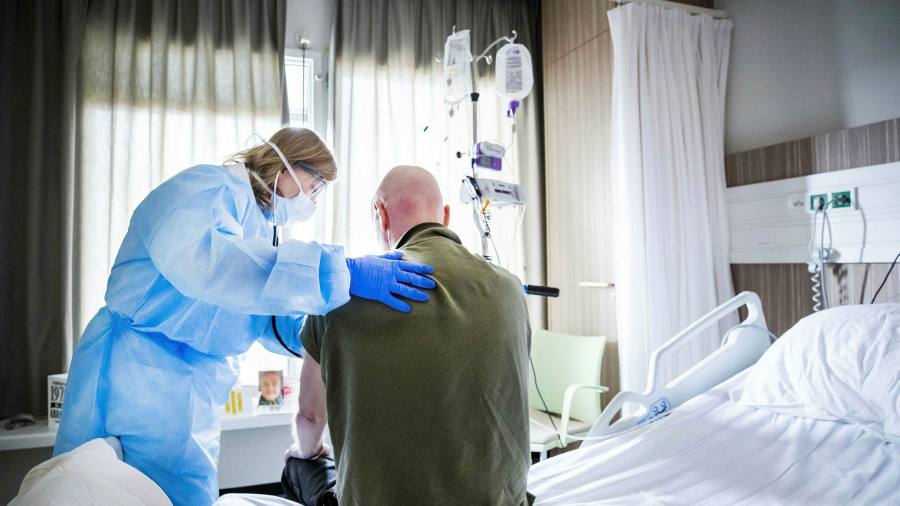 Satya Nadella, Microsoft’s chief executive, said two years ago that artificial intelligence would be perhaps the most transformational technology of our time, and that healthcare is “perhaps AI’s most pressing application”.

Since then, the coronavirus pandemic has accelerated the use of AI further.

The promise of AI in healthcare has lured $2.5bn of investment, across 100 deals, in the first three months of 2021, according to research by Fierce Healthcare.

But a special series on the future of AI and digital health from The Lancet and the FT warns against too much hype.

Physicians say the road to personalised healthcare, powered by AI, is a long one, and nor can technology fill the gaps left by shortages of doctors and nurses. A separate report published this week also urges governments to draw up coherent regulations for how AI can be used in healthcare.

Ajay Aggarwal, a consultant clinical oncologist at Guy’s & St Thomas’ NHS Trust and a contributor to the Future of AI and Digital Healthcare, believes that governments still need to work out the value AI brings to medical systems:

Without rigorous evaluation, we risk deploying costly technology that offers little value and may even prove detrimental. It may fail to work; not improve the effectiveness of care; be unaffordable or impossible to scale; and ultimately waste scarce resources better used elsewhere to improve patient outcomes.

The use of cloud software to support radiotherapy in Ghana, Tanzania and Botswana offers a telling example. The technology was used effectively in the US, but in these countries it stumbled at the first hurdle: low internet speeds and incompatibility with existing systems rendered it unusable.

In specific medical settings, AI is already proving to be a valuable tool. Pathologists for example, increasingly lean on AI when carrying out cancer diagnoses. Machine learning techniques, a subset of AI, have been applied to the field of histopathology with the aim of speeding up cancer diagnostics by identifying and grading tumours.

Regina Barzilay, a computer scientist at the Massachusetts Institute of Technology, developed a machine-learning model to identify women at high risk of developing breast cancer that was more accurate than that used by physicians. A researcher in France last month developed an AI model along with start-up Owkin that predicts the risk of breast cancer patients having a metastatic relapse, which the group argues could be used to help avoid unnecessary chemotherapy.

But the reality is that few algorithms are currently ready to be deployed at the clinical level. And regulation will be vital as the technology races ahead.

As the co-chairs of The Lancet & Financial Times Commission on Governing Health Futures 2030, argue: “There is too much at stake for the future of health and wellbeing to leave digital transformations ungoverned.”

Read more about the Future of AI and Digital Healthcare here.

1. Regulators target DeFi with new global standards
Global authorities have taken the first step to bring decentralised finance (DeFi) under regulatory oversight after rapid growth in the blockchain-based alternative to the traditional financial system. An intergovernmental body in Paris that sets standards for anti-money laundering said today that creators, owners and operators of DeFi services should comply with rules designed to combat money laundering and terrorism financing.

2. Sony bullish earnings
Sony has raised its annual profit guidance by 6 per cent, looking forward to better prospects in film, music and image sensors used in smartphones. The entertainment and technology conglomerate said the chip shortage has slowed the production of its PlayStation 5 gaming consoles. For the fiscal year through March 2022, Sony expects an operating profit of ¥1.04tn ($9.1bn) instead of ¥980bn on revenue of ¥9.9tn, up 2 per cent from its forecast in August, in line with market expectations.

3. Samsung hits highest profits in 3 years
Samsung Electronics’ net profit jumped 31 per cent to Won12.3tn ($10.4bn) in the July-September quarter as sales increased 10 per cent to a record Won74tn. The world’s biggest maker of computer chips, smartphones and electronic displays has benefited from surging demand during the Covid-19 pandemic, but chip prices have come under pressure as workers have begun to return to the office and economies reopen. Samsung warned of uncertainties next year due to supply chain disruptions and higher prices for raw materials.

4. Nuclear fusion’s clean energy promise
Private sector investment is flowing into nuclear fusion companies at record levels in the hope that a decades-long effort to generate clean, cheap energy by fusing atoms is closer to fruition. There are at least 35 fusion companies around the world, 18 of which have received a combined $1.8bn in private funding, according to the first study of the sector published today by the UK Atomic Energy Authority and the newly formed Fusion Industry Association.

5. Shell’s brush with activist investors
Royal Dutch Shell’s chief executive has warned that replacing long-term shareholders with hedge fund investors risks derailing the energy sector’s transition plans at a critical moment in the climate crisis. The comments by Ben van Beurden follow a decision this week by one of the world’s largest pension funds to sell its entire holdings in fossil fuel companies and come a day after it was revealed that Daniel Loeb’s activist fund Third Point had called for Shell’s break-up.

As world leaders gather in Glasgow for the COP26 Summit to thrash out international solutions to the climate crisis, #techFT looks at technology that will help readers cut their carbon footprint and save money on energy bills. Smart thermostats measure energy usage and identify ways to cut electricity use.

Tom’s Guide writes that the third-generation Nest Learning Thermostat and Ecobee SmartThermostat are fairly well matched. Both are easy to install and use and have nifty functions such as motion sensors that detect when no one is at home and adjust radiators and air conditioners accordingly. Mike Prospero from Tom’s Guide says the Google-owned Nest thermostat is more attractive, but the Ecobee has a slight technology edge because it has secondary sensors allowing users to monitor the temperature in rooms throughout the home, versus the Nest, which can monitor the temperature in only one room.