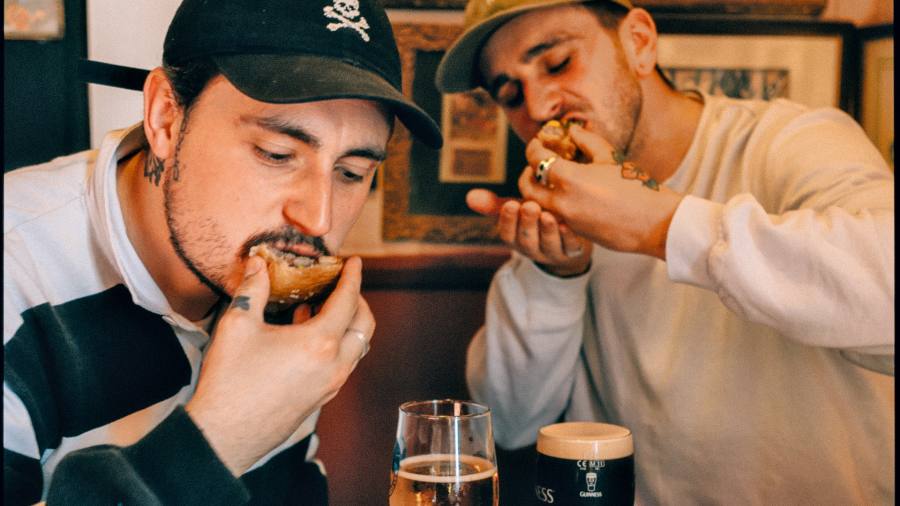 “Fries are always a bit disappointing when you get a delivery,” writes chef Thomas Straker on an Instagram post. And so it is one cold Sunday evening that I find myself cooking chips at home from his online tutorial. During the 30-second video, the 31-year-old London-based chef – dressed in a baggy Nike T-shirt – teaches me three things. The best kind of potato for fluffy fries is an agria; they should be cooled in the fridge between slam dunks in a chip pan; and making restaurant-worthy triple-cooked fries at home is really, really easy.

This is a life-changing culinary insight: the 100,000-plus others who have viewed this video – including the actor Jodie Comer, who enjoyed it so much she gave it a like – will no doubt agree. But it’s perhaps surprising that the classically trained Straker, who cut his teeth at Michelin-starred The Ledbury and was head chef at Casa Cruz in Notting Hill, is teaching us how to perfectly crisp a chip rather than froth a beetroot into foam or whip cod’s roe. And he’s doing it not via a cookbook, but for free on Instagram.

Straker is part of a new wave of young chefs getting out of the kitchen and becoming front-of-house stars of their own social channels. Offering easily digestible recipes in bite-sized formats, they are more likely to be dressed in sneakers, T-shirts or camp collar shirts, and garnished with caps and jewellery, than starched white aprons. With their casual vibe and easy humour, they’re enticing us to turn on the hob – thus whipping up a new community of kitchen bros. Of course, many women follow them – and female chefs such as Rosie Mackean (aka the “Pasta Queen”) offer a similarly down-to-earth approach. But the attitude and culture of this new breed of baker leans heavily towards the lad.

The shift to social media was hastened by the pandemic, when hospitality shuttered and chefs were out of work. Many posted tutorials to fill the hours. Frederik Bille Brahe of Atelier September in Copenhagen shared recipes for the honey, olive oil and vanilla granola that he serves up in his café. For others, the pandemic pushed them towards a new way of working altogether. Whyte Rushen, formerly of Brat, Scully and Kerridge’s in London, quit the kitchen trade and now teaches his Instagram followers how to cook barbecue corn with Polish mayo or soba noodle salads. Johnnie Collins of the new Light Bar in Shoreditch and Dorset-based cook Julius Roberts preach the benefits of home-grown vegetables – Collins says cooking what you cultivate is “meditative”. Meanwhile, twentysomething New Yorkers Roze Traore, a graduate of Le Cordon Bleu and occasional Nike model, and Pierce Abernathy, a video producer-turned-cook, offer recipes for “banging” chips and dips. Bob-haired, bespectacled Abernathy even has a pair of ’90s-style jeans embroidered with the motto “Don’t Skip the Dip!”

Relatability is key. “It’s the food you actually want to eat,” says Straker, speaking over Zoom from his kitchen, the setting for all his videos. Having switched his white chef’s hat for a navy cap, he now makes much of his money through brand partnerships and restaurant residencies. “Lobster tail isn’t exactly accessible,” he adds. “Most of the time I’m cooking whatever I’m having for lunch.” Georgia Willan, a 30-year-old publicist who follows Straker and regularly cooks his cacio e pepe, says the accessibility and affordability of his dishes is a selling point: “It’s like, ‘Oh, I’ve got this in the cupboard already.’” She also finds an iPhone an easier medium to have at hand than a cookbook.

Most of these chefs are followed by like-minded millennials, who both utilise the recipes and attend their IRL cooking events. Tickets for Straker’s three-day takeover of small-plates eatery Top Cuvée in October sold out in eight minutes, while many of Shota Nakajima’s 80k-plus followers flocked to the reopening of Taku, his Seattle-based karaage restaurant, in May. Rushen utilises the “sneaker drop” format to sell tickets to his pop-ups through Instagram – he’s cultivated a crowd of Supreme-wearers that he describes as “very young, very hypebeast-y”. Canadian chef Matty Matheson, meanwhile, arguably the original chef bro, draws the crowds when he pops up in Toronto.

Some of them have become brands in themselves. Rushen and Matheson have even sold T-shirts (£25). It allows for more playfulness and variety in their cooking. Traore, who recently cooked on-camera for Louis Vuitton, offers recipes for everything from tomato salads to spicy harissa shrimp, while Rushen has experimented with pickled-onion Monster Munch on oysters – he describes the texture as “crispy vinegar”.

Instagram has also become a chef’s visual CV. “People who might not have eaten my food before ask me to collaborate,” says Rushen. It’s shifted a chef’s career trajectory – traditionally rising through the ranks to head chef before getting a restaurant, cookbook and TV deal – to something more fluid and multifaceted. “Chefs would previously become known for their restaurants, but now we’re known for being us,” says Straker. Rushen says it’s democratising the food world. “Restaurants have realised food can be fun… they know I’ll bring something different to the table.”

Now, even amateurs are turning frying into flourishing new careers. Will Hughes, aka What Willy Cook, got into cooking in late 2019 – his tagline is “recipes, not stressipes”. The 25-year-old former post-production runner initially posted a jokey clip of himself whizzing up a Bourbon-biscuit milkshake to make his friends laugh. “It was gross,” he says. But his filmic approach – where a green screen cut-out version of himself is superimposed on top of the pans, and soundtracked by the deadpan droll of a narrator – took off. He now has 180k followers and has even launched a knife collection. Shot at home on his iPhone, each one to two-minute video takes three to four hours to edit: with comic fonts and a silly, surrealist mood, the finished clips call to mind the ’90s British kids’ TV programme ZZZap!.

Experimental video apps such as TikTok have further whetted the appetite for snackable shorts. “I’m not a trained chef, so the goal for me was just to entertain,” says Hughes. Nevertheless, his community of young urbanites flock to devour his hot dogs and burgers across the capital.

There’s also a burgeoning market for fan clubs. Bad Boy Pizza Society started out as a slice-appreciation club but has since taken dough-lovers on field trips to Italy and opened restaurants in London; it sells scarves emblazoned with “Bad Boy 4 Life” (£25). The Bistro Boys, meanwhile, dedicate themselves to “glorifying gluttony… from greasy spoons to silver spoons”, according to Jacob Horobin, a train engineer who runs the group along with founder Jakub Karn. “Social media has given the foodie subculture a platform.” Karn, a welder and football fan, says food “unites people in the same way a sports team does”. In a similar pledge of allegiance, the duo created T-shirts and totes (from £15) for their “Sunday Sips” – a jovial activity largely fuelled by gallons of natural wine.

Chefs, restaurants and foodie fans now follow one another on Instagram, and turn their appreciation into real-life events. “We’re on the verge of a new scene,” says Rushen, who has collaborated with Hughes.

This fusion feels more like a casual dinner among friends than the lofty echelons of the establishment – a sort of pub afterparty that everyone is invited to. “Food and Instagram are both designed for sharing,” says Rushen. Been there. Ate that.