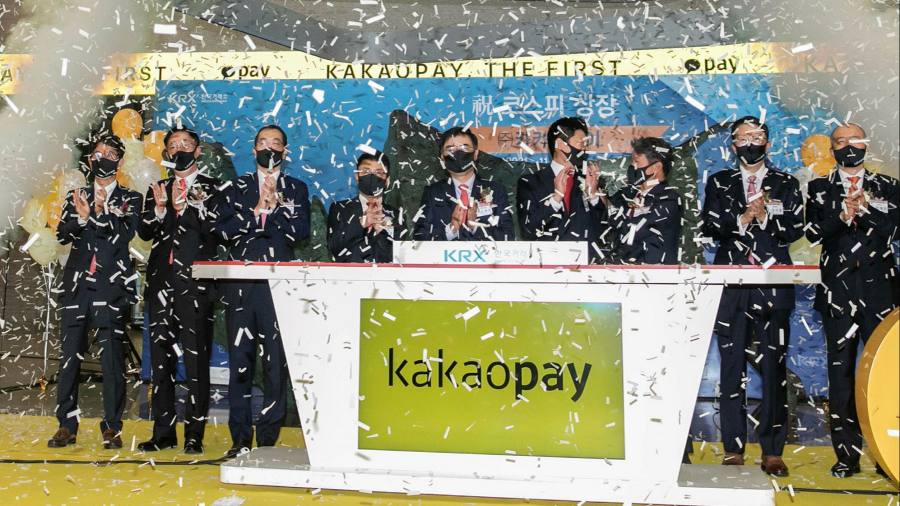 Shares in Kakao Pay, South Korea’s most popular mobile payments app, more than doubled on Wednesday as the company made its delayed stock market debut.

Backed by Ant Group, Jack Ma’s financial technology company, Kakao Pay had planned to go public in August but its IPO was delayed after regulators asked the company to revise its prospectus amid wider concerns about frothy valuations.

Shares in the company rose sharply from their initial public offering price of Won90,000 ($76.50) to trade as high as Won230,000 before falling back to Won182,000, according to data from Refinitiv, giving the company a stock market capitalisation of about Won21.2tn.

Kakao Pay had raised Won1.53tn ahead of the start of trading giving it a valuation of Won11.7tn.

The company intends to use the money raised from the IPO on mergers and acquisitions and to seek partnerships with global fintech companies to spur a push into overseas markets.

Kakao Pay was spun off from Kakao Corp, its parent company, in 2017 and offers mobile payment, remittance, insurance and loan services. The app has benefited from rising investor and consumer interest in mobile payments during the pandemic.

But South Korean regulators have intensified scrutiny of big IPOs in recent months over worries that overly high valuations could lead to a bubble.

Krafton, the gaming company backed by Chinese internet group Tencent, was forced in July to lower its IPO price by more than 10 per cent and cut the deal size by almost a quarter after regulators asked for more information on its calculations. Krafton’s shares fell as much as 20 per cent on their first day of trading.

Kakao Pay’s IPO was stalled after new legislation came into force requiring apps that provide financial services to be licensed by regulators. The revised Financial Consumer Act Protection Act is expected to be part of a wider push for fintech companies to be subjected to regulations similar to those that are applied to traditional financial institutions.

Hwang Sei-woon, a senior research fellow at the Korea Capital Markets Institute, said trading in Kakao Pay’s stock would probably be turbulent in the coming days.

“It was a little bit surprising to see the share price double, because I thought even the offering price of Won90,000 was quite high given that financial regulators appear concerned about Kakao Pay’s business model,” he said. “I would expect high price volatility for the next few trading days.”