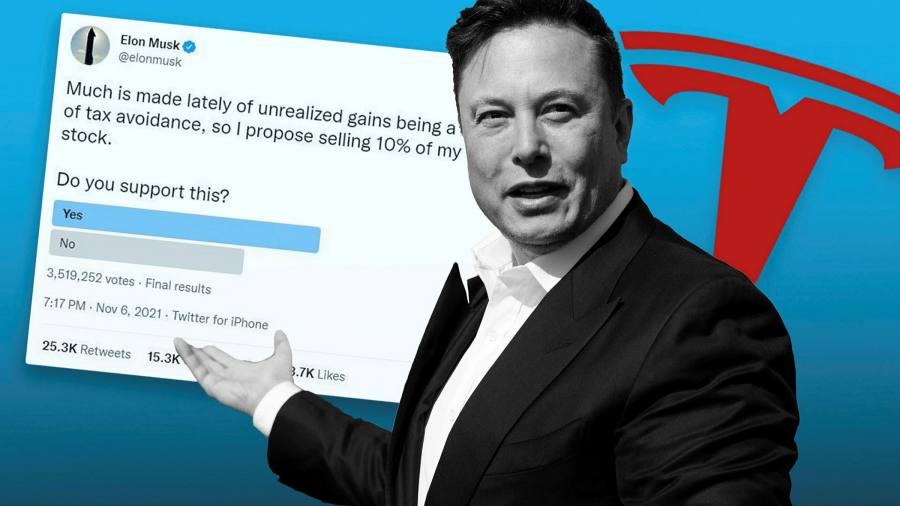 Elon Musk’s latest stunt is an example of trolling. That much is obvious. What is less clear is who exactly is being trolled. The controversial Tesla chief executive has said that, following the results of a Twitter poll, he will sell roughly a tenth of his shares in the company, incurring the tax liability on his capital gains. This was, he said, a response to increasing claims that “unrealised capital gains are a form of tax avoidance”.

Shares plunged in response but it is not clear if shareholders were the victims of the prank. If Musk had sold his stake another way — quietly with nothing but a regulatory statement to the market, for example — then they might have dropped further. Investors could have taken fright at the idea there was some undisclosed bad news still to come out about the company. Instead Musk can realise some of his gains while saying it was just in response to the social media poll, providing justification for the sale.

It is unlikely to be a joke on the taxman. Musk tweeted that he does not take any salary or bonus from Tesla, meaning he usually has no income to tax. All he owns is stock and so, if he is to pay the government anything, then he has to sell some of his holdings. With the value of Tesla rocketing, he will face substantial capital gains tax if he sells, even after the big drop in the share price.

The proceeds will also allow him to pay an income tax bill on billions of dollars’ worth of stock options that expire next year; Musk himself says that he will pay a marginal income tax rate of over 50 per cent on the deal and is concerned that taxes will rise. The Tesla co-founder could skirt having to sell some of his stock to pay the bill by borrowing against it — a method of tax optimisation used by many billionaires. Musk, however, has previously borrowed against Tesla shares and may, at this point, be willing to pay tax instead of taking on debt.

Even without the bill coming due, Musk would probably be smart to sell. The company is the most valuable carmaker in the world — with its market capitalisation soaring to above a trillion dollars earlier this year. In 2020 Musk was already tweeting that its stock price was “too high”. Taking a bit of profit and diversifying into other assets would be a financial decision that many wealth managers would counsel.

Perhaps the victim of the joke was the Securities and Exchange Commission. The agency is already the source of much of Musk’s ire after he was forced to reach a settlement with the regulator in 2018 over tweeting that he had “funding secured” to take the company private at a price of $420 per share. The SEC found that the tweet was untrue and amounted to securities fraud. So long as Musk follows through on the result of the Twitter poll, and does sell a tenth of his holdings, he is probably on safer ground. He is, all the same, thumbing his nose at the agency.

Democrats who would like him to pay more tax — some senators briefly tried to introduce a billionaires’ tax last month — are another target for mockery. Musk warned his Twitter followers last week, before running the poll, that eventually the senators would run out of “other people’s money”.

Whatever else it is, the prank is not the ideal for corporate governance. Indeed it should come with a “don’t try this at home” warning for other chief executives and major investors. Musk’s online antics are part of his star power attraction for legions of devoted investors. Corporate bosses who do not command such loyal support may find that shareholders are less enthusiastic too.