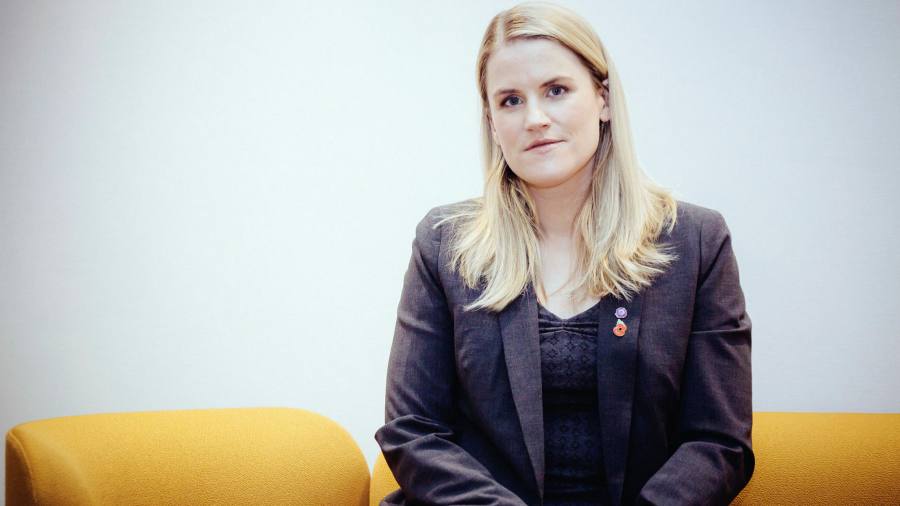 Facebook whistleblower Frances Haugen has warned that the EU and the UK “will have missed a huge opportunity” if they do not broaden the scope of new digital laws to force tech companies to keep harmful content off their sites.

The EU and the UK are in the process of passing landmark legislation that will hold tech companies liable for any illegal content on their sites, such as hate speech or posts that incite violence or terrorism.

But Haugen, speaking to the Financial Times after her testimony to the European Parliament on Monday, said limiting the scope to illegal content would be a mistake.

She claimed that Facebook’s algorithms can quickly pull people down into psychological rabbit holes. “In the case of kids, they can follow very neutral interests like healthy eating and be drawn into anorexia content,” Haugen said. “That is not illegal, but it is really harmful and kids die as a result of those things.”

Haugen’s comments come at a particularly tense point in discussions among member states and lawmakers in Brussels over the upcoming Digital Services Act. France, in particular, has been aggressively pushing for harmful content and disinformation to be policed by Big Tech as part of new legal obligations.

In the UK, legislators drafting the online safety bill have struggled to define which legal harms, such as bullying or misinformation, would be within the scope of the new law. They have faced pushback from tech companies and free speech advocates who believe it will result in too much censorship.

Haugen also said that legislators needed to discuss the risks of advertising.

“We have a lot of issues with ads, where I think having a specific bill that approaches them is really important,” she said. “People are getting targeted with diet ads that are extreme, which is why Facebook has banned those ads for children, because they know they are dangerous.”

Facebook says it restricts diet ads for all users.

Haugen said the laws being drafted in Europe and the UK would be replicated in other countries, and had the potential to push companies such as Facebook to change their systems, similar to their response to the UK’s Children’s Code which came into force in September.

“Let’s imagine a world where Facebook has to disclose what safety systems existed and what languages they were in and the efficacy of those systems. Even if they only did this for European content, researchers around the world would have a window into how Facebook works . . . and there would be pressure for them to improve,” she said.

Haugen has given hours of testimony to legislators and regulators in the US, the UK and Brussels, and is due to give evidence to French regulators before heading home to Puerto Rico. She says she doesn’t regret going public with her identity or the internal Facebook documents.

“Whistleblowers are only going to get more and more important for society — technology is accelerating ever faster and the only people who understand these technologies are people inside the companies,” Haugen said.