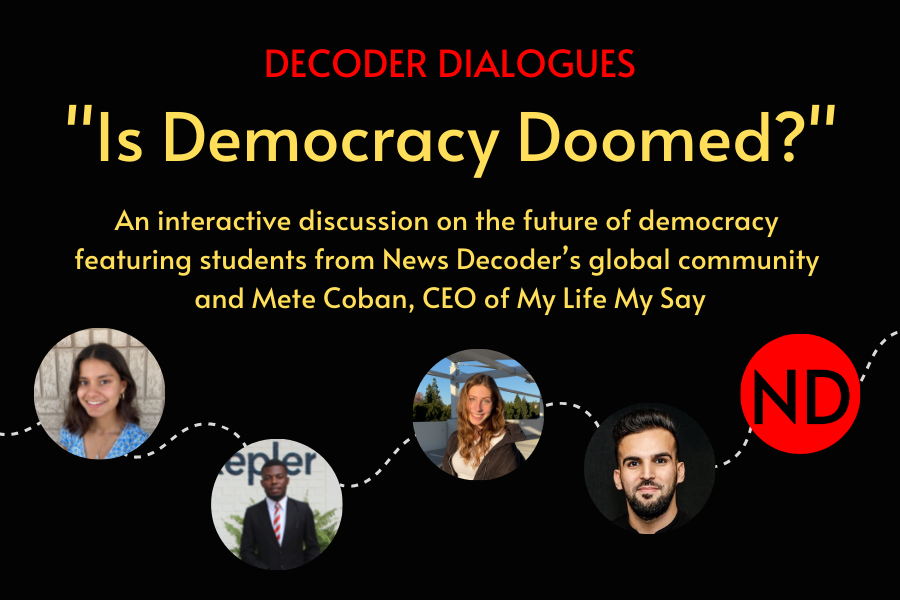 Democracy might be in trouble around the world, but it will survive the challenges it is facing in the early 21st century.

That was the strong opinion of the audience for News Decoder’s first “Decoder Dialogue” public webinar on November 10, which featured a virtual round table with a leading UK democracy advocate and students from Europe and the United States.

Mete Coban, founder and CEO of My Life My Say, told viewers from around the world about his non-partisan charity that empowers young people to participate in democracy. Students from Belgium, Romania and the United States described the political systems in those countries and answered questions from participants in the first in a series of News Decoder public webinars.

The webinars are one of the new resources, announced during News Decoder’s annual fundraising campaign which ends this week, that the educational nonprofit is offering to the global public to complement its work with its 22 academic partners in 17 countries.

During the hour-long webinar, participants were asked if democracy — which surveys show is under assault in many parts of the world — would survive. More than 80% said it would, even though according to the Economist Intelligence Unit fewer than one in 10 people live in full democracies while more than 1/3 of the world population lives under authoritarian rule.

‘Democracy is under challenge and messy — but it can work.’

Asked if democracy is unwieldy and ill suited for the types of decisions that need to be taken by modern nation states, Octavian-Anton Ghisa of Transylvania College in Romania said: “I think if you look back in history, when you choose only one leader or one or only one group to make decisions for a whole country, it never turned out well in the long run.”

Maya Blenkinsop of the European School of Brussels II in Belgium said the solution is not to opt for a small group of “great minds” to lead a country: “It could be easier, but how do you choose who’s empowered then?”

But she noted that participation picked up in the 2020 presidential election, and she stood by the single-representative constituencies that characterize the U.S. system. “One of the aspects of the American democracy I appreciate the most is that candidates are held responsible because they are directly elected,” Jaffee said.

The students agreed that while democracy can be messy, it can work. “You just have to trust that the people in power want the best for the country and are able to work together, in order to ensure that the best is produced,” Ghisa said.

(Nelson Graves is the founder of News-Decoder. For a replay of the entire webinar, click here.)