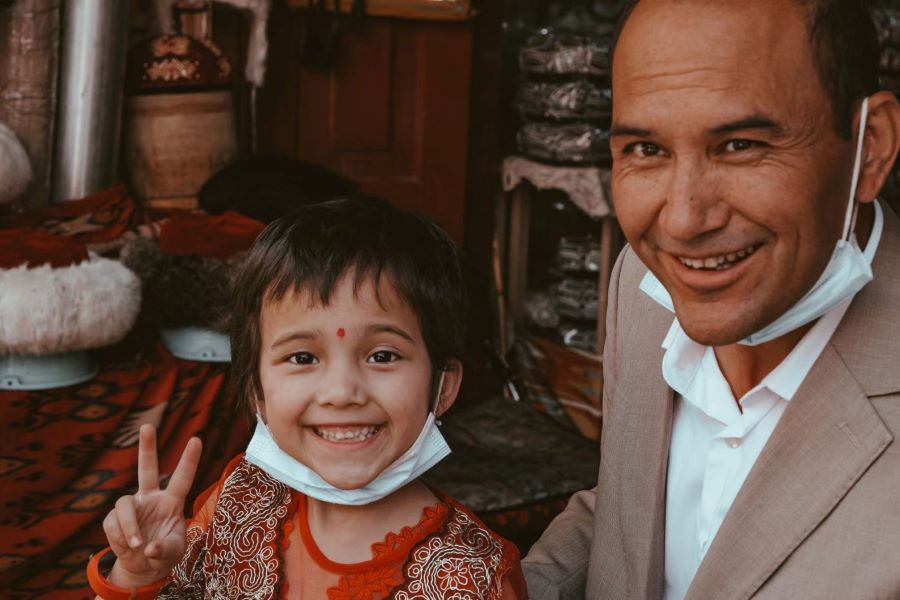 I took these photos on a visit earlier this year to Xinjiang Uighur Autonomous Region (XUAR ) in China, while wandering around the cities of Urumqi and Kashgar.

After connecting recently with the Uighur and Middle Eastern ancestry on my father’s side of the family, I wanted to learn more about the lives of those who lived in this seemingly mysterious and frequently discussed region.

As I talked with locals, I realized that Uighur communities have been hit hard by the COVID-19 pandemic. Due to China’s stringent COVID-19 travel restrictions and lockdown measures over the past 18 months and more, tourism to the XUAR has been limited and an absence of consumers has meant little to no profit to local small businesses.

Still, there remains a sense of optimism and goodwill in the air.

Mr. Abduweli is an instrument-maker featured in one of the photos below. He told me that although he cannot sell as many instruments and toys as before, he now enjoys ample time to perform music for his family after working in the fields during the day.

Uighurs in China suffer much pain.

Although the photographs capture laughter and a celebration of culture, it is important to note that there is much ongoing pain in Uighur communities, not caused by COVID-19, that deserves attention.

Internal Chinese government documents leaked in late 2019 and satellite images indicate that what began in the early 2010s as an effort by the Chinese Communist Party to secure Xinjiang from potential terrorist threats has evolved into mass detention, ideological reeducation and forced sterilizations of Uighurs. Since 2014, Chinese authorities have used cutting-edge technology to monitor millions of people.

“The Chinese government has imprisoned more than one million people since 2017 and subjected those not detained to intense surveillance, religious restrictions, forced labor and forced sterilizations,” according to the Council on Foreign Relations, a U.S. think tank.

The Chinese government denies the mistreatment of Uighurs and defends its policies, saying they are necessary to ensure social stability. They say the alleged detention camps are vocational and education centres.

Xinjiang features a grid-management system in which cities and villages are split into squares of about five hundred people. Each square has a police station that regularly scans citizens’ identification cards, takes their photographs and fingerprints, and searches their cell phones.

In Kashgar, there are police checkpoints every 100 meters or so and numerous facial-recognition cameras.

To read more about Xinjiang, check out the following links: